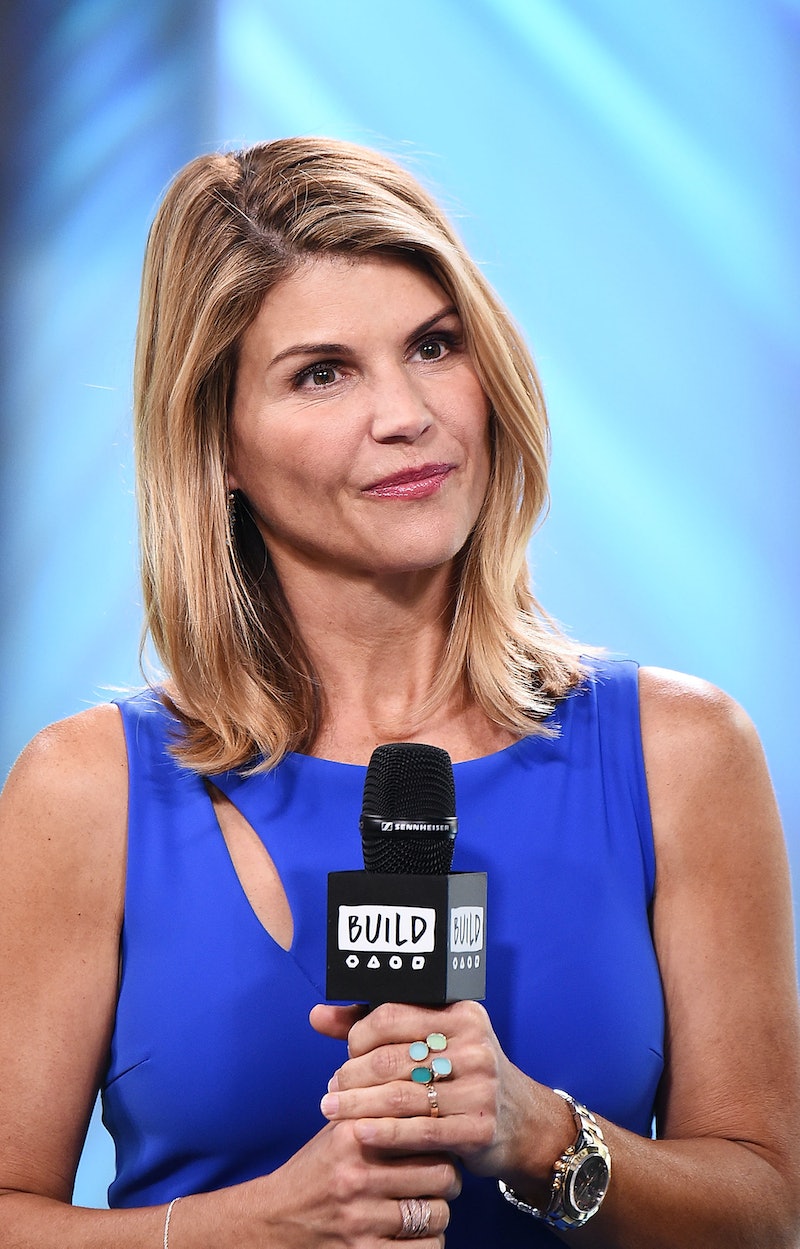 A grand jury in the District of Massachusetts brought a new charge against Lori Loughlin in the college admissions scandal, according to a statement published by the Department of Justice on Tuesday. Loughlin and 10 other parents, who have pleaded not guilty in the case, are now facing a charge of alleged conspiracy to commit bribery for paying officials at the University of Southern California for their children's admissions to the college. The new charge is reportedly an effort to crack down on the consequences for the defendants, according to the New York Times. (Bustle reached out to Loughlin's reps for comment, but did not immediately receive a response.)

Loughlin, Felicity Huffman, and 31 other parents were charged in the scandal in March when prosecutors uncovered an alleged criminal conspiracy to influence college admissions at top universities through bribery and other forms of fraud, according to the Times. Loughlin and her husband Mossimo Giannulli, who was also hit with the new charge on Tuesday, are accused of allegedly paying $500,000 to portray their daughters Olivia Jade and Isabella as crew recruits in order to gain admission to USC, even though they did not play the sport. Loughlin and Giannulli pleaded not guilty to these charges in April, as reported by CNN.

The new charge follows Huffman’s indictment in September. Prosecutors were reportedly disappointed with the sentences given to Huffman and other defendants who pleaded guilty, which ranged from zero to five months of jail time, as per the New York Times. Huffman was one of 12 parents to plead guilty to fraud and conspiracy in May. The Desperate Housewives actor reported to a low-security prison for women in California on Oct. 15 to serve a 14-day sentence. Huffman was the first parent to be sentenced in the highly-publicized scandal that involved elite schools such as USC, Yale, Stanford, and Georgetown.

A day before the new charges were brought against some parents, USC Registrar confirmed to People on Monday, Oct. 22 that Loughlin’s two daughters were no longer enrolled at the university. The statement said, “We are unable to provide additional information because of student privacy laws.”

Loughlin has not released any official statements through her reps or attorneys since the scandal broke in March. In an exclusive published in August, however, a source told People that the Full House actor was “remorseful” and “has definite regrets” in her alleged role in the scandal. “She knows that her reputation has been ruined for life,” the source said.

More like this
The Meaning Of Steve Lacy’s “Bad Habit” Lyrics
By Radhika Menon
Olivia Rodrigo Manifested Finally Meeting Demi Lovato
By Jake Viswanath
Paris Hilton & Carter Reum’s Relationship Timeline Includes A 2023 Grammys Date Night
By Bustle Editors
The History Of Taylor Swift's "All Too Well" & What The Lyrics Actually Mean
By Jake Viswanath
Get Even More From Bustle — Sign Up For The Newsletter
From hair trends to relationship advice, our daily newsletter has everything you need to sound like a person who’s on TikTok, even if you aren’t.