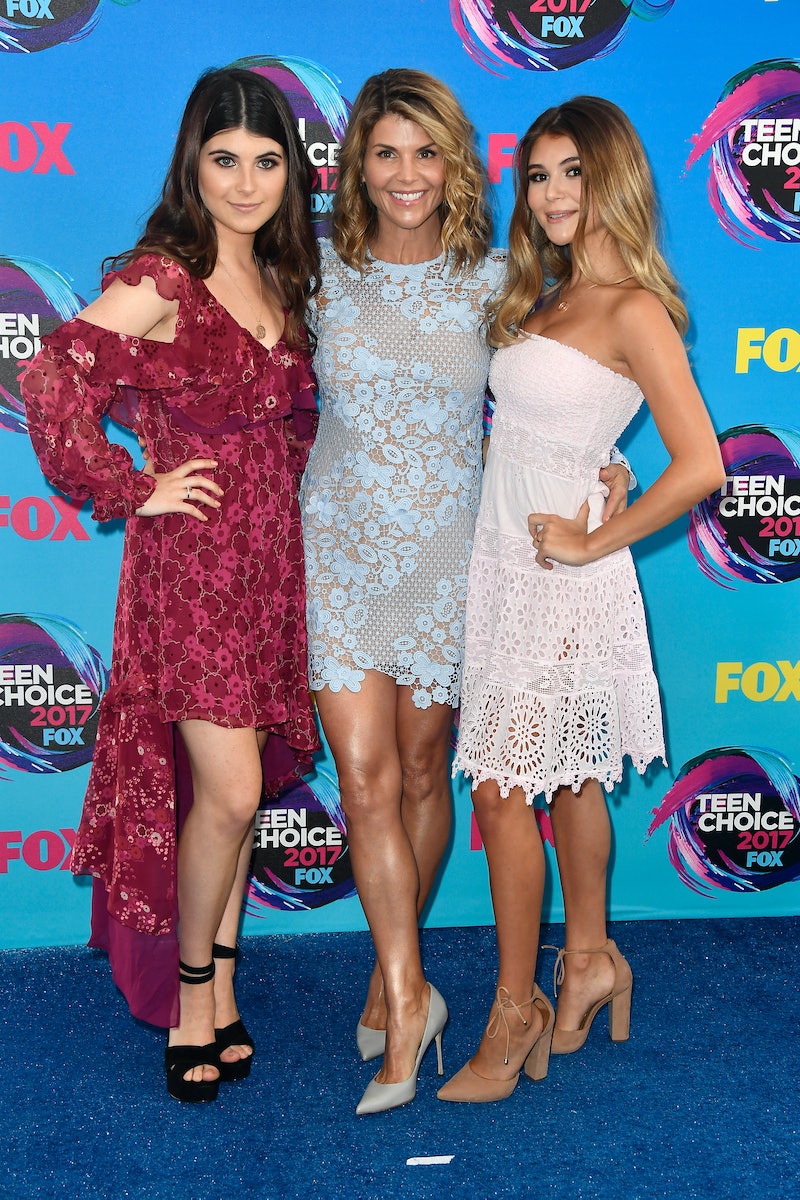 Plenty of eyes are on Full House star Lori Loughlin and her family during the ongoing college admissions scandal. On April 15, Loughlin and her husband Mossimo Giannulli pleaded not guilty to the charges of fraud and money laundering. Now, Loughlin's daughter Bella Giannulli has deleted her Instagram account, presumably in an effort to step away from the glaring spotlight, according to a report by Entertainment Tonight on April 17.

Loughlin deleted her own Instagram account in March, according to Country Living. In that same article, it was revealed that Bella set her Instagram to private. (Loughlin's rep had no comment regarding her deleted Instagram account when Bustle previously reached out.) Meanwhile, Loughlin's other daughter Olivia Giannulli still has her Instagram account and it's set to public. However, she hasn't posted anything since Feb. 28, and she has removed the ability to comment from most of her posts.

Bella isn't completely off of social media, though. The 20-year-old still has a Twitter account, but she's not particularly active on the platform. The last post on her account is a retweet on Feb. 1. Before that, she shared her last original tweet on Jan. 10 and the last tweets she "liked" were posted on March 12.

Bella has been laying low since the scandal emerged. However, she and her sister Olivia reportedly attempted to drop out of the University of Southern California, according to TMZ, but apparently that's not even an option at this moment. USC is currently investigating students on a case-by-case basis if they are associated with the scandal.

The university released a statement that read:

"USC has placed holds on the accounts of students who may be associated with the alleged admissions scheme; this prevents the students from registering for classes (until they have agreed to participate in the review of their case), withdrawing from the university, or acquiring transcripts while their cases are under review."

The statement also said, "Following these case-by-case reviews, we will take the proper action related to each student’s status, up to revoking admission or expulsion."

As of this moment, it's unclear if the sisters are still turning in assignments and attending classes. On March 24, USC Media Relations Specialist Ron Mackovich told NBC News, "We have confirmed that both Olivia Giannulli and Isabella Giannulli still are enrolled."

No charges have been brought against Bella or Olivia, but their parents are accused of allegedly paying $500,00 in bribes to get them into USC as members of the crew team. However, neither of them has reportedly participated in the sport.

Entertainment Tonight confirmed that Loughlin and her husband were charged for the conspiracy commit fraud and money laundering. Each of those crimes has a maximum of 20 years in prison, meaning that they could face 40 years in prison if they get convicted and have to face the maximum penalties. They could also pay $250,00 if they are guilty of fraud and $500,000 if they are guilty of conspiracy to commit money laundering.

With so many updates about this ongoing saga, it makes sense that Bella would want to step away from Instagram, at least temporarily until things get situated with her parents. Will Olivia be the next family member to deactivate her Instagram account? Time will tell if she follows in her sister's footsteps.