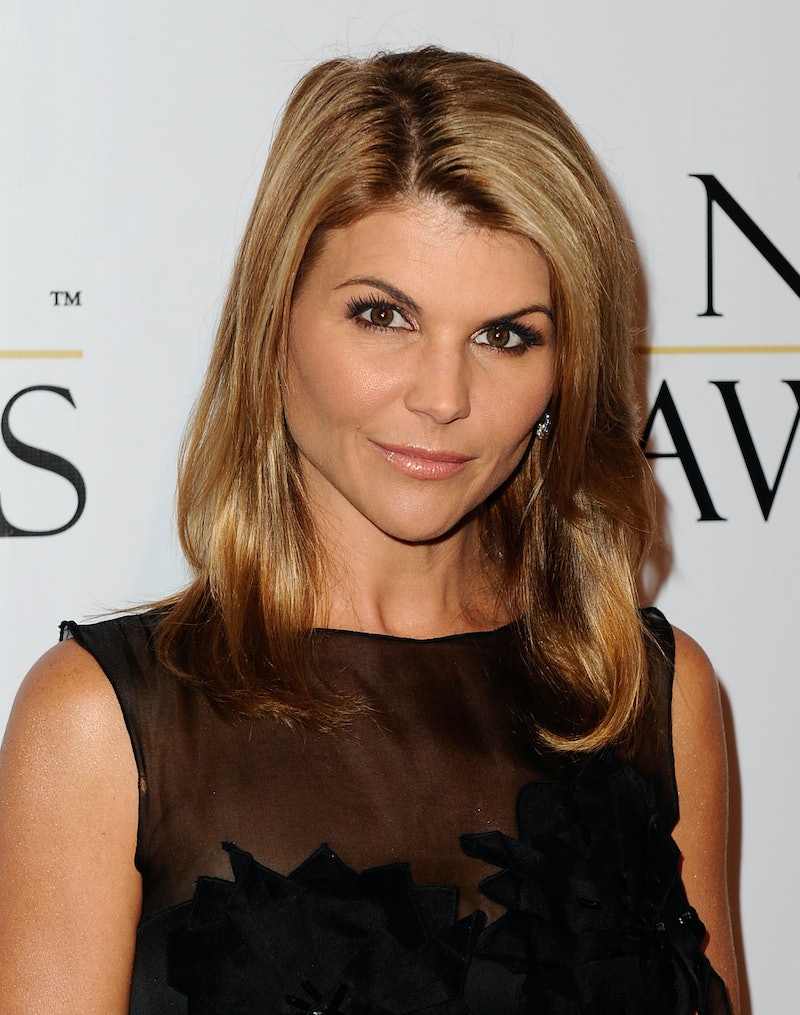 On Tuesday, March 12, the FBI announced that they were charging more than 40 people, including actors Lori Loughlin and Felicity Huffman, in the largest college admissions cheating scam prosecuted in the United States, according to ABC News. Later that day, Loughlin's social media accounts were deleted amid the allegations. Both her Instagram and Twitter accounts no longer existed on Tuesday afternoon, following the strong online reaction to the news, which resulted in her name, as well as the moniker of her Full House character "Aunt Becky" to become trending topics on Twitter. (Loughlin's rep had no comment for Bustle on the social media deletion.)

E! News additionally noted that Loughlin's daughter Isabella Rose Giannulli has now made her Instagram profile private amidst the allegations. Loughlin's other daughter, Olivia Jade Giannulli, a current student at USC and social media influencer, still has both her IG and YouTube channels still set for public viewing.

The Associated Press reported that dozens of suspects, including Huffman and Loughlin, allegedly paid between a few thousand dollars and $6 million to have their children accepted into elite and Ivy League colleges. Huffman was arrested earlier today by federal agents, and there is currently a warrant out for Loughlin's arrest, according to NBC News. (Bustle reached out to Huffman and Loughlin's reps for comment, but has not received a response.)

Coaches from Wake Forest University, Georgetown, and the University of Southern California were also charged with racketeering conspiracy for accepting bribes, according to the AP.

Court documents, which were obtained by E! News, additionally shared:

"Beginning in or about 2011, and continuing through the present, the defendants — principally individuals whose high school aged children were applying to college — conspired with others to use bribery and other forms of fraud to facilitate their children's admission to colleges and universities in the District of Massachusetts and elsewhere, including Yale University, Stanford University, the University of Texas, the University of Southern California, and the University of California – Los Angeles, among others."

The sting, dubbed "Operation Varsity Blues," was outlined by the U.S. Attorney's Office for the District of Massachusetts and pointed out William Rick Singer as the alleged operation's ringleader. The indictment charges claim that Singer was the owner and operator of an admissions consulting business, which was designed to help students get into their college of choice. (Bustle reached out to Singer for comment, but has not yet received a response.)

Prosecutors alleged that Loughlin and her clothing designer husband Mossimo Giannulli allegedly paid $500,000 to have their two daughters admitted as recruits for University of Southern California's crew team at despite their daughters never participating in crew, according to TMZ. For her alleged actions, Loughlin is facing a felony charge for conspiracy to commit mail fraud and honest services mail fraud, according to NBC News. If convicted, she could face up to five years in prison, according to E!. Page Six reported that Loughlin's husband is also facing similar charges.

During the press conference, according to the Washington Post, Andrew Lelling, an attorney with the U.S. District Court for the District of Massachusetts, said "These parents are a catalogue of wealth and privilege." He added that "all of them knowingly conspired with Singer" to get their kids into elite colleges. Other parents charged include prominent CEOs, company founders, and business executives.

It's unclear what exactly led Loughlin to delete her social media accounts, but the strong social media response to the allegations may have played a part.