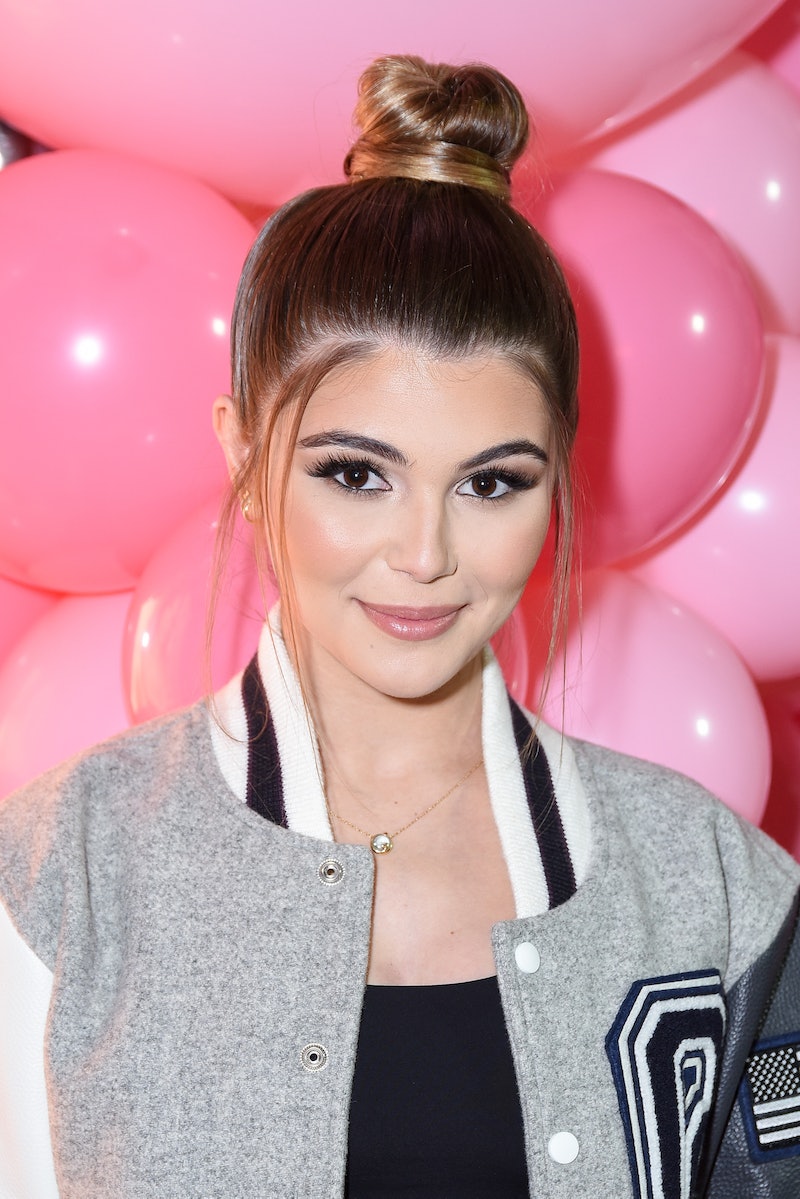 After laying low for a bit, Olivia Jade Giannulli isn't shying away from the spotlight anymore. Over the weekend, Lori Loughlin's daughter Olivia Jade responded to rumors about her family via Instagram, and her message truly could not be more clear. Back in March, Loughlin and husband Mossimo Giannulli were indicted in the college admissions scandal; the two were among nearly three dozen people accused of scheming their children's way into elite colleges or universities, per the New York Times. Since the scandal broke, many media outlets have reported that the Giannulli family is in tumult, and Olivia appeared to be responding to these stories publicly for the first time.

On Sunday, Aug. 11, Olivia posted a photo flipping off the camera on Instagram, posing in a Snoop Dogg t-shirt and smiling. The photo, which appears to be taken in the backyard of her Los Angeles' home, seems to be a direct response to recent reporting on the scandal, which often cites close sources. The 19-year-old went on to call out a number of media outlets in the caption (including a generic "every other media outlet"), writing:

Friends and family commented on the post to show support for the statement. Her sister, Bella Giannulli, wrote, "not over this and you - QUEEN" with a crown emoji. Later, she posted another comment, writing, "she hot." Kylie Jenner's BFF Anastasia Karanikolaou wrote, "there she is."

In March, the federal investigation referred to internally as "Operation Varsity Blues," revealed that Loughlin and Giannulli allegedly paid multiple bribes up to $500,000 to have Bella and Olivia admitted to the University of Southern California as recruits for the crew team, despite the fact that neither daughter had ever played the sport, according to the Times. In April, Giannulli and Loughlin were indicted on an additional charge of money laundering, as per the Hollywood Reporter. Both parents pleaded not guilty and were released on a $1 million bail bond.

Meanwhile, Olivia, who was a YouTube personality and social media influencer, lost brand deals with TRESemmé, Sephora, and Too Faced following the news, according to Variety. Neither daughter is likely to resume class at USC in the fall, and numerous news stories have emerged citing tension in the family. In March, ET Online reported that Olivia was angry at Loughlin and Giannulli for getting in the way of her career. Then, in May, she rumored to have moved out of the family home, as per People.

With Olivia's recent Instagram, and her sister Bella's supportive comment, they made clear they reject any rumors about the situation. However, given the pending trial and high-profile nature of the college admissions scandal, it's unlikely coverage of Loughlin or Giannulli's involvement will stop anytime soon.