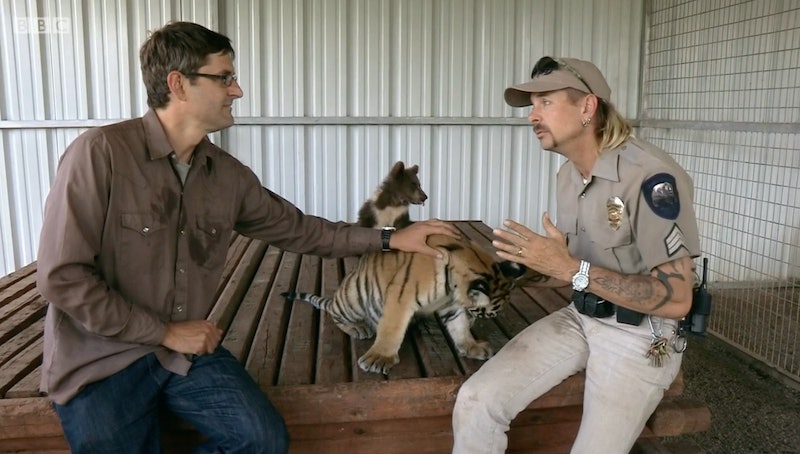 A series following the bizarre world of big cat ownership in America wasn’t exactly the series I was planning to get hooked on during lockdown, but here I am. Netflix’s Tiger King: Murder, Mayhem and Madness has opened my eyes to a world I never knew existed. Seven episodes were clearly not enough, but as it turns out, Louis Theroux has his own documentary with Joe Exotic from Tiger King.

Theroux experienced the bizarre world of GW Exotic Animal Foundation in Oklahoma, where he followed Joe in his day-to-day activities while running one of the largest big cat collections in the world. Initially broadcast in October 2011, the episode is available to watch in all its glory on BBC iPlayer. Theroux’s trademark deadpan expressions were in full force here, especially when reacting to Joe’s reasonings behind breeding captive tigers and lions.

Joe also convinced Theroux to get hands-on with the cats (the small ones, mind you), which involved Theroux trying his best not to freak out beside a bear and tiger cub that were a little too playful for comfort.

The doc doesn’t go as in-depth as Tiger King does into Joe’s backstory, instead, it covers the inner-workings of the park and how he and his crew take care of the cats. There is a section where Theroux briefly dives into Joe’s relationship with his husbands, providing a throwback of sorts to the documentarian’s roots on his Weird Weekends series in the early 2000s.

While the episode focuses largely on Joe’s sanctuary, Theroux also travels to two other exotic animal owners. Tim Stark of Wildlife In Need (which he has since lost the license for) features partway through the episode, who too owns a bunch of big cats and bears in Charlestown, Indiana. Theroux also visits the home of Jill and Brad James, who are one of the very few chimpanzee owners in America.

The most controversial of all exotic pets, Theroux makes light of the “Travis incident” during the episode. Owned by Sandra Herold, this chimp “viciously attacked a human neighbour” in 2009, “ripping off her face and chewing off several of her fingers,” as Theroux wrote in BBC’s magazine in 2011. “Chimp owners,” like Jill and Brad, “have been fighting an uphill publicity battle ever since.”

There’s a reason why this documentary bears the title America’s Most Dangerous Pets, and Theroux sure does prove that point.