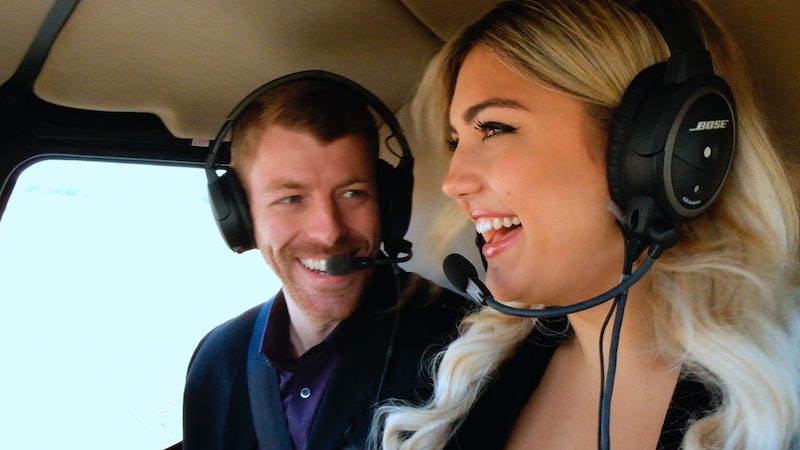 People are willing to do weird things in the name of love — including catfishing unsuspecting singles in order to convince them to take part in a "dating experiment" on Netflix. During a recent appearance on The Ellen DeGeneres Show, Damian revealed he was catfished by a Love is Blind casting producer, who convinced him to appear on the show after they "hit it off" on a dating app.

Damian — who appeared on Ellen alongside girlfriend, Giannina Gibelli as well as Amber Pike, Matt Barnett, Lauren Speed and Cameron Hamilton — shared his story after host Ellen DeGeneres asked the group how they all decided to take part in the reality TV experiment in the first place. "They actually found me on Tinder," Damian confessed, adding that he had probably "one of the most interesting" casting stories.

"I started chatting with this girl, we hit it off, she’s like, 'Add me on Instagram,'" he recalled with a laugh. "We had, like, a pretty good connection and then she’s like, 'I’m a casting producer, and I’m a catfish.' So now, I’m here." (Coincidentally, Giannina was also recruited over social media, as a producer DMed her on Instagram as she was bemoaning the lack of single men in the city where she lived.)

Thankfully, Damian's catfish experience has a happy ending, as he met Giannina on the show. Despite plenty of ups and downs — and an incredibly dramatic wedding day breakup — the couple revealed on the Love is Blind reunion that they're back together. "When we were going through all of that [drama], I think he realized, maybe we need to be best friends first," Giannina told DeGeneres about her reconciliation with Damian. "I really respect his decision — obviously, we're dating. Everything happens for a reason."

During the reunion, the Instagram influencer shared that she felt Damian's decision to break up with her at the altar ultimately helped them arrive at a happier, more stable place in their relationship. "I feel like where we are now, it's so right for us," Giannina said at the time. "We're getting to know each other at our own pace and it's just so refreshing. It hurt so much, but it's all about, 'What can I do with that?' and 'What did I learn from that?'"

While Damian apologized for the "hurt and embarrassment" he put Giannina through on their wedding day, he admitted that he doesn't regret calling off the wedding. "It was the hardest decision I probably ever made in my life, honestly," he told her. "And I would stick by it again because of where we are now."

And based on what they told DeGeneres about their future plans, it seems like where they are is better than ever. "We've become best friends now," Damian explained on the talk show. "We really want to travel together a little bit more. We're not living together, but we spend all our time together." In response, Giannina added, "We're taking it at our own pace, which is great." They may not have gotten married on the show, but clearly, these two found love in those pods, after all.