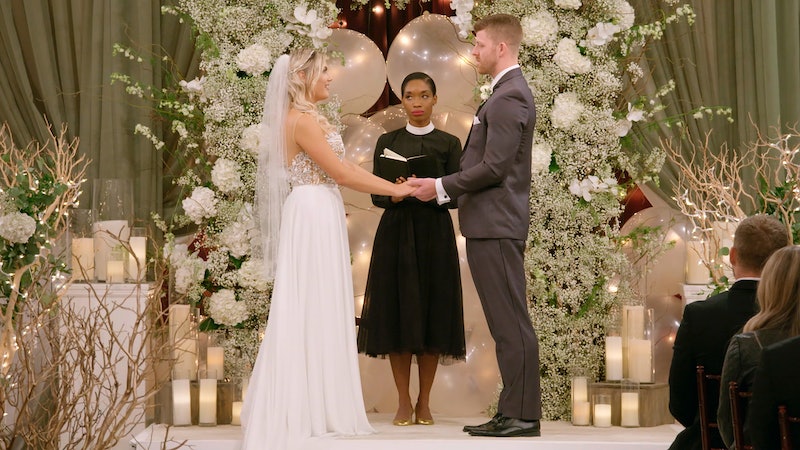 Spoilers ahead for the Season 1 reunion of Love Is Blind. They may not have gotten married on Love is Blind, but a year and a half later, Giannina and Damian are back together. "We are so together," Giannina revealed during the show's reunion special. "Every single day, waking up next to each other, going to the gym together. I don't wanna lose this."

Though the two still haven't said "I do," they are currently dating and living separately in Atlanta. The last 18 months has afforded them both some self-reflection, and watching the show back helped them to recognize their mistakes and learn to grow from them. "Looking back, I respect [Damian's] decision," Giannina said, referring to his "I don't" at the altar. "I feel like where we are now, it's so right for us ... We're getting to know each other at our own pace and it's just so refreshing. It hurt so much, but it's all about, 'What can I do with that?' and 'What did I learn from that?'"

After rewatching the footage from their post-wedding confrontation, Nick asked Damian if, in retrospect, he would've done anything differently. Tearfully, he said no. "It was definitely a strong love from the beginning," he said. "I wanted it every day since the day I told her I loved her in the pods. And it turned into our love story, but she was in and out of it so much."

Damian was referring to their many arguments on the show, and Giannina's back-and-forth feelings about "losing her butterflies" for him. He actually didn't think she would agree to get married, but had every intention of leaving the show still with her.

"When she said I do, I didn't expect that," he said. "I wish I could take the pain away from that day, and the hurt, and the embarrassment. To her family and friends, I'm sorry that I ever put her through that." He also apologized to Giannina directly, adding, "It was the hardest decision I probably ever made in my life, honestly. And I would stick by it again because of where we are now."

After filming for Love is Blind wrapped, the couple had a lot to come to terms with. "I was so afraid of driving this person away that I was instinctively doing it anyway," Giannina explained. "I self-sabotage, and I'm aware of that. And I felt that because we were in the pods and we communicated so well, that he could instinctively tell that. But he couldn't. He couldn't read my mind, he couldn't know these things. So when I felt frustrated, I just let it out in very non-constructive, insensitive ways."

She turned to Damian and apologized. "I never wanted to hurt you, either. We've both expressed ourselves in really hard ways," she said, crying. "But since the show, it's been such an amazing journey with you, to get to know you and see how we integrate with each others' lives. And my friends and family love you." She hugged him, adding, "I'm so happy."

They may not have walked away from the show married, but they still found love. So in that way, the experiment worked.