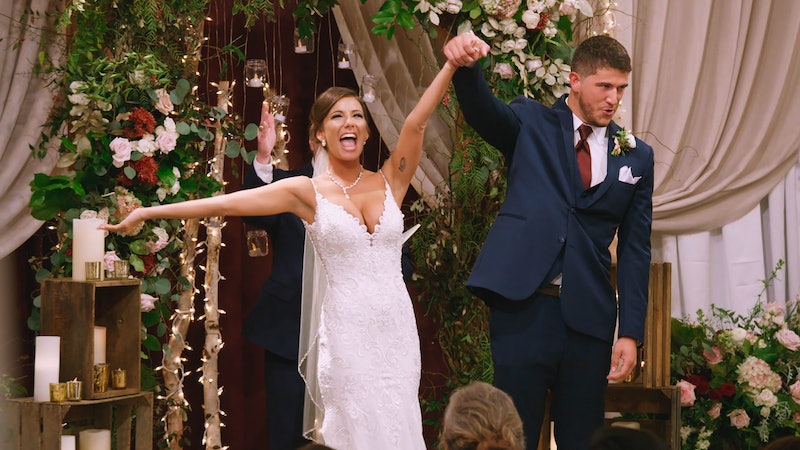 It's been just more than a year since they said "I do," but Love Is Blind's Amber Pike and Matt Barnett are already thinking about a vow renewal ceremony. "I would love to do another wedding," Amber revealed in a People magazine interview published on March 3. "There's no rush on it. We're married now, but at some point." The Georgia native added that she also wants to get to have a bridal shower with her family, as well as a "bachelorette trip with people I actually love and who have partied with me before."

As fans of Netflix's reality dating experiment series now know, Amber and Matt got married in the show's Season 1 finale, which was filmed in Nov. 2018. Their trip to the altar was far from conventional, but Amber doesn't seem to have any regrets otherwise. Looking back on their whirlwind TV journey from truly blind pod dates and engagement to marriage — all within weeks — Amber recalled being on cloud nine during their PDA-filled Mexico trip. "We were unnaturally happy and it was gross," Amber joked to People. "We were gross. We still are pretty gross."

Her wanting to have a second wedding seems to have more to do with how great the first one was than anything. "I couldn’t have asked for a day more full of love and happiness," Amber captioned their wedding photos on Instagram March 2. "I am forever grateful for all of the amazing people in my life that keep my heart so full." In another post, she described feeling as if she was "floating on air" — and not just because they'd changed into comfy Vans to "bust a move" at the reception.

What's also remained the same is their shared love of adventure and new experiences. Over the past year, the Atlanta-based couple has vacationed in Italy, visited Comic-Con, and even their friend groups have now blended, they told People. Matt joked that Amber's guy friends are "in love" with him and a few have even proposed marriage. As for Matt's pals, well, Amber thinks they "might be scared" of her — but she likes it that way.

"My friends joke around a lot," Matt explained to the publication. "One of them challenges my masculinity and Amber's quick to knock him down. Thanks, babe. I didn't need that, but thanks. That friend is frightened of her."

Fans can find out more about what Amber and Matt, as well as the rest of the cast, have been up to when the Nick and Vanessa Lachey-hosted Love Is Blind reunion special hits Netflix's YouTube page on March 5.