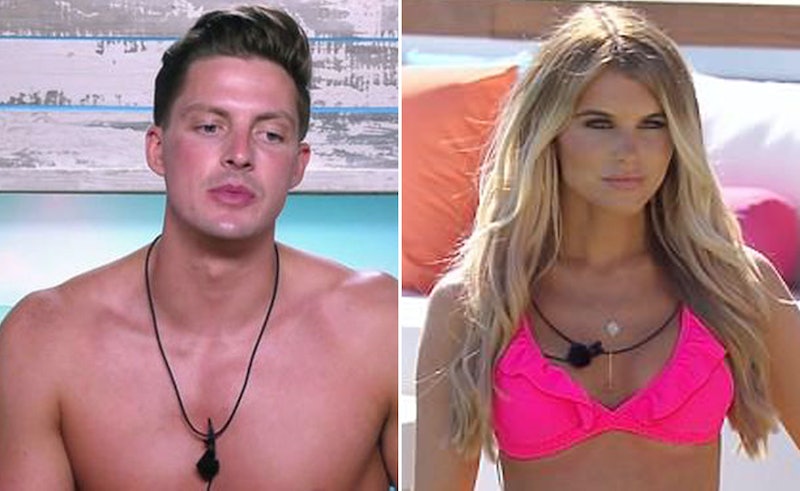 Reality TV reached a new level of awkward on Tuesday night. When Love Island's Hayley Hughes rejected Alex George after he tried to kiss her, it was undeniably quite cringe to watch. Afterwards, a lot of people were feeling sorry for him, and to be honest, I totally get why. But that doesn't mean producers should send in a new girl just to make him feel better. Yes — that's what a lot of people were saying on Twitter.

When that incredibly uncomfortable moment occurred, I scurried over to social media to see what everyone was saying about it, as I often do when drama goes down on screen. And I have to admit I was pretty shocked. There were outpourings of sympathy for Alex as far as the eye could see. OK fine, that I can kind of accept, but what I do have an issue with is the seriously harsh criticisms of Hayley.

Some of the rude messages included seriously misogynistic language. In fact, one tweet which referred to the female islanders as a word I'm not going to repeat earned over 12,000 likes. And it wasn't just social media. The press followed suit with stories about how Alex feels like "a leper" and wants to quit, all because Hayley wouldn't kiss him.

What we might forget with something as lighthearted as Love Island — sun loungers, luxurious surroundings, and scantily-clad bods aside — is that at its core, the show is about relationships. Sure the Islanders might have to play silly games where they shove sausages in each other's swimwear or make smoothies from fruit and each other's saliva, but there's a serious side to it. The producers are aware of it, but it seems the viewers need a reminder. It's called consent.

It's categorically Hayley's choice to kiss or not kiss whoever she wishes in that villa. It doesn't matter whether that's because of Alex's "professional job" or if she didn't like the pattern on his swimming trunks. It's her choice. It shouldn't really have to be reiterated that when she dodged getting intimate with Alex, she wasn't "humiliating" or "embarrassing" him, she was simply exercising her right to not kiss someone she doesn't want to.

That's literally it. Disagree with the manner in which she did it all you want, but ask yourself this, is seeing a woman forced to kiss someone she doesn't want to really your idea of fun weeknight viewing? Seriously, is it?

Personally, I was annoyed when I saw people suggesting Hayley is a hypocrite for kissing Eyal Brooker later in the game. And I'm even more irritated that by appearing on Love Island, a show that yes, features sex between contestants, the singles are expected to get with whichever islander the viewing public wishes them to at any given moment. Previous contestants have confirmed that the show's producers make a point of ensuring they are on board with any intimate activity. So why can't viewers show Hayley the same basic respect? And it's not just a case of consent. The social media reaction to Alex's disappointment at being rejected by Hayley and Samira Mighty also speaks to a worrying precedent of women being expected to take responsibility for men's emotions.

When no one stepped forward for Alex on day one, it was sad. I feel bad for him. But, and it's a big but, this is in no way the fault of the girls in the villa. They don't owe him affection of any kind, and certainly not to spare his feelings. Men aren't entitled to women's time, emotions, bodies, space, phone numbers, shower caps, literally anything. Embroider it on a cushion if you like, hire a plane and write it on the sky if you wish, graffiti it on your ex's front door if you must, but remember it. Women. Don't. Owe. Men. Anything.

I can understand that being in a villa might give your self-esteem a knock, but it's troubling that people in some way make it the girls' fault. Alex is a grown man, and a doctor, who you'd think would have had to deal with more difficult and emotionally distressing situations than a "pieing off" on Love Island. I understand he's down but people should expect him to take responsibility for his own emotions, rather than making it the problem of the female contestants.

Any girl coming onto the island should be doing so with nothing more than the expectation of a summer filled with fun and flirting. She most certainly shouldn't be having to go in there to be met with the task of mopping up Alex's tears and making him feel better.

Calls for a new girl to "fix" Alex's emotions are not on. Newsflash, it's 2018, and I'm calling time on that nonsense. Alex, I hope you figure out a way to make yourself feel better, asap, but don't pin your hopes on somebody else to do it for you.

Moving forward, can the shaming women for not kissing people they aren't attracted to just stop? It ain't cute.

More like this
What Exactly Is The Bish & Chips Show?
By Frances Stewart
Molly-Mae Hague & Tommy Fury Celebrate Pregnancy Reveal In The Sweetest Way
By Sophie McEvoy and Sam Ramsden
Wait, Is Maya Jama Confirmed To Host 'Love Island'?
By Sophie McEvoy
'MAFS UK' Changed The Rules After Matt & Whitney Cheated On Their Partners
By Catharina Cheung
Get The Very Best Of Bustle/UK