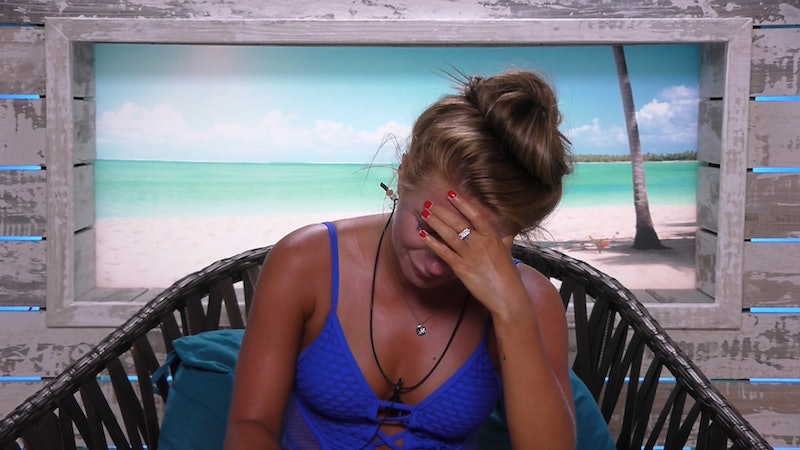 So Ofcom has received 650 odd complaints about Love Island's treatment of Dani Dyer in Sunday's episode. I can't say I'm surprised. After days of Jack Fincham melting hearts by sleeping outside rather than bunking up with any of the new girls at Casa Amor and pining over his girlfriend back at the villa, the producers chose to show Dani a clip of his shock as his ex entered the house, instead of any of his many displays of loyalty and declaration of love

Sunday night wasn't a great evening for Love Island and its treatment of its female contestants. Over on sister show Aftersun, Zara McDermott's reaction to Adam Collard's decision to crack on with new girl Darylle Sargeant was filmed and aired for viewers' entertainment, after which she was subjected to an uncomfortable interview by the show's host Caroline Flack. Despite appearing on the brink of tears for much of it, she chose not to do what Flack, the audience, and those watching at home clearly wanted her to, and condemn Adam's behaviour.

I know some of this is part and parcel of a reality show like Love Island. It's half dating show, half game show, where contestants don't just compete for partners but for a £50,000 prize. A certain amount of toying with the Islanders is fair game, right? But Sunday's episodes of the main show and Aftersun took things to uncomfortable new levels, and viewers appeared to agree. Bustle reached out to ITV2 about the complaints and they declined to comment.

Jack and Dani's situation stood out because by choosing to show that particular clip producers weren't relaying the truth to Dani in a dramatic fashion, but misrepresenting Jack's mindset to heighten the drama. And they got what they wanted, Dani was devastated, she burst into tears, telling the other girls that she knew it was too good to be true and that she didn't understand why she couldn't ever be happy. It appeared to play on bad experiences she'd had in the past and knocked her self-confidence, all for a few seconds of dramatic telly.

The outcry on Twitter and the subsequent complaints proved that for many the show went too far this time. By making women's emotions a spectacle for the viewers' entertainment, the show belittles them. By presenting them as something to be toyed with, it sends out the message that women's feelings are just a game. It's interesting to note that both of the years where Casa Amor has been a part of the show, producers have sent back pictures and video of the boys' behaviour to the girls rather than the other way around. Why manipulate the girls' emotions and not the boys' unless you believe them to be fairer game for manipulation?

As for recording Zara's reaction to Adam's kiss, the show has previously recorded one male contestant doing the same — Tom Powell watched as his partner Sophie Gradon kissed new arrival Katie Salmon. But the problem with the Adam situation is that every girl who has coupled up with him has been dumped from the island days later. In the outside world Adam has attracted criticism from viewers, sparked numerous pieces about his toxic traits, and prompted a warning from domestic violence charity Women's Aid about his potentially abusive behaviour.

But in the world of Love Island, he's still winning. He's still on the show and being given the opportunity to use and discard more and more girls because the public haven't been allowed a decisive opportunity to send him home. What message does that send out? That men should be allowed to behave in toxic and harmful ways as long as it makes good telly? As long as their rejects are putting on the right show for the cameras?

Back in the 19th century women's emotions were used against them to prove their lack of suitability for public life. Where men were calm and rational, women were dramatic and hysterical. Sound familiar? It reminds me a lot of how the men on Love Island have been behaving. Doing underhand things and then acting like the emotion their behaviour has provoked is what's irrational rather than the behaviour itself. Fans of the show have seen it it with Adam, when he passed Rosie over for Zara and then proceeded to deny her experience of his rejection and smile at her tears. It was also on full display in the Wes/Laura/Ellie triangle where he ignored Laura and chatted to Ellie, only to act with surprise when Laura expressed anger and upset over his distance. They'd been acting rationally right, so why were the girls being so hysterical?

So what happens when producers start acting as badly as the contestants? Few people would disagree that in Love Island speak they "mugged Dani off" with their decision to misrepresent Jack's state of mind and manipulate her emotions on Sunday night. It's one thing if the producers allow cruelty amongst contestants, and something that deserves scrutiny in its own right. But when they behave cruelly too, then something has gone seriously wrong.

Love Island used to set itself apart from other reality shows like Big Brother, Geordie Shore or Ex on the Beach, because there was a level of respect for the contestants and the relationships they had developed during their time in the villa. Twists like Casa Amor should exist to test contestant's relationships, but not deliberately attempt to break them when the show's name is after all, Love Island.

I've been tuning into Love Island for the past few years because I usually find it a compelling mix of lighthearted viewing and a useful tool to open up much-needed discussions around straight dating culture. But it seems like in its pursuit of controversy, Love Island has forgotten what made it successful in the first place. According to ITV2, Sunday night's show produced record ratings — 3.2 million viewers — but if the reaction on Twitter is anything to go by, getting contestants to cry isn't what they're looking for when they tune in.