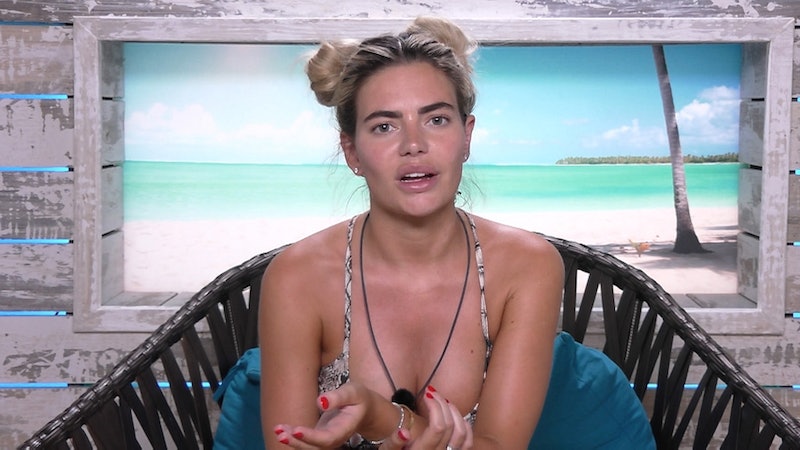 Love Island challenges come in two varieties — the silly and the downright disruptive. Some show the contestants using their mouths as smoothie-makers and the rest stir things up in an entirely different, often more emotional, way. Monday night's was one of the latter variety, with Love Island's sexual partners game giving viewers an interesting look at the pressure women are under when it comes to owning the number of sexual partners they've had.

The challenge began as a guessing game which tested each couple's knowledge of one another. One of the questions was to guess how many people each other had slept with. Eyal guessed Megan's number as 37 and she wasn't impressed. Laura felt the need to add the disclaimer that at 29 she is older than most of the other contestants, which was why her number might be a bit higher.

Yet neither of their partner's guesses nor their actual numbers were higher than several of the boys. But none of them, bar Jack, had any problem revealing theirs. In fact Adam seemed proud to admit he's slept with over 200 women, which I'm not sure quite adds up if he really is 22. Aside from being evidence of the sexual double standard women still face in 2018, where men are praised for sleeping around and women are slut-shamed, it also said a lot about how we perceive women's sexuality.

Megan has admirably stood up for a woman's right to engage in any sort of sexual behaviour she chooses to without being shamed for it in the past. But after the game, she explained that she felt frustrated that her openness about sex had led to Eyal misunderstanding her sexual history.

“I’m not the most innocent of girls, but it doesn’t mean that I’ve gone around and sh***ed everyone I can. I was absolutely fuming. Just because I’m open and I say I enjoy sex, it’s 2018. I’m a woman. I’m allowed to enjoy sex if I want to but it doesn’t mean that I’ve slept with every Tom, Dick, and Harry that walks in a bar. It’s just annoyed me so much. You’d think he would have a bit more respect for me," she said.

There was lots of criticism of Megan on Twitter for her reaction, accusing her of backtracking on her previous points. And while I think you could definitely argue that Megan's attempt to set herself apart from women who have slept with a high number of people isn't tremendously helpful, her behaviour arguably just shows the pressure women are under, with slut-shaming playing an enormous part in how women present themselves sexually.

It all boils down to the idea that if a woman has slept with lots of different people she is somehow of lesser value than a man who does the same. Any kind of open attitude towards sex is equated with "easiness". As stated, there is nothing wrong with sleeping with multiple people, but why do we still consider that to be the only way for women to own their sexuality? Why can't women, as Megan argued, be both sex-positive and not have had that many sexual partners?

I think what it shows is just how much straight women's sexuality is judged in relation to men. It follows that if you only consider a woman's sexuality to be something related to men, that a woman can only really own her sexuality by sleeping with lots of them. I mean it's obviously completely dumb, but as Eyal and Megan's conversation proves it's still a judgement that's alive and kicking in straight dating culture.

We need to stop shaming women for enjoying sex with any number of partners, but we also need to stop equating sexual confidence and or openness with a large number of partners. Because that's just a different flavour of the same old double standard. Women should be able to speak out for women's right to enjoy sex no matter the number of sexual partners they've had and be free from shaming or assumptions about their sexual history when they do it.