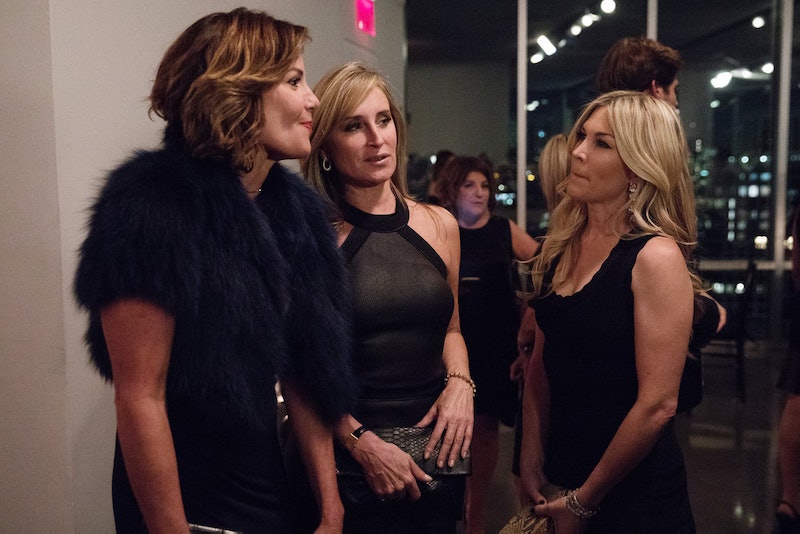 Heidi Gutman/Bravo
By Lindsay Denninger
May 25, 2017

Are you ready to never talk about Luann and Tom and their impending marriage on Real Housewives Of New York ever, ever again? Yeah, the show isn’t (though I am), because we are stretching out this storyline probably until Luann and Tom actually tie the not. On this season’s trip to Dorinda’s Berkshires home (which is home to a ton of Christmas decorations and a ton of fighting), more of Luann’s business was brought up. Dorinda asked Luann about her marriage on Real Housewives Of New York, and Luann assured her that she had no second thoughts about getting hitched.

Last season, Bethenny got intel from a friend that Tom was allegedly making out with another woman (not Luann obviously) in a bar. There were alleged pictures, and it was a whole thing. (Tom has never flat-out denied these claims — he said on the show that he didn’t remember, and then he said to Luann on the phone, “It’ll never happen again.” He and Luann did an interview with People soon afterward in which Tom said, “If I could take it back, I would. I deeply regret the mistakes I've made, and most of all hate the way it hurt Luann.")

Bethenny was the one who told Luann about it, and basically, Luann shot the messenger. Ever since then, Bethenny has stayed out of it (smart), but Ramona has not, and she is trying her best to dig up information on Tom. That’s what Ramona does — causes trouble. But this year, after Ramona claims to Dorinda that there is more to the Tom story, Dorinda does the responsible adult thing and shuts Ramona down, and then she goes to Luann and asks, calmly and politely, if she trusts her man and still wants to marry him. Luann says yes, and that’s all! That’s the end of the conversation. Dorinda can only take Luann at face value, and frankly, everyone is sick of talking about Tom. Everyone except Ramona, who is always like a dog with a bone.

Luann and Tom got married in real life on New Year’s Eve 2016, so this story, as far as I’m concerned, is dead. Let Luann and Tom live their lives, because their relationship is their business and no one else’s. Let’s move on to full-out insulting each other’s homes, like the Housewives do on Real Housewives Of Atlanta, or maybe talking about the other’s mob ties like on Real Housewives Of New Jersey. Anything — and I do mean anything — but Tom and Luann.