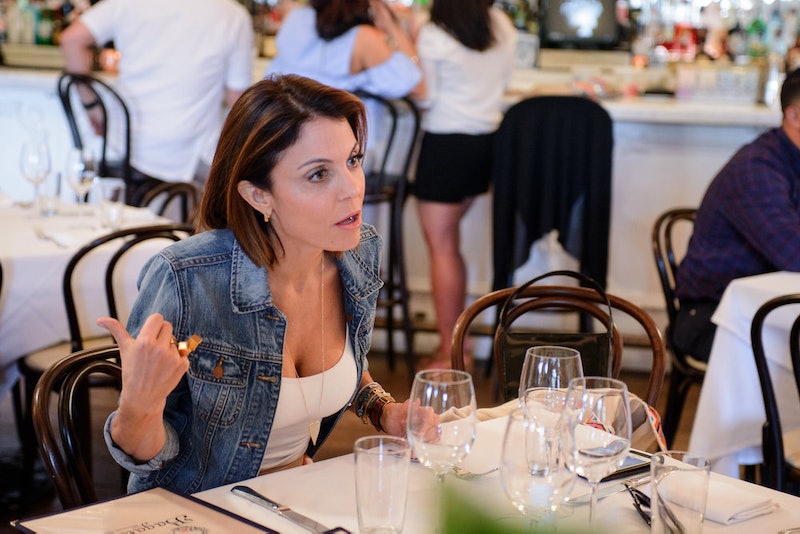 As a longtime Real Housewives Of New York City fan, I want the best for the women on the show. I feel like, in a way, I’ve grown up alongside them. Engagements, marriages, children, divorces, second homes, empty nests — they’ve all happened over the course of the show. I really want Luann de Lesseps to be happy, but there’s something about her engagement to Tom D’Agostino that rubs many fans, and the other women on the show, the wrong way. To add further fuel to the fire, Bethenny Frankel alleged that Tom cheated on Luann during Wednesday's Real Housewives Of New York City episode. Bustle reached out to Bravo for comment from Tom about the claims, but has not yet received a response.

Here’s the gist — a good friend of Bethenny’s (whom Bethenny trusts because she doesn’t have a dog in this fight) texted Bethenny to tell her that a night or two before Luann and Tom’s engagement party, this friend allegedly saw Tom making out with a Playmate or Playboy bunny or similar at the Regency Hotel in New York City, in plain view of everyone. Bethenny clearly didn’t know what to do with the allegations, and she gently prodded Luann about whether or not she could trust Tom, to which Luann responded an unequivocal yes. "I know him, I know Tom," Luann said. "He's my soulmate." Bethenny then told Ramona and Carole what she had heard. Then they all kind of decided Bethenny would tell Luann.

The episode ended before tea was spilled, but the previews show a very upset Luann telling Bethenny, “Don’t do this to me, don’t tell me this," so I imagine that Bethenny told her and that it was really hard for Luann to hear. I hope that if and when Bethenny breaks the news to Luann about what she’s heard, she does it in a way that’s kind and respectful of the delicate situation.