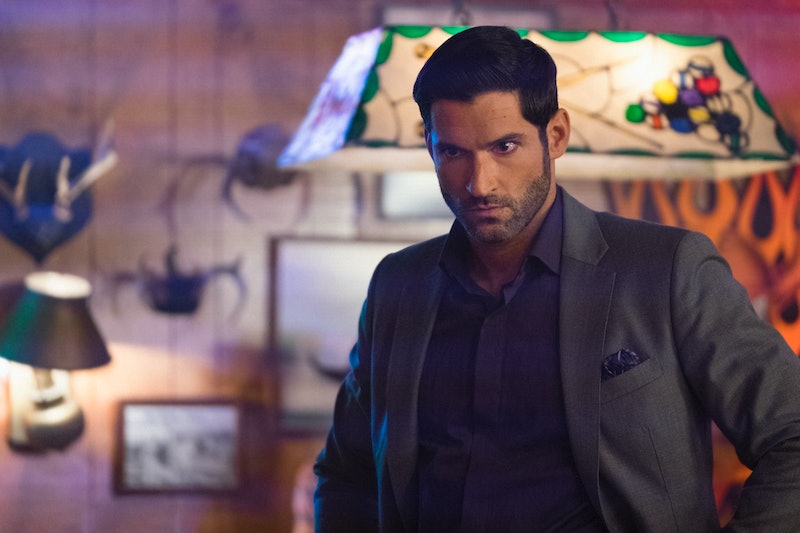 Just when you think the Arrowverse crossover couldn't get more epic, Lucifer appeared briefly in "Crisis on Infinite Earths" and proved to just as devilishly charming as ever. Typically, you wouldn't expect to see our beloved CW superheroes hang out with the angel of the underworld, but desperate times call for desperate measures and saving Oliver's soul from purgatory certainly falls under that category. Naturally, getting access to such a place can be a difficult undertaking, which is where Lucifer's expertise came in.

Constantine knew just where he, Diggle, and Mia could find his dark and dangerous frenemy on Earth-666, because, of course. After exchanging a few insults (as one does with any fallen angel), Lucifer was happy to oblige. He gave Constantine a card with the devil on it (naturally) and told him that they had until the entire image on the card fades to get Oliver's soul and get out of purgatory. If they stayed any longer, they would be stuck there for all eternity.

And just like that, they set off on their mission, leaving Lucifer to return to whatever nighttime activities he was up to before their arrival. But even though his cameo was brief, it was enough to send the internet into overdrive.

It's understandable that fans would be surprised to see Tom Ellis' Lucifer show up in the Arrowverse crossover, not only because he's never been apart of these big events before, but also because the actor himself denied rumors that he would be appearing in "Crisis" back in October to Entertainment Tonight, even referring to the idea as a "hard pass." He added, "Right, OK, see... this is what happens. I go to Vancouver for the weekend to visit my friend for his birthday and now suddenly, I'm in a different show!"

Obviously, that was all a lie, but what should we expect from the devil himself? Regardless, it was an epic moment and truly proved that this is the biggest crossover event by far. Perhaps this means that, once the dust settles and our heroes (hopefully) save the day, Lucifer could pop up again on one of these shows for a little sinful good fun.

Given all of the deaths that took place at the hand of the Anti-Monitor's anti-matter, fans were in desperate need for a few more light-hearted moments to help break up all the sadness. (If Iris dies for real, we riot!) Luckily, Lucifer was more than up to the task and successfully took our minds off the multi-verse drama, at least temporarily. And if this results in a Constantine and Lucifer spinoff series, then so be it.