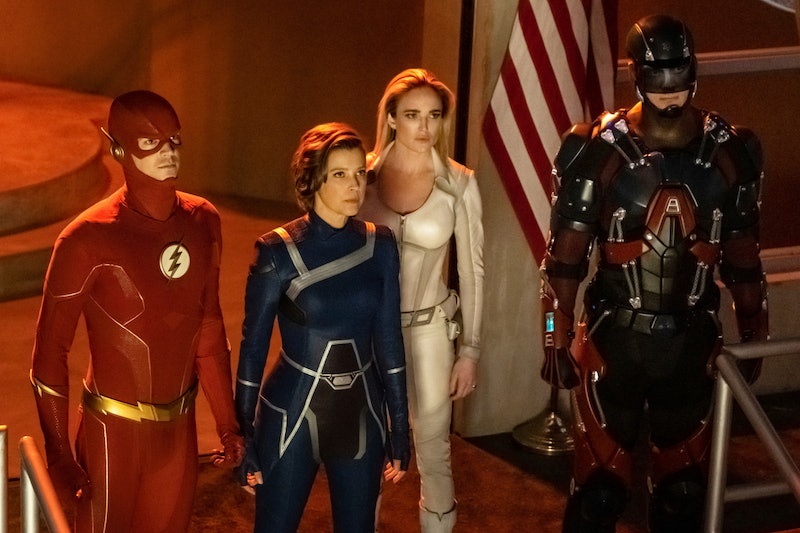 Since this year's Arrowverse crossover, Crisis on Infinite Earths, was announced last December, there have been no shortage of questions about which heroes will die. It's based on the 1985-1986 comic miniseries of the same name, in which more than a few masked vigilantes meet their demise — including Oliver Queen (aka the Green Arrow), who sacrificed himself in night one of the crossover. The remaining four episodes — concluding with Part 3 on Dec. 10 then picking up Jan. 14 with back-to-back episodes of Arrow and Legends of Tomorrow — will bring all of the Arrowverse characters together in order to save the entire multiverse. But with so much at stake, it seems unlikely Oliver will be the only one who doesn't make it out alive. Here's who's most in jeopardy.

Technically, Oliver is already dead, but some fans aren't convinced this is the end for him. A number of Twitter users have begun speculating Oliver will come back in some way, then end up dying twice during the crossover — which isn't implausible, considering the Arrow portion of the crossover is still to come.

All season long, the Monitor has warned Barry that the Flash has to die in order for the rest of the world to survive this crisis. And while this certainly isn't the first time the Flash's life has been in danger, showrunner Eric Wallace confirmed that he won't survive. "We know that on Dec. 10, 2019, the Flash will die…We're not messing around," he told CBR.

In the comics, Barry is forced to run faster than ever before in order to counteract the Anti-Monitor's antimatter. This results in Barry getting swallowed up by the Speed Force, which allows for Wally West to come in and take over as the new DC speedster. But given that The Flash series would have a tough time going on without its central character, perhaps the writers will take a few creative liberties with this storyline.

In the comics, Supergirl dies by the Anti-Monitor's hands in a brave attempt to save her cousin, Superman. However, as in The Flash's case, it would be difficult for Supergirl to go on without, well, Supergirl. With so many extra Supermans running around — including Smallville alum Tom Welling — it's possible a Man of Steel will take the fall instead.

In September, TVLine reported that Ashley Scott will portray Helena Kyle, aka Huntress, in the Arrowverse crossover. The character is from the DC Comics drama Birds of Prey and is the daughter of Batman and Catwoman. She's even shown up on Arrow, though her name during that iteration was Helena Bertinelli and she was played by Jessica De Gouw. In the comics, Earth-2's Helena was killed while attempting to rescue children from shadow demons, which were created by the Anti-Monitor. It's possible that version of her fate will play out in a similar fashion during the crossover.

It's unlikely that all of these heroes will be killed off as a result of Crisis, but if the source material is any indication, several core characters could wind up dead.