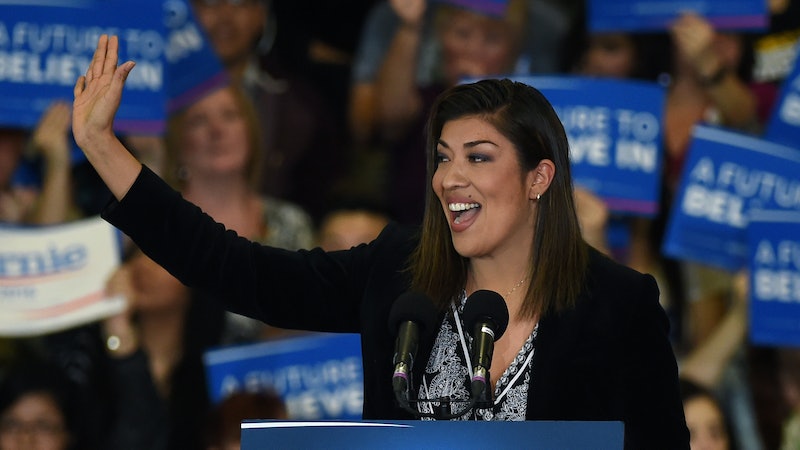 Lucy Flores is a former Nevada State Assemblywoman, former candidate for Congress, lawyer, and media entrepreneur. In 2010, Flores, along with three colleagues, became the first Latinas elected to the Nevada legislature in the history of the state.

Whether it’s business, politics, media, or law, the number of Latinas present across professions is dismally low. The good news is that we are making gains faster than any demographic of women of color in critically important areas like business ownership and college graduation rates. The bad news is that this often means we are entering spaces as “the first, “the only,” or “one of the few.”

I know a lot about those descriptors that often turn into titles. In 2007, I became the first in my family to graduate from college. In 2010, I became the first law graduate. When I was elected to the state legislature of Nevada that same year, I became the first Latina ever elected to the state legislature in the history of Nevada. I had the great fortune of sharing that title with three other Latinas who were also elected. In 2014, I was the first Latina Democratic nominee for lieutenant governor of Nevada. In 2016, I was the first Latina congressional candidate for Nevada Congressional District 4 in Las Vegas. And most recently, as founder of the digital media startup Luz Collective, I joined the miserably exclusive club of the 0.04% of Latina founders who raise venture capital funding.

And while I celebrate these gains, I’m always quick to remind people that we should also recognize these achievements in full context. Latinx people — whether from Mexico before these lands were colonized by white-Anglo men, from our indigenous communities that produced “mestizos” as a result of Spanish colonization, or from Latin-American migration — have been here, some for hundreds of years, and contributed to the growth and success of this country. But the fact that in 2019, we are still seeing so many “firsts” is a stark reminder not only of just how much work we have left to do to achieve proportional representation and success, but also that those of us who are moving forward are doing so mostly alone.

As the “first,” I had accepted a burden I didn’t ask to bear.

On a few occasions, though, such as my election to the Nevada Legislature, I thanked my lucky stars that I didn’t have to enter that historically white and male institution by myself. I was comforted knowing I wasn’t alone in my experiences and that I had three Latina colleagues to turn to and commiserate with. We laughed when the mostly white lobbyists and senior staff mixed up our names, and even years later, still couldn’t get it right. After our reelections to second terms, my Latina colleague had a baby, and I was often congratulated for the birth of her child. Our names were often wrong when programmed into video feeds of our testimony because the staff couldn’t manage to get it right. We laughed, and started calling all the white men “Bob” on purpose. What else could we do but laugh and shrug it off?

Then there were the more serious aggressions and insults. There were jokes about cleaning staff made at our expense. I was once told that I should clean houses as a side hustle. I was described as “fiery,” “loud,” and “hot tempered.” And when I wanted to show everyone what fiery actually looked like by flipping over tables or cussing someone out, I didn’t, because I knew that whatever stereotype I confirmed for them would be the stereotype I confirmed for my entire community. As the “first,” I had accepted a burden I didn’t ask to bear. I knew that it was up to me to be the best representative of not only the district I was elected to represent, but also the best representative of Latinas everywhere.

It wasn’t an easy existence. I often reminded my staff that I was hard on myself and hard on them because we didn’t have the privilege of making mistakes. Latinas and women of color aren’t allowed to make mistakes. And if we did, not only would we pay a heavy price, but so would the entire Latinx community. So we tried to be as perfect as we could be and a decade later this remains the case for so many trailblazing Latinas.

We are showing up as our full selves, unashamed of our Latinidad.

But over the years, we have grown stronger. We have become more influential. We have become more grounded in our identities, our cultures, and our voices. The need to aspire to this unreasonable level of perfection that our white counterparts often never have to worry about is becoming less and less burdensome. We are showing up as our full selves, unashamed of our Latinidad. We are learning to advocate for ourselves and pushing back when we’re judged by a double-standard. We are building community and finding strength in numbers to finally say enough with the bullshit.

This progress is a direct result of the sacrifice of millions of Latinas bravely moving forward by themselves or with only a few hermanas at their side. It’s a result of biting your tongue when you didn’t really want to, and letting loose when you finally could. It’s a result of Latinas figuring out the ropes, then teaching others how to navigate the minefield. The result is us finally recognizing that there are 29 million Latinas in this country whose ancestors did battle so that we could arrive with an eye toward the future.

But most importantly, we recognize that we are the present, and we’re not going anywhere because this is our country as much as it is anyone else’s.

So to all my Latinas who paved the way, and to all my Latinas who are paving the way every single day with your unique and powerful contributions, I see you. I honor you. And I thank you. Continue to stand tall in your truth, rooted in your cause, and guided by your north star. Your hermanas are with you.

Bustle’s Míranos package highlights the extraordinary people of the Latinx community, letting the world truly “see us” at a time when it matters most.