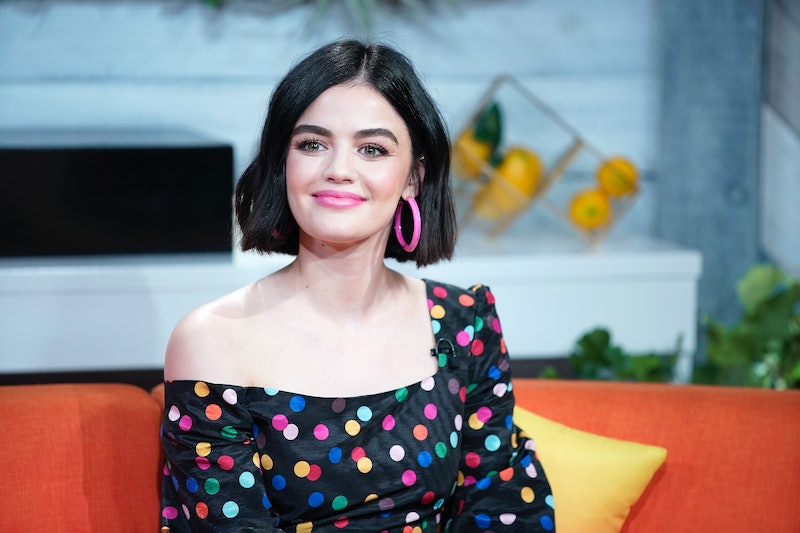 Nearly three years after fans said goodbye to the town of Rosewood, the Liars are ready to reunite once more — and it might not be the last time. During a recent interview with Entertainment Tonight, star Lucy Hale said she'd consider making a Pretty Little Liars movie one day, while explaining how to watch the Pretty Little Liars reunion on May 15. The cast — including Hale, Troian Bellisario, Shay Mitchell, Ashley Benson, Janel Parrish, and Sasha Pieterse — and creator I. Marlene King are taking part in the virtual reunion and Q&A session to benefit Feeding America, and it's as close to a reboot as fans are going to get — at least, for now.

"All of us are gonna be there I believe," Hale said, adding that she's excited to see her former costars again. "We won't physically be in the same place, but since we wrapped, I haven't seen a lot of their faces. A lot has happened, and there's babies, and marriages, and I just can't wait to catch up. ... I'm looking forward to it."

Besides, as Hale added, thanks to the current stay-at-home regulations due to the coronavirus pandemic, the cast has "no excuse not to" get together once more. "It'll just be good to connect with people," Hale explained, adding that she's not just looking forward to chatting with her former co-workers, but also "[with] all the fans that are calling in."

Once the pandemic is over, Hale said, she might be interested in potentially reuniting with her Pretty Little Liars costars once more, this time on a movie set. "We're in a quarantine that we thought would last a couple weeks. Anything is possible at this point," she told ET about a potential Pretty Little Liars movie. "I don't rule anything out."

Unfortunately, even with Hale potentially on board, fans will likely have to wait quite a while before a Pretty Little Liars movie potentially comes to fruition. "I feel like we'd need a little more time to pass," Hale explained. "I feel like we would get more out of it if we were, like, 10 years down the road."

Hale isn't the only cast member who would be interested in seeing the Liars on the big screen. Back in April 2017, Troian Bellisario revealed the entire group of leading ladies would be interested in making a PLL movie. "We love working together, and I think any opportunity to be together we would take," she told The Hollywood Reporter, "but it very much depends on the circumstances of the story."

In the meantime, fans will have to settle for watching the cast get back together on their computer screens, all for a good cause.