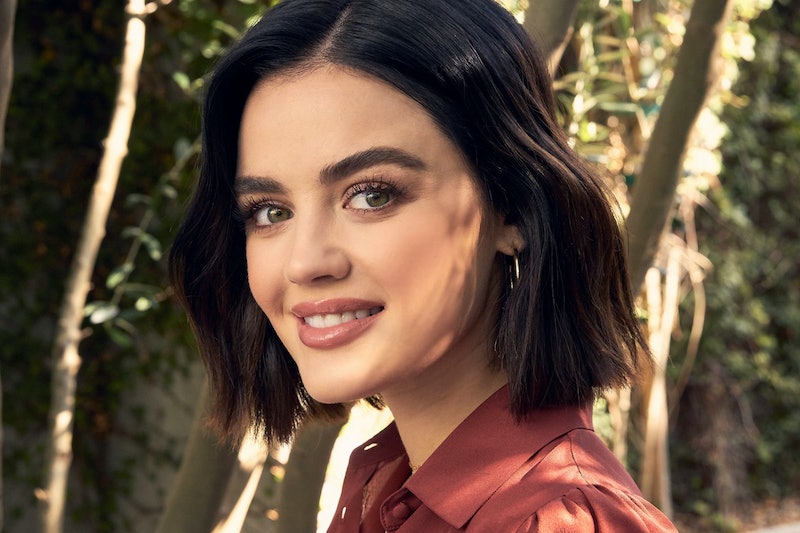 Before actor Lucy Hale reached her teenage years, she already knew about the world of birth control, she tells Bustle. Since the Pretty Little Liars star’s mom worked as a labor and delivery nurse, Hale could candidly ask about the facts and benefits of different birth control options. Many people, however, don’t feel comfortable openly discussing their reproductive health with friends, family members, or health care professionals.

“It’s scary to ask these questions,” Hale tells Bustle, adding, “It can be a little embarrassing.”

Hale has now partnered with pharmaceutical company Bayer to raise awareness about intrauterine devices (IUDs) through the #WhyIUD campaign, which provides information from an OB/GYN about the potential risks and benefits of Kyleena and other types of IUDs. The campaign focuses heavily on Hale, who's been using an IUD for around a year, sharing her journey to ultimately make the switch from the birth control pill to the Kyleena device.

Hale tells Bustle she's tried multiple forms of the birth control pill throughout her years of experiencing monthly periods. But last year, she decided it was time for a change. “For me, remembering to take the pill was becoming a chore in itself,” she says. With her schedule getting in the way of consistently taking the pill, Hale consulted her doctor about different options. She explained she wasn't ready to get pregnant in the near future, and she wanted to be able to focus on her career without having to think about taking her daily pill. Under the recommendation of her doctor, Hale ultimately settled on the Kyleena IUD, which is a T-shaped piece of plastic inserted in the uterus that delivers hormones to prevent conception.

But Hale says she had apprehensions about the device before her OB/GYN inserted it. “The biggest concern ... I had was, 'Is it painful? Can you feel it? Would it make my periods lighter'?” Hale says. She also worried about the procedure itself, assuming it would be a long, painful process. While every person's experience with the device is different, Hale says her procedure was quick and easy. She's now been on the most effective form of birth control (besides abstinence) for over a year.

Dr. Yesmean Wahdan, Medical Director at Bayer and an OB/GYN, tells Bustle that Hale’s frustrations with the pill and hesitations about getting an IUD are common to many people with uteruses who explore different birth control routes. For all of us who take the pill, we can probably think of many times when we forgot to throw the pack in our purse before going out, or forgot to take it at the same time every day. Many people experiencing this frustration don’t even know about the IUD option. In Bayer’s Millennial Women’s Health survey, which asked 1,000 women between the ages of 18 and 35 about their knowledge of IUDs and other forms of birth control, only 28% of respondents had sought out information about IUDs. “That helped me understand that [people] needed information about options that would cover them for a longer period of time,” Wahdan says.

The IUD comes in two forms — copper and hormonal. Copper IUDs don't contain hormones, instead relying on sperm cells' aversion to copper to prevent pregnancy for up to 12 years. Hormonal IUDs, such as Kyleena, thicken the mucus in the cervix to block and trap sperm, and they sometimes stop ovulation. Depending on the brand, a hormonal IUD lasts from three to seven years. "An IUD was at the top of [my] list," Hale says referring to her decision to switch to Kyleena. "It's very low in hormones, which was really important to me. It's small, I can't feel it ... It sort of was a no-brainer for me."

By participating in this campaign and sharing medically accurate information about IUDs, Hale hopes to challenge stigma surrounding the discussion of birth control. “I’m opening this door for young women to even start the conversation because that’s really what we want to do is ... make sure that this correct information is out there,” Hale says.

The first step in choosing a birth control method is finding the courage to ask questions and figure out the route that makes the most sense for your body and lifestyle. Through sharing her story, Hale wants to give people that extra push to talk to their doctor. “The one thing we have is our body,” Hale says. “And I think educating ourselves on our options is the most important thing you can do.”