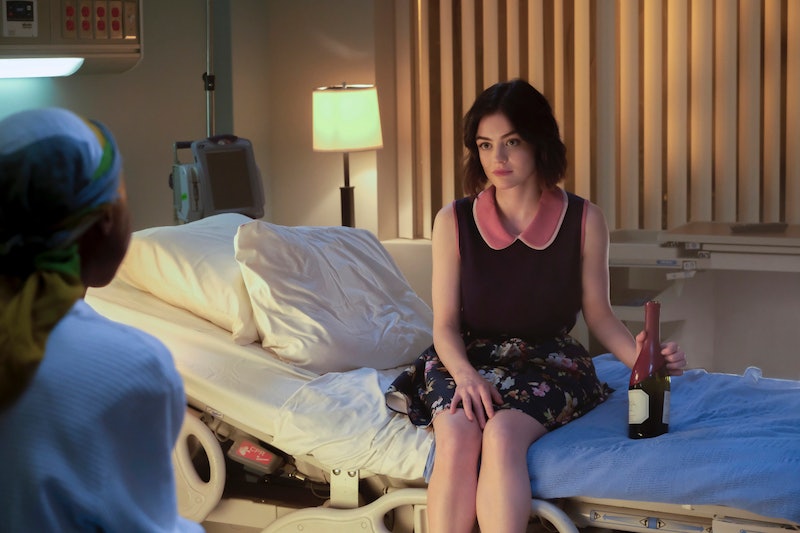 After seven years of starring on Pretty Little Liars, you'd think that Lucy Hale would take a break before diving into her next project. But instead of taking a well deserved vacation or trying her hand at movies or a different kind of project, she jumped from one TV series to the next. And while Hale's new CW drama Life Sentence certainly has a title that makes it sound like a big commitment, it was one Hale was more than happy to make.

"I have to say, it was very weird," she tells Bustle along with a small group of reporters on the Vancouver-based set of Life Sentence on an early November morning. "I jumped into something pretty quickly after Pretty Little Liars, which initially I didn't [want]. That was not really expected."

In the end, it was the story that hooked her and made her throw caution to the wind. Life Sentence (premiering tonight at 9 p.m. on The CW) is about Stella (Hale), a girl who has spent the last eight years living like she was dying ... because she literally was. With a cancer diagnosis that gave her only six to eight months to live, she lived every day like it was her last. She traveled the world, constantly tried new things, and fell in love on a whirlwind trip to Paris. But when Stella finds out that her cancer has been cured, she is suddenly forced to face the long-term consequences of all the decisions she made while living in the moment, including marrying a total stranger.

And if that weren't enough, she also finds out that her perfect family isn’t so perfect after all — they've just been hiding all their issues from her because she was dying. But now that she’s well, all bets are off, and Stella has to learn for the first time how to live like she has the rest of her life ahead of her.

"I read this script and I fell in love with Stella because she is just someone that we could all be a little more like," Hale says. "She looks at the glass half-full and she's optimistic and she thinks that everything will work out. She is a pretty positive person. I admire her in a lot of ways."

It also helped that Stella has a sense of humor. "That's one thing that I haven't really played around with with acting," Hale says sitting outside Stella's family's house set on an indoor stage. "I've never gotten to do a comedy. I thought the writing was really witty, and she talks a lot so this has been a challenge for me. She talks in monologues. She just talks so much."

Stella is a stark contrast to Aria Montgomery, Hale's character on Pretty Little Liars, who she played for the better part of a decade. And that's because "tonally it's just completely different from Liars or anything else I've done," Hale says. "It's been nice to change it up. It's exciting. I hope that everyone likes her as much as I do."

The whole "cancer drama" storyline has been done so many times before on TV shows and in films, but Life Sentence is taking everything you think you know about cancer stories and flipping it on its head. This isn't a show about coming to terms with a devastating diagnosis or learning how to say goodbye to loved ones and life. It's about what happens when a miracle occurs and someone actually beats cancer ... and then life falls apart. That angle is such a fresh take on a genre full of tropes, and that's what attracted Hale in the first place.

"When I had gotten approached with this idea, I met with [showrunners] Erin [Cardillo] and Rich [Keith] who wrote the pilot, and they had said, 'Wouldn't it be interesting if the girl who was supposed to die ended up living, and she has to live with all these decisions and choices she made while she was dying?'" Hale says. "I loved it. It's something that I had never seen or heard before."

With someone as impulsive as Stella (this is a girl who married the hot British guy she met in Paris after only knowing him for three days), she's going to have a lot to answer for now that her actions actually have consequences.

"Who knows what else she's gotten herself into?" Hale says with a laugh. "We find out she's going to live, which is great news. But to realize that she has no idea who she is and who her family really is, because they've been protecting her in this little bubble from the reality of their problems and the reality of the world, when she finds out she's going to live it's a bittersweet moment. Because then at the same time, she realizes how insanely dysfunctional her family is."

After Stella's family learns they don't have to protect her in a positive bubble, they start to unload all the ugly truths about their lives, to Stella's complete shock. Her parents, Peter (Dylan Walsh) and Ida (Gillian Vigman), have fallen out of love, partly because Peter spent their retirement helping Stella make the most of her final days, and partly because Ida has fallen in love with her best friend, Stella’s godmother, Poppy.

Stella's sister Elizabeth (Brooke Lyons), gave up her own dreams to take care of Stella and start a family with her husband Diego (Carlos PenaVega), just to give her parents something positive to focus on. And Stella’s brother Aiden (Jayson Blair), is pushing 30, still lives above the garage, sells Adderall to soccer moms, and uses Stella’s cancer to guilt them into sleeping with him. Everything is a mess, and Stella had no idea.

"The show is so [relatable] because these characters aren't perfect and they do mess up," Hale says. "You find out in the pilot that this whole time her parents' marriage has been not ideal, her mom is bisexual, her brother's dealing drugs and is just a hot mess. But that's what's so great: people aren't perfect and we're not shying away from that. It's dealt with in a really funny way, because I think there's nothing more relatable than dysfunction."

So while there's certainly a lot less murder in Hale's new series than there was on Pretty Little Liars, there is no shortage of juicy, life-changing drama. Let's just hope she stays away from anyone wearing a black hoodie.

More like this
10 Famous People You Forgot Guest-Starred In The Original 'PLL'
By Brad Witter
Watch The Trailer For Netflix’s Edgy New Comedy 'FAKES'
By Brad Witter
Does 'Locke & Key’s Ending Mean There Could Be A Season 4?
By Sophia Moore
Everything To Know About 'Loot' Season 2
By Kadin Burnett
Get Even More From Bustle — Sign Up For The Newsletter