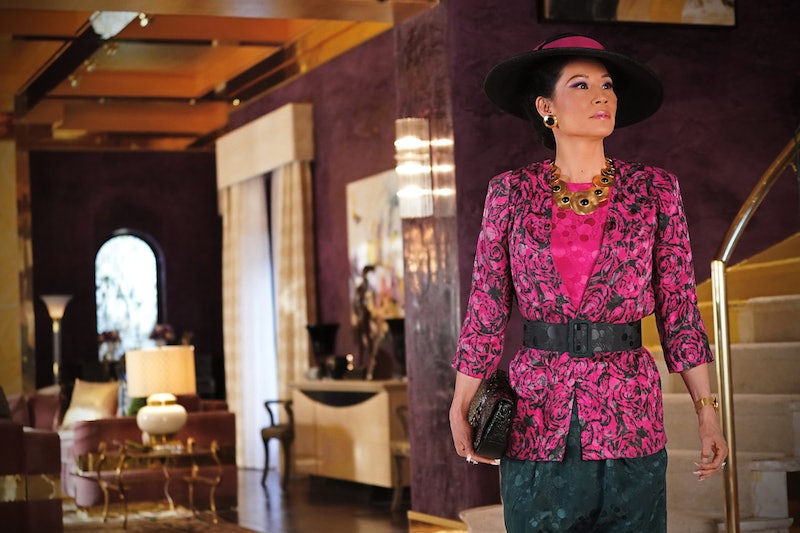 If watching three women enact revenge on their cheating husbands sounds up your alley, you're probably going to like CBS All Access' Why Women Kill. The dark comedy, premiering Aug. 15, follows three women living in different decades, each grappling with infidelity in their marriages and inching closer and closer to murder — because revenge is best served deadly, right? Lucy Liu's character, Simone, is an '80s socialite who lives a glamorous life filled with shopping sprees, extravagant parties, and maintaining the illusion of a perfect marriage with her husband Karl. Her flashy wardrobe, smug humor, and journey from being a trophy wife to a killer will make her fun to watch. And according to Liu herself, she got the best decade to inhabit.

"The '80s is the best decade," Liu told Entertainment Tonight. "I think the '80s was a great time of experimentation." She didn't tease much else about her character, but did say the story will be juicy, which seems like an understatement based on the Why Women Kill trailer. In it, Karl sits in their posh living room wearing an expensive suit. Simone rushes by him in a Pretty Woman-worthy outfit complete with a hat and flashy jewelry, coyly promises that she will not be late for their party at 7, then leaves.

Back at home later, Simone is shocked to find a photo booth strip filled with pictures of Karl and another man kissing. She confronts him, asking if there have been "others," but it seems like they're not able to finish their argument before returning to their awaiting guests — including the man from the photo. Afterward, Karl threatens to come out publicly if Simone leaves him, so she chooses to stay in her marriage and start her own steamy affair with a younger man. When a couple remarks on their perfect relationship, Karl and Simone shrug it off with passive aggressive comments and fake smiles.

However, a Why Women Kill teaser reveals they won't keep up the facade for long. In the clip, "Tainted Love" plays as the camera pans over a table of half-eaten appetizers, a spilled martini glass, and a dead body (presumably Karl) with a gunshot wound lying underneath it. A pair of hands (presumably Simone's) picks up a couple of items, including a gun, and walks off with out her face being seen. So, it looks like one of the couple's epic parties is going to end with murder.

There's always a chance that Simone could have killed Karl’s lover instead, but it makes more sense for her husband to be the victim, since he's the one who betrayed her. Either way, it's an intriguing first look that will undoubtedly leave fans eager for more.

Yes, it may be a bit jarring to see Lucy Liu go from solving crimes on Elementary to committing one on Why Women Kill, but it's worth tuning in for the drama, sex, rage, and opulence that's sure to come as Simone navigates this new, dark path.

More like this
What Working At Marvel Is Really Like, According To A 'Ms. Marvel' Co-Creator
By Gretchen Smail
Natalia Dyer Opened Up About Steve & Nancy’s “Lovely” ‘Stranger Things’ 4 Dynamic
By Grace Wehniainen
Lizzo Proved She’s Team Jeremiah During Her ‘The Summer I Turned Pretty’ Review
By Grace Wehniainen
What’s New On Netflix: Lana Condor’s Ghostly Comedy & A Sexy Reality Series
By Arya Roshanian
Get Even More From Bustle — Sign Up For The Newsletter