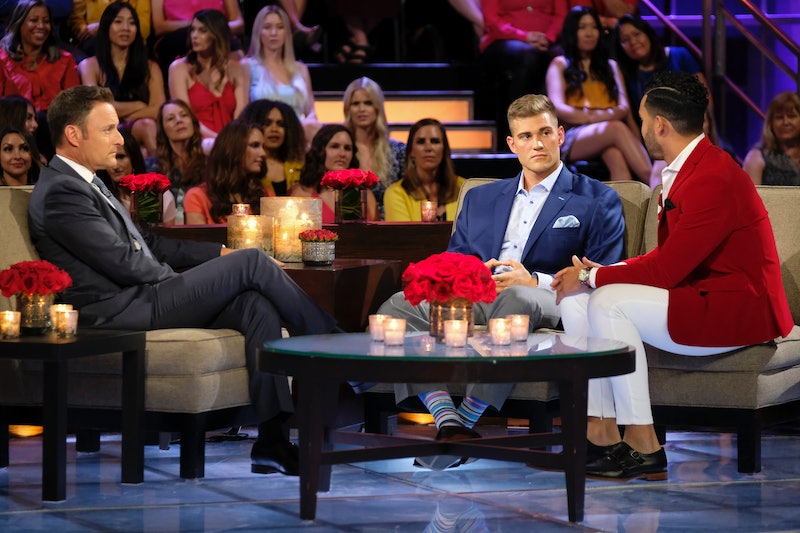 The Luke P. Show should be officially over now. On The Bachelorette: Men Tell All episode, which aired on July 23, Luke was finally sent home for good. But of course, in true Luke P. fashion, he didn't go quietly. Taking issue with how he was portrayed on the episode, Luke P. claimed proposing to Hannah on The Bachelorette wasn't ever his plan, and he accused both ABC's editing of his story and the producers for sort of staging the whole ring aspect. Bustle reached out to The Bachelorette for comment.

Around the time the show was airing, Luke P. got on his Instagram and shared some "truth bombs" on his Instagram Story. For one, he suggested that the ring fans saw him carry to the rose ceremony he wasn't invited to was actually given by the producers, and that it wasn't his idea. "I was not ready to propose the producers gave me that ring to show Hannah how serious I was, I had zero intention of proposing," he wrote. That begs the question, though: what did Luke think was going to happen when he presented the ring? If he was serious enough to show her the engagement ring, then surely he must have thought about proposing, right?

He then posted a screenshot of some comments from an Instagram post (though it's unclear which one) in which a user said they were at the Men Tell All taping, which took place July 12, and claimed that it "sure is a different world. Editing will make anyone look bad." Then another person commented that their friend was also in attendance and claimed that all the men "bashed" Luke P. for "hours." The added, "It hurts me to see such a genuine human being made into such a villain for ratings." Luke P. liked both those comments and then responded, "That about sums it up right there," suggesting that he felt he was a victim of the editors.

Luke went into more detail in a separate Instagram post shared on Monday. In this post, he claimed that, during his hometown date, Hannah had told him that that she "wasn't going to use the fantasy suites for sex but for conversation, no matter how @abcnetwork made it look," something he also brought up during the Men Tell All. Speaking on the Men Tell All, Hannah denied ever saying she wouldn't have sex in the fantasy suites.

A few of his fellow Bachelorette contestants like Connor S. and Tyler C. pushed back on Luke P.'s claims that the producers made him do things he didn't want to do. In a post later retweeted by Tyler, Connor wrote on Twitter that "nobody was 'manipulated' by producers," a clear dig at Luke P.

Regardless of Luke's claims, the contradictions and lies that Luke P. said during his time on the show were too explicit to engineer. Just last week, fans watched as Luke told Hannah he'd remove himself from the show if she'd had sex with any of the other guys, only to backtrack and insist he didn't say that. Sure, things can seem more tense because of editing, and, yes, editing can make people be perceived as the show's villain when they weren't. However, the things viewers have heard Luke say to Hannah and the other guys were not post-production flukes. And, though he tries, he can't deny what he said on national television.