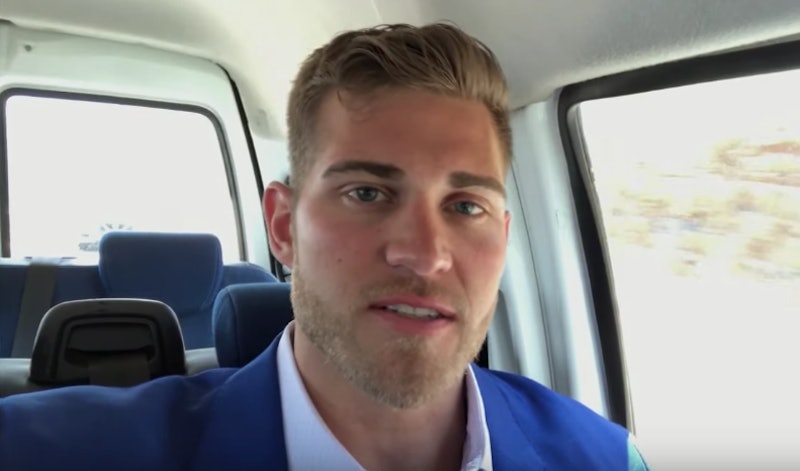 Luke P. just can't quit The Bachelorette. According to a new promo for the rest of the season, Hannah's very stern declaration that she knows he isn't her future husband means basically nothing to him, and he'll be back to stir up drama once again. In fact, fans even think that when he returns, Luke P. proposes to Hannah, based on that preview we saw weeks ago of Chris Harrison telling her one of the men showed up unexpectedly with a ring.

There are a couple of reasons to believe Luke is the one who pops the question. Firstly, he's the only one out of himself, Tyler, Jed and Peter who seems inclined to take the bull by the horns in such a dramatic fashion, even it if means totally throwing off the timeline for how the show is expected to go.

And aside from that, there seems to be solid proof that the proposal has something to do with Luke. Hannah is wearing the same outfit and hairstyle in the ring teaser as she is in the trailer that reveals Luke's return, making it seem like both were filmed on the same day. Jed, Tyler, and Peter are all still safe and in the running for that final rose...so who else could it be but Luke?

If you somehow missed it (or blocked it from your memory), Hannah sent Luke home last week after he told her he'd want to end their relationship if she'd had sex with any of the other remaining men. She was incredulous that he'd judge her when she's made exceptions for him time and time again, and that he'd even try to claim ownership over her choices in the first place. As she said plainly, she does not owe him anything.

But still, it will not be surprising in the least if Luke shows up to propose — this pattern of behavior has been apparent throughout the season. Luke has literally had full conversations with Hannah about her concerns about him, and come away from them saying he doesn't know what she means and he's just going to continue on without changing. He's presumed to know what she wants, even when she explicitly states the opposite. Plus, he already talked himself out of being sent home once, then repeatedly refused to leave when Hannah asked him to get up during their Fantasy Suite one-on-one.

Given all that, if Hannah does receive a proposal from Luke, there's essentially no way she'd accept. She might have ignored a lot of red flags thus far, but their most recent interactions appear to have solidified once and for all that he's not a good partner for her. All his return does is prove that Luke thinks it's romantic to "fight" for someone who has so clearly has stated she doesn't want to see him again. That's not romantic — that's unhealthy and invasive. Knowing Hannah, though, she'll have no problem standing up for himself and showing him the door once again, even when she shouldn't have to.