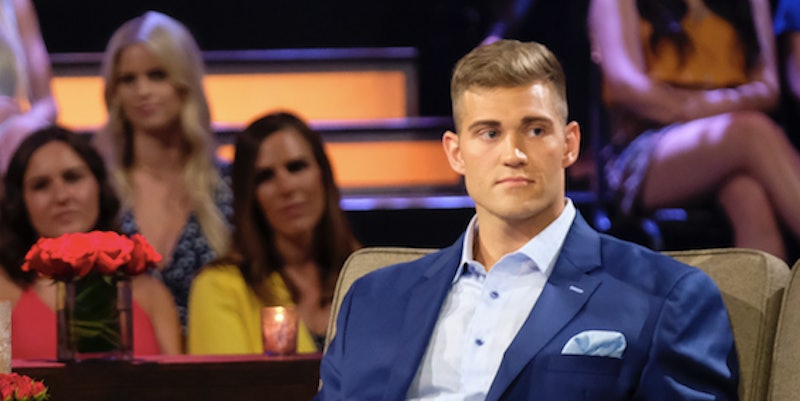 How do you solve a problem like Luke P.? Well, if his latest long-winded Instagram message to Bachelor Nation is any indication, you're not rid of his rants just yet. Luke P. explained his return to The Bachelorette, after Hannah sent him home during last week's Fantasy Suite episode. And for fans who have been following the season thus far, Luke's favorite topic, his faith, arises again.

He began his post, a photo of Hannah adorning him with the First Impression Rose at the start of the season, "I want you all to know why I went on this TV show and why I went back for @alabamahannah after she sent me home. I never wanted to go on the show to begin with, my sister in law @hleaparker22 signed me up and I kept an open mind."

Luke then explained that Hannah's commitment to her faith was one of the first things he was attracted to while watching her time on Colton Underwood's season. "Going through the interview process I watched Colton’s season and a beautiful southern girl stood out to me during the intro videos," he continued. "She told the cameras she respected Colton’s virginity and that it was super appealing to her that he was a virgin, and was the bachelor because sex was a big deal to her."

He added, "I saw her Instagram and in her bio read 'I love Jesus with my whole heart' I was sold and if I was going on this TV show it was for her." Luke then shared a particular proverb that the pair bonded over and some unseen conversations he claims they had concerning it on the show.

He continued: "I also noticed she told Colton how she wanted to be a wife of Noble character. I knew she was quoting Proverbs 31 which gave me the impression there is a way God could use this show... yes, even the "Bachelorette" as a way to bring him Glory. The first night I made her a Proverbs 31 bracelet then explained to her that I noticed what she said to Colton and I knew where it came from and how important my faith was to me. Shortly after that, I get the first impression rose."

But, as Bachelor Nation is acutely aware, things took a bit of a turn for the couple as Luke feuded with contestants, ruffled feathers with Hannah, and was ultimately sent home after expressing judgement over Hannah's fantasy suite decisions. A bright spot along the way was Luke's hometown date in Georgia, which he clarified in his caption:

"On my hometown date I brought Hannah to a bible study with my college church group, where I shared my story of how God transformed my life and gave me a desire to live my life for him in obedience, that included waiting until marriage for sex. Hannah on the date, stands up and tells the group her story of how she was convicted to live a life in pursuit of Jesus. She also told them that she wasn’t going to use the fantasy suites for sex but for conversation, no matter how @abcnetwork made it look."

So, previews for the Men Tell All episode suggest Luke is returning once more to make his case for a final rose and future with Hannah. He delved into his reasoning to finish his lengthy caption: "I had to go back and fight for her, I believed in my heart she was making the biggest mistake of her life based on what she was telling me, I wanted her to know that we could get through this and I was here for her. Of course all of these conversations were left out and I'm an 'evil pathological liar' so believe what you want."

Ultimately, it seems Luke's Instagram mea culpa will coincide with his final night on The Bachelorette. And we have faith he'll exit with a bang.