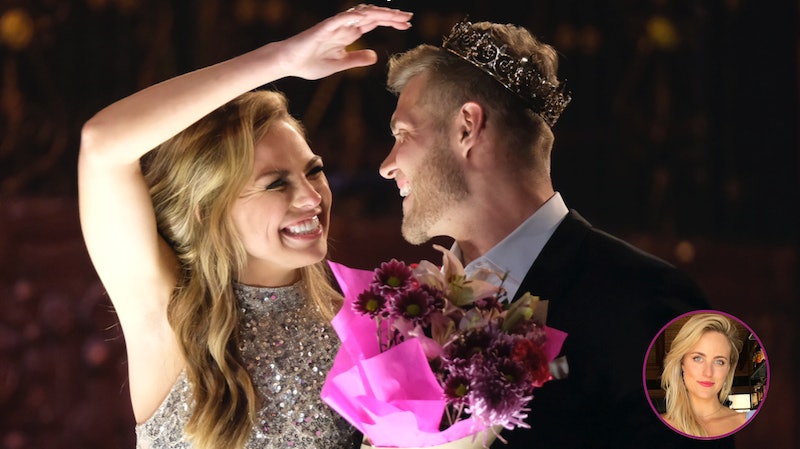 While competing on Arie Luyendyk Jr.'s Bachelor season and Season 5 of Bachelor in Paradise, Kendall Long experienced love and heartbreak on national television. Now that she's been through it all, she has plenty of words of wisdom for new contestants, and she's dishing all to Bustle. Read what Kendall has to say about Luke P.'s Bachelorette meltdown and more in this week's recap.

I suppose it was only a matter of time, but Week 3 on The Bachelorette began the slow and painful meltdowns of the show's most memorable contestants. Men who, at one point, were at the highest peak of the Hannah Mountain have now found themselves holding on for dear life, as an avalanche of "beefers" (Joe taught me this popular Chicago word which means tattlers) threatens their Bachelorette adventure. Oh, how the mighty have fallen in this cringeworthy episode. But hey, at least there was an alpaca!

This week starts off on a somewhat hopeful note for ABC Cam, as he is finally blessed with a group date. (It goes downhill from here.) The other guys don’t seem to be too thrilled about his inclusion on the date, especially Mike, since Cam stole some group date time last episode. But we can’t expect this guy to never get a date so off he goes along with Jonathan, Matteo, John Paul Jones, Tyler C., Mike, and Kevin on the date.

After a gathering of hugs and hellos — side note: the guys literally run to greet Hannah, and it is times like this where I wish we could see instant replays in slow motion. I remember the run-up greetings on my season always felt particularly awkward, so watching these guys light jog to Hannah, Baywatch-style, really brings back memories — the men and Hannah walk into a reenactment of a live birth played out by American Pie star Jason Biggs and fellow actor/wife, Jenny Mollen. I’d venture to guess that there is little child birth experience amongst this group; Tyler C. eloquently expresses his knowledge of pregnancy by explaining “your stomach gets bigger and bigger and the woman gets hungrier and hungrier.” If that was the case, maybe I’m pregnant every Thanksgiving.

The men are put through a variety of baby daddy tests, which include wearing pregnancy suits, safety pinned nipples, and caring for those crying baby dolls they use to give you in high school to scare you out of having sex.

But all of these tests were just the warm up to the main attraction: The Labor Simulator (meant to be read in a daunting echo voice).

I’ve seen this kind of simulation experienced before on YouTube and it’s meant to give the guys the same pain woman experience in childbirth. If the nipple clamping wasn’t enough to scare you into celibacy, then this might do the trick; the men were left grimacing in agony — Mike even went cross eyed! Tyler C. made childbirth look like a VERY uncomfortable photoshoot, a bit try-hard for me, but Hannah seemed to be digging it. The best reaction, by far, was from John Paul Jones: I think that boy saw Jesus as shocks coursed through his body.

The cringeworthy moments continued into the night portion of the date. Although it started off sweet with Jed’s chicken-nugget wish toss, the evening took a spicy turn when Cam interrupted Mike’s one-on-one time with Hannah. In Cam’s defense, he couldn’t have had a clue what Mike was talking about (losing his a child during the second trimester), but that didn't make it any easier to watch — Cam came in literally every 15 seconds! Mike didn't get the time he deserved in sharing such a devastating story, but then again, The Bachelorette has never been time forgiving on group dates.

Karma came for Cam later when Jonathan walked in like a man on a mission to disrupt Cam's one-on-one conversation. A valiant effort, Jonathan, but poor Hannah was left in the middle of a super awkward bickering battle! I always feel it’s best to not waste your time, and let the dead bury the dead.

When Jonathan returned to the group after his time with Hannah he was greeted by Creepy Cam, who proceeded to straight up death-stare in his direction until his prey (Jonathan) acknowledged him. This scene kind of reminded me of chickens puffing up their feathers to look all big and tough to their competitors when trying to snag a mate. All puff, no action. Gotta love John Paul Jones watching the whole scene while scarfing down chicken nuggets.

At the end of the night, Mike’s vulnerability was rewarded with a rose — Team Mike! He is seen smiling ear-to-ear as Hannah points out “bold can be shown in a lot of different ways.” Well-said girl!

Unfortunately, Hannah just can’t seem to cut a break this episode. The day after the group date, Hannah is seen in a hospital bed after fainting that morning, meaning the one-on-one date scheduled with Connor will be canceled. But fear not, Connor! Hannah invites him to keep her company as she recovers. Joe and I have been on countless dates, but the best times together are always those spent cuddling in bed, so I see this as a win for Connor. He heads over, flowers and soup in hand, to comfort a woozy Hannah.

After some cuddling and chat time (Connor opened up about his mom's stroke), Hannah sends him on his way — without a rose! — so she can get some rest, per "doctor's orders." Wanting Hannah to wake up to a little something special, Connor places love letters all around her place. (I admire a good sappy sticky-note!) There must have been some magic in that soup that Connor brought over, because Hannah recovers quick enough to meet Connor for some post-dinner serenading by the lovely voice of Lukas Graham. And yes, Connor ends the night by getting a rose. Post-It notes for the win!

The next morning Hannah is fully recovered and ready for the second group date of the week with Devin, Luke P., Garrett, Joey, Grant, Luke S., and Peter. They head off to a photoshoot with the cutest supermodels I’ve ever laid eyes on, cute and furry pets! And yes… there was an alpaca in the mix. The animals were a much needed pick-me-up after a somewhat chaotic week. With that said, more drama awaits, as the day is young and full of watchful eyes; Demi's watchful eyes to be exact! Demi is once again summoned to spy on the unsuspecting men as they prep for the shoot by a flirtatious undercover makeup artist and animal trainer. Either these guys are ALL here for the right reasons or they caught on to the fact that they are all currently mic’d up. Even Luke P., whose intentions could somewhat be questioned, showed extreme loyalty by saying he was “developing a genuine real relationship with this girl.” Looks like all they guys passed the test!

During the cocktail party that night, Luke P. struggles to hold onto his power position when Hannah calls him out for having too much confidence, saying he “stole the show, but in a negative way.” Hannah makes it clear that he has to change his ways if he expects their relationship to advance. The condemning of his behavior is obviously a huge bruise to his ego; he even considered leaving, saying he “can’t say (he’s) in love with her." (This is completely night and day from what he was saying last episode.) We are definitely seeing his true colors now that he didn't get his way.

The night gets worse for Luke P. as he continuously tries to get more time with Hannah, going as far as trying to physically block Peter from having one-on-one time with her. (Not a good look, Luke.) Although there was a bit of turbulence, Peter the pilot will have smooth sailing into the next rose ceremony after being rewarded the group date rose. (Too many plane puns?)

The following morning, Chris Harrison informs the guys that there will be a tailgate in place of the cocktail party that day. Immediately — like truly right away — Cam sobers the enthusiastic mood by telling the guys that he needs to have serious conversation with Hannah that could potentially send him home. He finishes off his speech with a “metaphorical cheers” as the gentleman are left doubting his sincerity.

At the tailgate, Hannah hopes for a care-free day after the ups and downs of that week, but corn-hole can only do so much before Cam steals Hannah away for a chat. He tells a confusing story about needing his leg amputated/ his grandma dying before his surgery/ and his 10 month puppy being left at home. I’m just confused if he actually had his leg amputated or if he is rocking am amazing prostatic? That and… why would he think Hannah would send him home for that? Of course, none of these questions are answered, and we are all left trying to steal glimpses of Cam’s leg for the remainder of the episode.

Mike disappoints me when he uses his one-on-one time to rat out Cam by saying Cam was planning to “tell a sad story to get a pity rose,” which were words Cam never stated. Mike, don’t stoop to that level! Tsk, tsk.

Hannah confronts Cam, who attempts to explain himself, but the damage is already done. Hannah calls their earlier conversation "really calculated” and says she “needs to think about it.” Eek… things do not look good for ABC Cam.

At the rose ceremony, Cam and Luke P. are left squirming from their uncomfortable week. Luke P., who is somewhat hanging off the cliff of Breakup Mountain, is thrown a rope (and a rose) and is safe... for now. I swear I heard a universal sigh of relief as Cam was left empty handed. Him along, with Joey and Jonathan, were sent packing. Cam leaves the mansion with a “thanks for the opportunity,” job interview-style goodbye. I guess he’s going to need all the interview practice he can get, since he quit his job to get on the show.