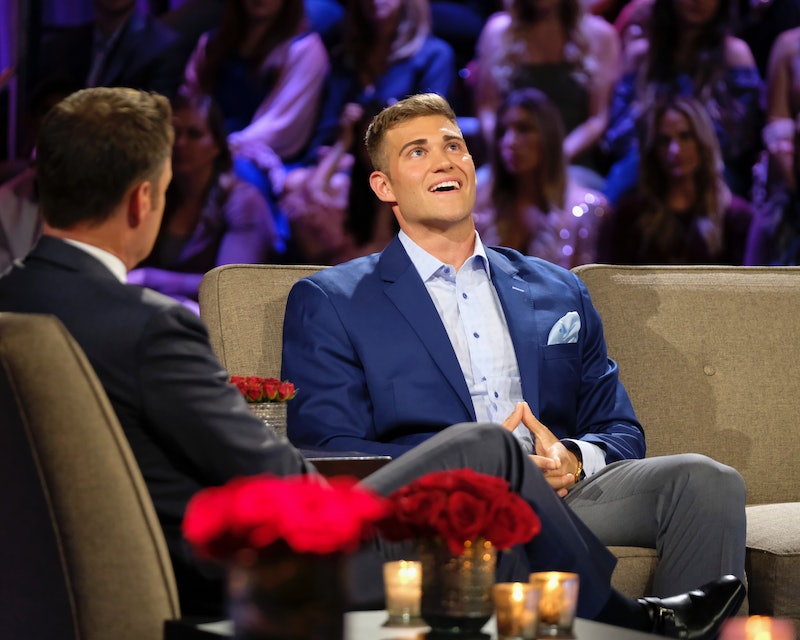 To say that Luke P. overstayed his welcome on The Bachelorette would be an understatement. Just when it would look as though he was finally on his way out the door, he'd somehow manage to still come back and dominate the majority of the episode. But while it may all have seemed like it was done in the name of extra drama, the reason why Luke P. was allowed to return to The Bachelorette not once, but twice, wasn't just about adding further fuel to the fire. At least, that's the story Chris Harrison is sticking to right now.

During a recent interview with Entertainment Tonight, the Bachelor host opened up about Luke's constant presence on the show and why producers allowed for him to stick around so much long despite Hannah B.'s wishes to see him sent packing. "There were a lot of discussions about Luke [coming back the second time]," Harrison admitted to ET, though he was adamant in claiming that the drama aspect didn't play a key role in the decision. "We, as producers, were thinking there's going to be some Luke P. fatigue setting in about now, and, if left to our devices, we probably would have gotten rid of him and that story line earlier to get Hannah on track for what we would hope to be a happy ending."

According to Harrison, it felt as though Hannah and Luke P. couldn't seem to fully close the chapter on their relationship, which is why producers thought it would be best to see their story through to the end, so that both parties could walk away with some closure. "We knew there would be fatigue," Harrison explained. "But Hannah and Luke P. couldn't resolve their relationship and their issues, so therefore it lingered on, and he needed to come back, because it wasn't done. And he wasn't done."

But here's the thing about that statement, though. This season was never supposed to be about Luke P. and what he wanted. It was supposed to be about Hannah (you know, the actual Bachelorette) and she had made it very clear that she was done with this relationship. (Having your religious beliefs get called into question alongside a heaping mound of slut-shaming will do that to you.) It was bad enough that Luke P. was able to claw his way back into the competition after Hannah eliminated him the first time during their one-on-one date. But then to do it again after their heated discussion during Fantasy Suites was absolutely unnecessary.

And while one could argue that Luke wouldn't have been able to pursue and harass Hannah any further without production's help (there's no way he got a ring, rented a van, and knew the rose ceremony location all on his own), Harrison insists that the show could've taken things even further, but didn't want to put Hannah through that. "I could have pushed it even further, and it could have been a mess, if we really wanted that as television. That's not what we wanted there. I didn't want Hannah to have that in her life," Harrison stated. "An altercation... had no purpose for us. The purpose [of having Parker come back] was, make your final choice, make it in front of the men... let's move on."

For his part, Luke P. has also spoken out about why he returned to the show, against Hannah's wishes, in a rather lengthy Instagram post, which centered once again around his faith. Nevertheless, it still went against Hannah's wishes, which seemed to get constantly ignored by everyone around her. Let's just hope that the next time a woman says no on this show, her decision will be given the respect and attention it deserves.