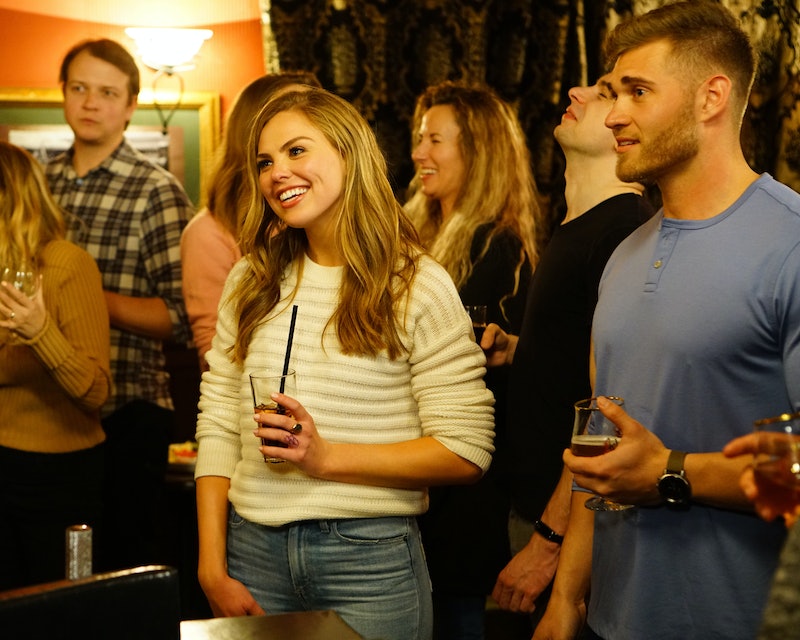 Fans have seen some pretty outrageous dates on The Bachelorette, but on Monday night, the Latvian bungee jumping date was definitely something else. And of course, one of Hannah's contestants wasn't impressed with it. Luke P.'s reaction to Hannah's naked bungee jumping date was totally out of line, and unsurprisingly, it seems like his toxic behavior has continued on to another week.

After Luke found out what Hannah's one-on-one date with Garrett entailed, he confronted her on the group date, and basically let her know that it was not OK with him. He even compared it to cheating — but this is The Bachelorette, and the whole point is for Hannah to explore relationships with different people before settling on the person she wants to spend the rest of her life with. She doesn't owe Luke P. anything.

On top of that, Luke also mentioned that he'd support her no matter what "boneheaded" things she might do, and it seemed like this date, in his eyes, fell into that category. Except it wasn't boneheaded at all — it was brave to get naked and jump out of a cable car (in the snow!) and it was 100% Hannah's prerogative to participate in that adventure. It was no wonder that by the end of their conversation, she didn't look happy.

And being that this is Luke we're talking about, of course things got much worse when the topic came up again later in the episode. Out of nowhere, Hannah went into the suite where the guys were staying and asked Luke to come talk to her... and it wasn't because she wanted to steal a few extra minutes with him.

She confronted him again about the conversation they had about the bungee jumping after having a few days to process it, and she let him know exactly what she was thinking: while she appreciated him having a real conversation with her, she didn't like what he was insinuating. "You're not my husband. You don't own me. You don't own my body," she told him.

Luke tried to explain his way out of it, but it didn't work. Hannah was disappointed in him, because still, he hasn't let her see the real him, and she was frustrated that their relationship has been so difficult. Luke has proven time and time again that he's not the guy for Hannah — unless the guy Hannah's looking for is someone who wants to control her. She should have the freedom to do what she wants with who she wants, especially while she's still trying to figure this out, and anyone who's on the show this late in the game needs to be supportive of that.

Somehow, she still decided to give Luke a rose, so maybe she's hoping that he'll turn it all around. If there's one thing Hannah doesn't tolerate, it's being told what to do, so it seems likely that Luke's going to get himself into trouble again... probably very, very soon.