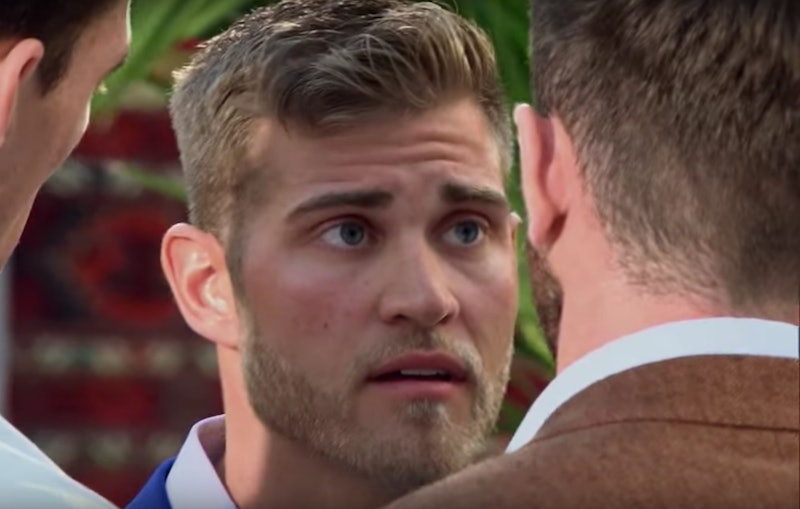 Despite the fact that Hannah sent Luke P. home during their Fantasy Suite date last week, apparently, the man really just doesn't know how to leave well enough alone. On Monday night, Luke P. returned to The Bachelorette to explain himself to Hannah... and let's just say it did not go as planned. In fact, it was perhaps the most bonkers sequence of events in the show's history.

Under no circumstances should Luke have expected Hannah to be receptive to whatever he had to say. Last time they interacted, he basically slut-shamed her, and she shut him down like a champ. When he showed up again unexpectedly looking for "closure," she let him know she had no interest in giving him a second more of her time, and Luke definitely didn't get what he was looking for.

The whole ordeal was simultaneously the best and worst moment in the Bachelor franchise: the worst because it was invasive and over the line (seriously, the producers shouldn't have let this happen), but the best because Hannah handled it perfectly. And admittedly, it also made for some pretty damn entertaining TV.

If you're still trying to process what exactly you just saw, here's a breakdown.

Luke wielding a shaky camera while uttering that Hannah was "sadly mistaken" when she thought she'd seen the last of him is guaranteed to give you nightmares. He acted as if the biggest obstacle standing in their way was Hannah thinking he might not be interested in her because she had sex in the Fantasy Suite... uh, no, Luke. Seems like you're the one sadly mistaken.

At this point, the other guys didn't know that Luke had already been sent home, so when he joined them at the rose ceremony, they didn't realize something was amiss. But, like, Luke showed up for a rose ceremony and pretended like everything was normal after he had been sent home. There are no words.

Hannah Realizing Luke Was There

First of all, Hannah walking into the rose ceremony was a scene straight out of a horror movie, scary music and all. Second of all, this is not the face of a happy woman. If she looked confused about why a man who she sent home was still, in fact, on the show, that's because she was. She assumed that Luke understood her when she said their relationship was over, but that was clearly not the case.

The Men Finding Out Luke Wasn't Supposed To Be There

After Hannah started telling Luke to leave, Jed, Tyler, and Peter realized that he had actually already been sent home, and their WTF reactions were just *chef's kiss* perfect.

In what was the best moment of the night — and perhaps of this entire season, or maybe even every season, of The Bachelorette — Hannah took matters into her own hands. When Luke refused to move out of her way, she picked up the rose podium and moved it in front of him so he'd no longer be part of the rose ceremony. In the words of John Paul Jones, "Yasss, queen."

Tyler's "Or What" Moment

Don't mess with Hannah, Luke. You'll have to go through Tyler C — and Jed and Peter — first. And TBH, they have a few inches on you.

He finally got the picture when Hannah told him, in no uncertain terms, that she no longer had feelings for him. How's that for clarity?

As entertaining as this scene was, it's for the best that things are finally over between Luke and Hannah. Now we can all move on... but the podium moment will live on forever.