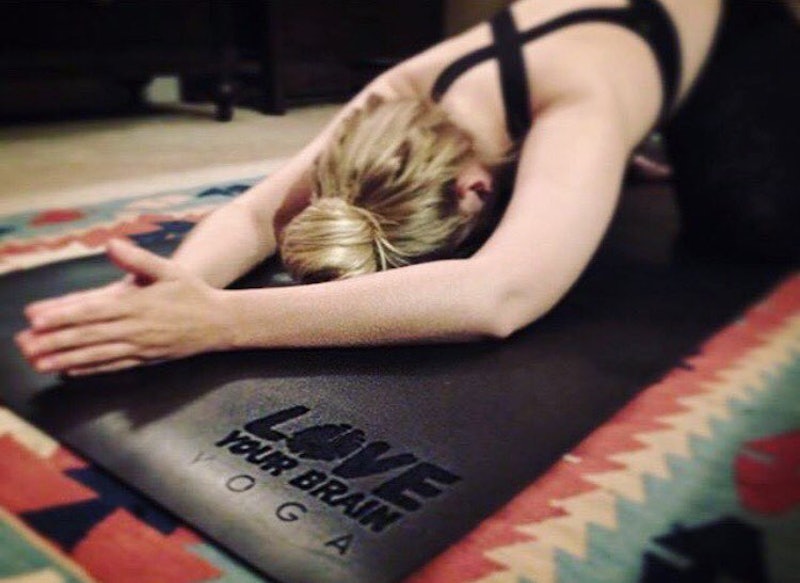 While yoga often brings to mind relaxation, mindful movement, and a really great reason to slip into your favorite pair of stretchy pants, for former professional snowboarder Kevin Pearce, it's been a part of his healing from a traumatic brain injury (TBI). And since March marks the official Brain Injury Awareness Month, Lululemon and Pearce teamed up to create a poignant, powerful video about the effects of TBI—and how yoga can bring peace and progress to the 2.5 million people it affects every year.

Lululemon elite ambassador Pearce sustained a traumatic brain injury when he hit his head on the halfpipe in 2009, while he was in training for the 2010 Vancouver Olympics. His remarkable recovery process inspired him to co-found a non-profit organization with his brother called LoveYourBrain, which aims to build community around people affected by a TBI and help them move forward and, as the name suggests, love their brains no matter where they are in their journey.

In addition to educational curriculum and retreats, a major part of the foundation's work is with yoga. LoveYourBrain yoga classes are specifically tailored to people who've sustained a TBI. They're offered in seven states (and counting) now, but they've teamed up with Lululemon to grow the initiative in a couple of ways. First, they created an inspiring video about what life is like after a TBI, and how yoga can help.

"Yoga allows me to feel something that I can't feel anywhere else. Everything is able to become more calm and a little bit more easy. It empowers me and makes me feel so able and so good about myself, and that allows me to accept this new person that I am," Pearce says in the video.

Lululemon, Pearce, and the LoveYourBrain team are also embarking on a tour of the West Coast for Brain Injury Awareness Month. Through a series of different and unique events, they'll be sharing Pearce's story, raising money, and bringing awareness to the effects of TBI. And of course, doing some yoga along the way, too. So far, they've hit up Ojai and Los Angeles, California, but there are stops ahead in San Francisco, Tahoe, Bend, Portland, Vancouver, and finally, Whistler on March 22.

For more information on the stops, check out the tour's Tumblr here, and read more about the film and the initiative on Lululemon's website here. And while you're breaking out the credit card for a pair of classic Wunder Unders or a new sports bra, consider donating to LoveYourBrain here—for every $21 donated, Lululemon will match it, and together the donation will enable a TBI survivor to take part in a LoveYourBrain yoga class.

More like this
Google Wants You To Shop Black-Owned The Friday After Thanksgiving
By Dominique Norman
Kim Kardashian Fans Are Calling On Her To Condemn Balenciaga’s Latest Campaign
By El Hunt
The Best Heels For Bunions, According To A Podiatrist
By Margeaux Baulch Klein and Maria Cassano
Kim Kardashian & Tristan Thompson Had An "Inspiring" Thanksgiving Celebration
By Brad Witter
Get Even More From Bustle — Sign Up For The Newsletter