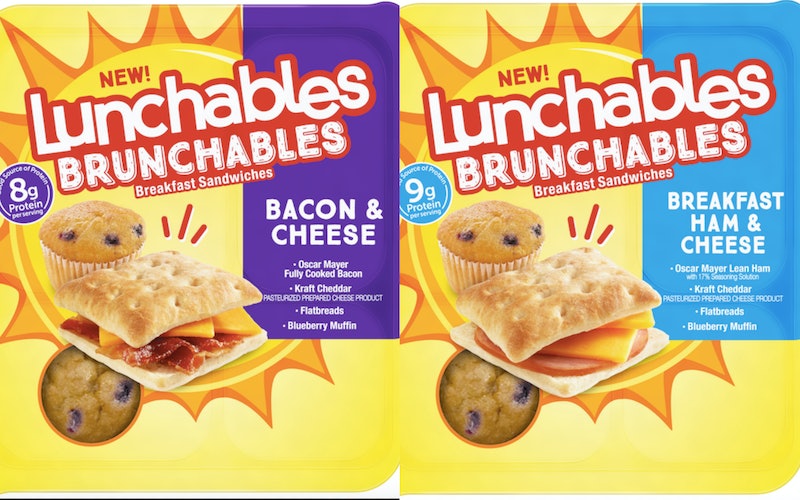 Chances are, if you were on the internet yesterday, you came across some news that was fake. This is not to be confused with "fake news;" just news that was fake as an April Fools' Day prank. But now, it's time for some news that seemed fake, but actually isn't. Lunchables is introducing Brunchables. Picture what you think these look like, and you're probably pretty close. Unless you're picturing eggs. If you're picturing cold, stackable eggs, please start over.

Lunchables shared a photo of a Brunchable on Twitter on April 1 to drum up some "is it real or is it not" anticipation. But, unlike many April Fools' marketing schemes, this one is actually for a real product. Soon, anyone will be able to relive their childhood spent determining the best order in which to stack meat, cheese, and carbs. And, you know, actual children will be able to eat the new product, too.

Brunchables aren't being released just yet, but people who are intrigued by them can sign up for the chance to receive free Brunchables before they are officially on the market. Starting today, those who are interested can enter their name, email, and date of birth on BrunchablesIsReal.com and may be chosen to be one of 100 people to try Brunchables first with a "sneak peek pack." The giveaway will be open for 72 hours and will close at 11:59 p.m. CT on Thursday, April 4. Entering will also put potential customers on an email list that will let them know when Brunchables are available in stores.

Brunchables aren't the only new product Lunchables has come out with since you probably remember eating them. In 2018, the brand introduced desserts as part of its snacks lineup. The Dunk-a-roos-like snacks come in the flavors Dirt Cake, S'mores Dippers, and Cookie Dunks. The other Lunchables snacks are sort of like mini versions of the original cracker stacks. The more savory Snack Duos come in a two-pack with mini Ritz crackers and either ham and cheddar or turkey and mozzarella. There are also now two organic varieties of Lunchables available: Extra Cheesy Pizza and Pizza with Pepperoni. How times have changed.

If you want to try Brunchables — either as an on-the-go breakfast or, let's be real, a novelty item — you'll have to wait a while longer. So, for now, I guess just get to work planning your brunch party. What pairs well with pre-portioned breakfast sandwiches and mini muffins...