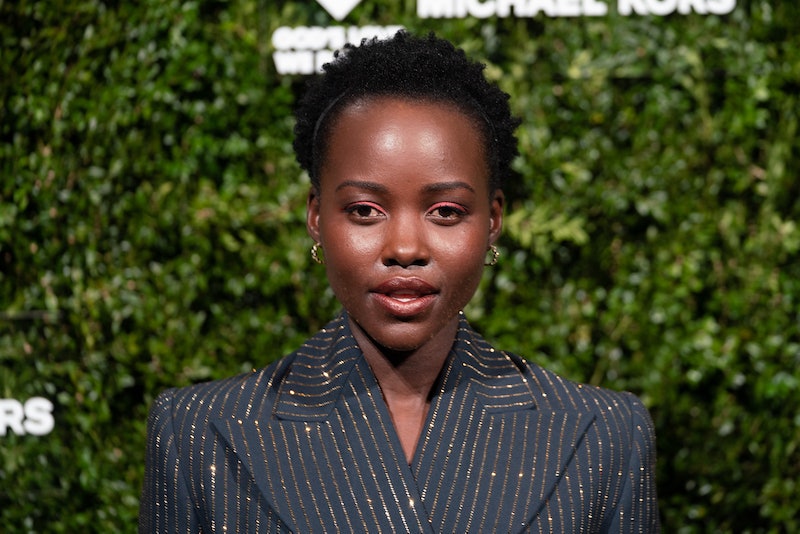 Lupita Nyong'o is changing her name. From now on, you can refer to her as Troublemaker. The Oscar-winning actor, activist, and children's book author, is adding musician to her growing résumé. Nyong'o raps on Ciara's "Melanin," bringing her alter-ego, Troublemaker, out on a track for the very first time. On her debut, she's collaborating with Ciara, La La Anthony, City Girls, and Ester Dean, as they all share the importance of being proud of your skin color.

"Melanin" dropped Friday, Nov. 22, just a few days before Ciara is set to host the American Music Awards. And while Ciara wouldn't reveal to Entertainment Tonight if she'll be bringing Nyong'o, La La, Yung Miami and JT of City Girls, and Dean — or as she called them "my melanin queen friends" — on stage with her to perform "Melanin," she did dish on the actor's first rap. "My girl Lupita N'yongo, she drops bars. This is the first time that Troublemaker made her appearance, so it's crazy," Ciara told ET.

Nyong'o completely embraces her alter ego on the track, rapping, "This Troublemaker back on the scene." Later in her feature, she celebrates the power of women of color loving their skin. "My hue, I'm dark chocolate / Movie deals I get a lot / Yeah, because I'm a brown-skinned girl / These melanin chicks 'bout to run the whole world."

Nyong'o credited actor Miriam A. Hyman (who goes by Robyn Hood in her music career) for writing her rap for "Melanin" on Instagram. She noted that Ciara had asked her to be on the song and "you know I had to show up and show out!"

Nyong'o has long been an advocate of women of color embracing their skin. When she accepted the Best Breakthrough Performance Award at Essence's Black Women in Hollywood Awards in 2014, the 12 Years a Slave star shared that she used to feel "unbeautiful" because she only saw pale skin in the media. She said she was teased for her skin color and would pray for lighter skin. It wasn't until she saw the influence of the South Sudanese model Alek Wek that she not only saw someone who reflected her, but also realized the importance of recognizing her own beauty.

She also recently wrote a New York Times' bestselling children's book about this topic called Sulwe. Just a week before "Melanin," Nyong'o released a song to accompany the book that she wrote and performed. In an Instagram post about "Sulwe's Song," she wrote, "It is an ode to #Sulwe and a little melody to keep in your heart any time you need a reminder that the key to unlocking your purpose and value in this life is inside you (yes, you!)."

While "Melanin" marks Nyongo's first time rapping publicly, it also ties into her larger message of self-love — in particular, for women and girls who share her dark skin tone. And like "Brown-Skinned Girl" before it, where the Us star also got name-checked, "Melanin" makes this message even clearer — and something to sing along to.