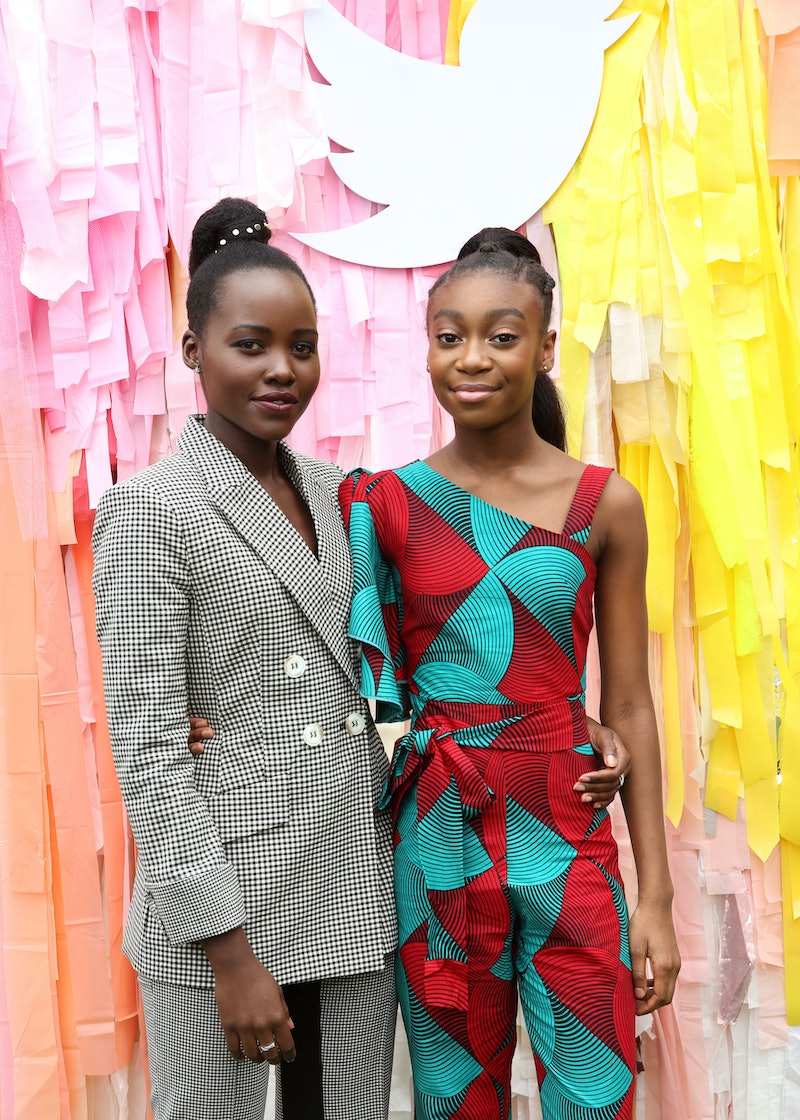 When Us director Jordan Peele called "cut," one of the horror film's actors still clutched tightly to her character's scissors — metaphorically speaking, of course. Really digging into her role, Lupita Nyong'o scared Us onscreen daughter Shahadi Wright Joseph by adopting some seriously frightening method acting. During a live March 21 interview on BuzzFeed News' AM to DM online morning show, Joseph, who plays both Zora and Umbrae, revealed that the Oscar winner often channeled her evil character, Red, even while not shooting. (Nyong'o also plays the non-evil lookalike version of Red named Adelaide Wilson in the movie, which will hit theaters nationwide on March 22.)

“She really kinda spooked me out a little bit,” Joseph revealed to BuzzFeed of the actor she costarred with alongside Black Panther's Winston Duke. “She would really get into character and wouldn’t talk. It was kind of creepy.”

Even so, there were definitely some lighter moments on set to balance all of that out as well — and Nyong'o always kept Joseph on her toes. As the 13-year-old actor added, "It's a lot of fun because you never know which [Lupita] you're gonna get sometimes, which I think makes her perfect for this role because she has so many great different personalities."

Nyong'o didn't save all of the scares for her castmates, however. While promoting her new flick on CBS' The Late Show with Stephen Colbert on Monday, March 18, she wore a pair of gold-colored contact lenses, which the late night host called "particularly arresting." After Nyong'o joked that she's "going for the darkest things in life right now," Colbert found himself utterly distracted more than once. “It’s a little scary," he told her during the sit-down. "I’ll try to pay attention to what you’re saying.”

The fact of the matter, however, is that even Nyong'o herself was afraid of her character (along with the others) before she even began filming. “I was fairly terrified just reading the script,” Nyong'o admitted in a Rolling Stone cover story interview. She elaborated about how she pulled it all off:

"I definitely had to go to some dark, dark corners of my being to embody the one scary character. It was very intimidating to think of that character as scary or evil, you know those kinds of words I found to be debilitating. So, it was about getting beyond that because when you watch these scary movies, the evil is so ominous that it feels larger than life. To try and embody that can be quite daunting. So, it was about just really deeply investigating the character’s emotional motivation and being situated in that and allowing that to magnify the character."

Nyong'o isn't the only icon that Joseph will share billing with in theaters this year. In July, she'll play the young version of Nala in Disney's remake of The Lion King. And though it won't be her first time filling the role (she previously played Nala onstage in a Broadway production), it will, however, be the first time she plays the same character as Beyoncé, whom she's looking forward to officially meeting in the near future.

“It was great to reprise the role and make [Nala] different,” Joseph added to BuzzFeed. “It was a lot of fun and I think that we had some fun times on set.”

Unless actor Chiwetel Ejiofor really digs into his Scar character, suffice it to say that experience must've been quite different from the one Joseph had dodging Nyong'o's scares between takes while filming Us.