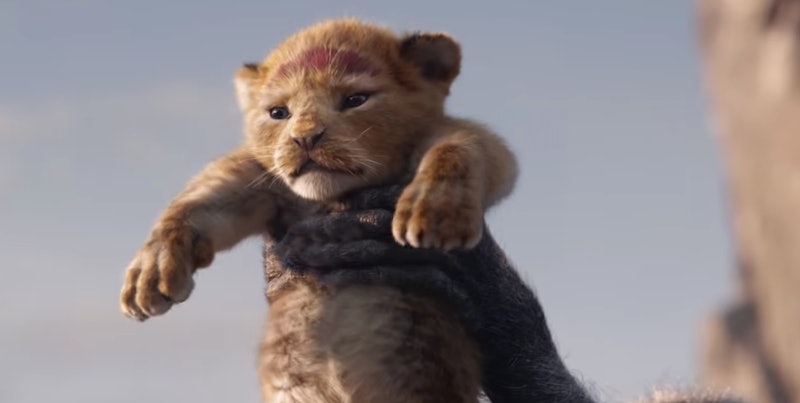 Right around the time when most of America was sitting down with their friends and family for Thanksgiving dinner, Disney decided to drop one of the best surprises of the holiday season thus far. The first trailer for The Lion King debuted, and it quickly became the most-viewed Disney trailer premiere ever. The iconic sounds of "The Circle of Life" were able to not only transport audiences back to the classic 1994 animated film, but it also made us want to watch it again. And again. And again. So much so that, on top of that first accomplishment, it's also the second most-viewed trailer of all time, behind Avengers: Infinity War, a Marvel Studios film, which is also owned by Disney, as reported by Deadline.

On Nov. 22, the Walt Disney Studios released the teaser trailer for the upcoming remake of The Lion King on YouTube. The film is set to debut on July 19, 2019, but fans can be super thankful this year that the teaser was released when it was. And on Nov. 24, Disney spread some of that thankfulness around to its fans via Twitter for helping The Lion King trailer reach this record with 224.6 million global views in 24 hours.

The trailer shows all of the same iconic shots that viewers saw in the 1994 film, only this time the animals are real — well real-ish. The film appears to be beautifully laid out, and it showcases how life-like the new CGI cast members will be, while still maintaining the heart of its predecessor. In short, it's visually stunning in a way that seems to have taken many fans by surprise.

It's not a mystery as to why the trailer received such a response from audiences, though. On top of being one the most beloved Disney movies, The Lion King won two Golden Globes and two Oscars, and inspired the wildly successful Broadway adaptation that has had continuous runs and productions for the past two decades. This new version also has an all-star cast that has viewers anxiously waiting to see the beloved animated film come to life in a new and exciting way on the big screen.

Donald Glover will voice the adult version of Simba, originally voiced by Matthew Broderick. Chiwetel Ejiofor will play his evil uncle, Scar, and the fabulous duo of Timon and Pumba will be voiced by Billy Eichner and the equally hilarious Seth Rogen, respectively. The cast also includes Alfre Woodard as the voice of Sarabi, Simba's mom, and James Earl Jones will be reprising his role as Mufasa, the king of the Pride Lands. Finally, the one and only Beyoncé will be voicing Nala, Simba's childhood friend and future love interest.

See? The film has basically achieved legendary status already with that star-studded cast alone. The combination of powerhouse performers and nostalgia is powerful, and these two things combined no doubt helped The Lion King trailer set a new record for Disney.

This movie is a big deal for anyone who grew up with the animated classic, so everyone will understand if you want to just rewatch the trailer every day until summer 2019. Basically, if the movie doesn't get here soon, the trailer will likely smash all of the records just based on fan anticipation alone — and that's definitely good news for Disney.