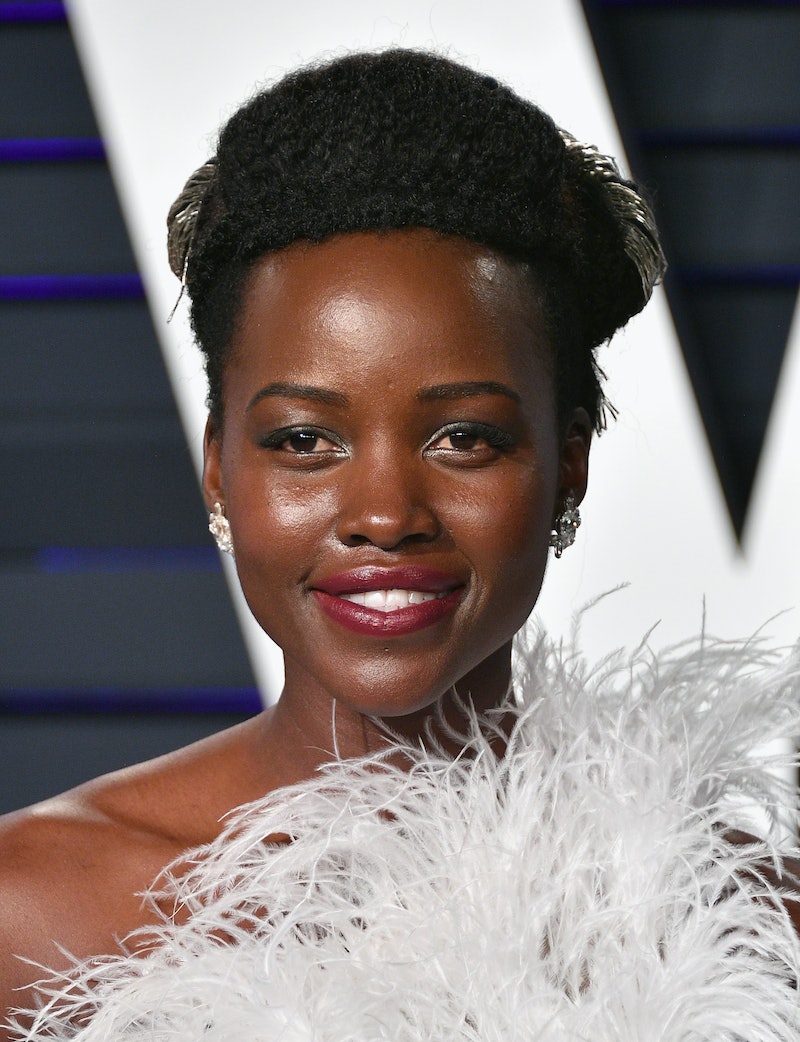 Actor Lupita Nyong'o is the definition of Black Girl Magic. The actor is not only a superstar on the silver screen, but a style stunner on the red carpet. It goes without saying that Lupita Nyong'o 2019 Oscars After Party outfit will totally knock you out of orbit and send you to another stratosphere. Just wait until you see this glam in action.

Nyong’o actually skipped the Oscars red carpet, much to the dismay of fashion and film fans. But the Black Panther star pulled out all the stops when attending the official Vanity Fair Oscars After Party. Nyong’o wore a full and fluffy white feathered gown to the party, which definitely solidified her status as a style star.

The Oscar de la Renta gown featured a single shoulder strap and a sizable train. Though the dress was "glam" in back, it was "party" in front with a mini dress length to show off her legs. That length was much needed to break up the fluffed feathers that covered her entire frock.

The gown was cinched with a black sash that defined her waist, giving some much needed shape to the voluminous look. With a high-low hemline, the gown showed off her simple black Roger Vivier sandals. Nyong'o accessorized with Forevermark diamond earrings and rings, and a Tyler Ellis clutch. Stylist Micaela Erlanger, who was responsible for the glamorous look, posted a closer look at the gorgeous accessories on Instagram.

Nyong'o also posted a photo of the full look on Instagram, captioning it "Light as a feather." And she certainly looked ethereal in the look. Check out these pictures with Nyong'o bathed in sunlight.

To complement her stunner of a gown, Nyong'o pulled her hair back into braided chignon with some added height at the crown. The updo also featured an elaborate fringed clip in silver that added additional sparkle to her hair. The major clip mimicked the feathers on her gown, pulling the look together from head to toe.

Her makeup, in true Lupita fashion, was stunningly simple. With a light smoky eye and a subtle berry lip, Nyong'o kept the focus on her massive and marvelous gown. It was a choice that stayed true to her beauty style, but also complimented the bold fashion look.

Though Nyong'o was snubbed by the Academy for her role in Black Panther, the film was up for Best Picture at film’s biggest night. The night's biggest honor, however, went to fellow nominee, Green Book.

Though Nyong’o didn’t secure a nomination, it isn’t clear why the actor didn't walk the red carpet — especially since she attended many weekend festivities leading up to the live show. She was even seen in the audience of the live show with her Black Panther cast mates, adding further confusion to her red carpet absence.

Regardless of her MIA moment at the beginning of the night, Nyong’o’s jaw-dropping feathered frock made up for her red carpet snub — and then some.