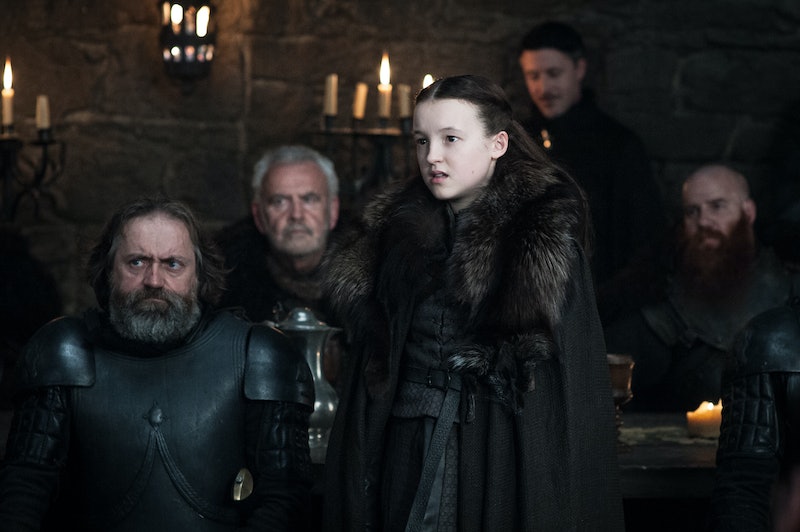 The North is getting down to business to defeat the White Walkers, but this time women are joining the fight. Little Lyanna Mormont's feminist speech on Game of Thrones proved that she won't let women be left out of this great war, no matter how much the men try to stop them. (Hey, sounds a little like how our real world is right now.)

"I may be small and I may be a girl," she said, "but I am every bit of Northern as you ... I won't be knitting by the fire while men fight for me."

Personally, I would prefer it if both men and women had the option to either fight or knit — but this is not an ideal world, and I love that women are being allowed to train and fight on Game of Thrones right along with the men. That's rarely something that we see in real life, and far too often we see fantasy shows like Game of Thrones stick to old-fashioned patriarchal traditions.

Lyanna is just the best, isn't she? Sansa and Brienne were certainly impressed with her. Westeros needs more leaders like her — sound, stern, and forward-thinking. Her speech also set up a theme for the episode, and maybe the season as a whole. The idea that girls stay home and boys go to fight other people's wars was reinstated by the Lannister soldiers that Arya Stark encountered on the road — but these women aren't about that life.

Change is finally coming to Westeros, both with Daenerys' bold strokes and smaller movements like this. As a feminist fan of the show, I couldn't be more thrilled. Especially because speeches like these are motivational outside of the show as well. We live in a political time when women are fighting and resisting and taking their power back — and Lyanna gave us a rallying cry we can all stand by.