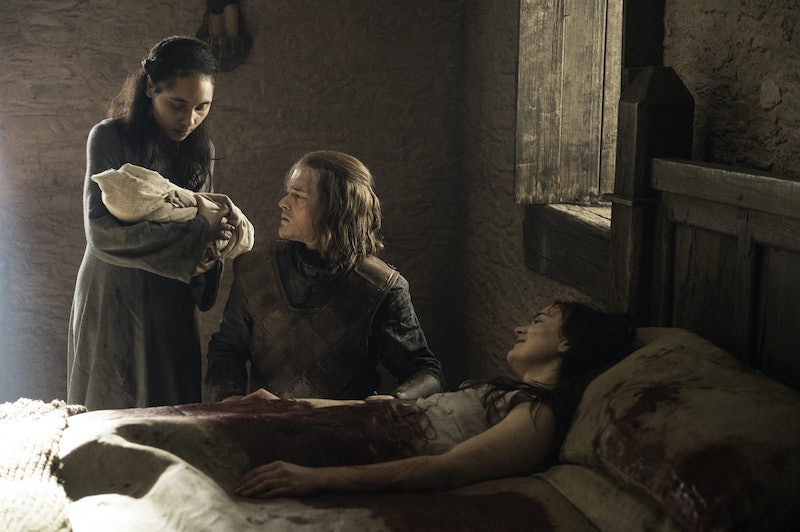 In the HBO world, a title is worth a thousand words and the Game of Thrones Season 7 finale title may not mean what you think it means. Upon first glance, "The Dragon And The Wolf" seems to be referring to the Mother of Dragons and the White Wolf, also known as Daenerys Targaryen and Jon Snow. But what if it also or instead talking about Jon Snow's parents, Lyanna Stark and Rhaegar Targaryen?

Earlier in Season 7, Gilly dropped a massive hint about "Prince Ragger" having gotten an annulment from his wife and remarried in a secret ceremony in Dorne. Rhaegar Targaryen, as fans know, was married to the Dornish princess Elia Martell. Lyanna Stark gave birth to Jon in the Tower of Joy, which is also located in Dorne. So it's pretty clear that Gilly was reading about this hidden scandal. What it means, of course, is that Jon Snow is not a bastard after all. He is a true born Targaryen prince and rightful heir to the Iron Throne.

Robert's Rebellion, which resulted in the end of the Targaryen Dynasty in Westeros, started when Rhaegar Targaryen seemingly kidnapped and raped Lyanna Stark. However, it has long been suspected by fans that the two actually ran off together and eloped. The prince once shocked a tournament audience by presenting flowers to Lyanna instead of his wife, thus crowning her "the Queen of love and beauty." Both Gilly's clue and the episode title seem to support that theory that the two were actually involved in a secret love affair as well. Lyanna's father described her as wild and having wolf blood. She was often called the wolf girl, or the she-wolf. Rhaegar, on the other hand, was called "the last dragon" by Jorah Mormont.

Is Game of Thrones finally giving us their alleged love story? Actor Aisling Franchiosi played Lyanna Stark in a flashback in the Season 6 finale. It would be nice to finally meet Rhaegar. It's possible that the title is meant for audiences to compare Jon and Dany to Rhaegar and Lyanna, which, given the blood connection, is a little off-putting. It could also be referring to the two polar opposite houses in general — or the upcoming adventures of Nymeria and Drogon. Who knows!

That said, it is unlikely that Gilly's small discovery won't be addressed again in Season 7. Rhaegar Targaryen and Lyanna Stark are true contenders for the meaning behind the finale title. It's high time that these two characters, who gave their lives and set the stage for this entire tale, finally got to tell their own side of the story.