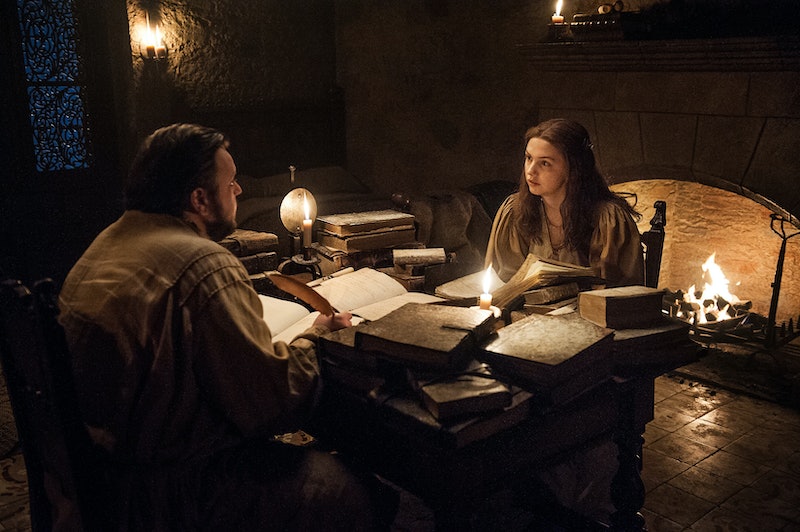 Y'all, I have never yelled at a fictional character in my life the way I yelled at Samwell Tarly during this most recent episode of Game Of Thrones. This whole season he's been uncovering deep and hidden secrets about life Westeros, all while going through his boring day-to-day maester training at the Citadel. And the one time Gilly tries to help him, she finds what might be the most shocking discovery of all, only for Samwell to interrupt her and literally quit and leave. So now I guess we're never going to know the truth about Prince Rhaeger Targaryen's anullment — which is bad news for fans, because that might have been proof that Jon Snow's true parents were married on Game of Thrones.

During the scene in question, Samwell and Gilly are pouring over books together when Gilly finds something interesting. Guys, remember when Samwell had to teach Gilly how to read and now she's researching tinfoil hat Game of Thrones theories with the best of Redditors? I just want to commend her on her amazing achievements in life.

Anyway, Gilly finds the log of a particularly prolific maester, Maynard, who recorded every single thing about his life, from the number of steps at the Citadel to the number of bowl movements he makes in a day — and in all that recording, he happened to jot down a secret annulment ceremony he did for "a Prince Rhaegar," during which he "remarried him to someone else at the same time to someone else in Dorne."

She says "a" Rhaegar, but there's only been one in Westerosi history — Rhaegar Targaryen, the eldest son of King Aerys and heir to the throne before he was killed in Robert's Rebellion. And his name should be familiar to Game of Thrones fans for another reason: as Bran learned last season, he's Jon Snow's real father.

The rest of the clues Gilly uncovered all make sense in context. The Tower of Joy, where Jon Snow was born to Lyanna Stark, is located on the northern border of the Red Mountains of Dorne; Elia Martell, Rhaegar's first wife also hailed from Dorne as well. It's entirely possible that Grand Maester Maynard annulled Rhaeger's previous marriage to Elia (which probably would have taken some hefty finagling, given that she'd already produced heirs for him, but the Targaryen family has always been pretty analogous to the Tudors and I guess an annulment for love is better than beheading several of your wives) and married him to Lyanna in secret.

This would mean that Jon Snow isn't just a Stark and a Targaryen bastard — he was born to a legal marriage, making him legitimate. Which also means that as the son of the heir to King's Landing, he technically has a more powerful claim to the throne than even Daenerys Targaryen does. After all, Westeros is all about male heirs, and even though Daenerys is technically older as his aunt, his father would have been the king before she was.

Let's just hope that Gilly remembers that little tidbit of information when Bran inevitable lays Jon Snow's heritage out on the table somehow, so she can be the one let Jon know that he's probably a full on Targaryen. I mean, I guess Sam could be the one to remember it, but given how Gilly was so rudely interrupted by Sam's temper tantrum, I'd like to see Game of Thrones reward her instead of him. See, Samwell? This is what happens when you don't listen to women. They get to be cooler than you.