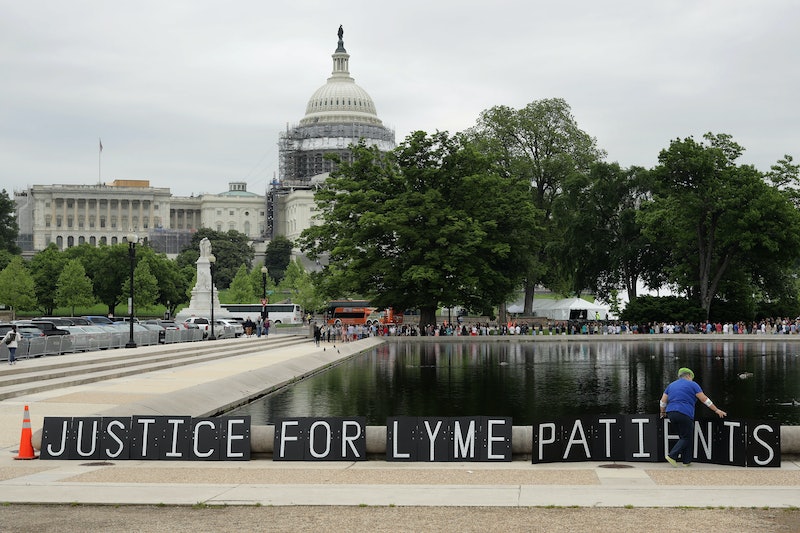 A new report suggests that Lyme disease and climate change are linked, as climate change encourages deer ticks, which carry the disease, to thrive. According to the reporting from the Center for Public Integrity, and re-published in Mother Jones, the Centers for Disease Control claims that during a 12-year period, global warming has resulted in an alarming rise in mosquito, flea, and tick-borne illnesses.

In Maine, a popular summer destination for nature lovers, ticks have become so prevalent that people reported finding them crawling on their legs as early as May, and also found deer ticks "encroaching on roads, beaches, playgrounds, cemeteries, and library floors," Kristen Lombardi and Fatima Bhojani reported for the Center for Public Integrity. Of the 15 types of ticks found in Maine, the increase of the Lyme-disease carrying deer tick, which has resulted in a 20-fold increase of Lyme disease since 2000, is of particular concern. Today, Maine is now the number-one state in the nation when it comes to reports of Lyme disease, according to this investigation. Furthermore, the Washington Post also reports that Lyme disease, which was once solely associated with the Northeast, has now been found in all 50 states and Washington, D.C.

A 2016 report compiled by 13 federal agencies also found that climate change is playing a big role in the rise of deer ticks, particularly in northern states. The report noted that warmer temperatures are prompting ticks that carry Lyme disease to show up earlier in the year, which increases the length of tick season and puts more people at risk.

With Lyme disease becoming a real threat across the U.S., knowledge is power, and prevention is key. Lyme disease is notoriously difficult to diagnose, according to the Mayo Clinic. "The variable signs and symptoms of Lyme disease are nonspecific and often are found in other conditions, so diagnosis can be difficult. What's more, the ticks that transmit Lyme disease also can spread other diseases at the same time."

Lyme disease is a bacterial infection that is transmitted by deer ticks, and if you're bitten by a deer tick you are at risk for developing this illness. If Lyme disease is treated in its early stages, the disease can be eradicated with antibiotics, according to the Mayo Clinic. But accurately diagnosing Lyme disease is generally a process of elimination. Ultimately, a blood test can confirm the presence of antibodies to the bacteria that causes Lyme disease, but this test only shows that a person was once exposed to Lyme disease — not necessarily that they're currently infected with it. The blood test, in conjunction with symptoms such as a bulls-eye shaped rash, joint pain, fatigue, and more will ultimately help a doctor diagnose you.

If you've recently spent time outdoors and you develop a bite that is accompanied by symptoms that include a rash and flu-like symptoms, see your doctor right away. However, even if you fully recover from Lyme disease, it's not like chicken pox where once you get it you're immune to contracting it again. You can get Lyme disease multiple times, and if it's not treated, it's possible to develop Late Stage Lyme disease, which happens when bacteria from Lyme spreads to the nervous system.

Considering that the effects of climate change aren't going to go away anytime soon, the best way to prevent getting Lyme disease is to avoid getting bitten by ticks. The Mayo Clinic suggests covering up completely when hiking in wooded or grassy areas, using insect repellants, checking your body and your pets for ticks regularly, and removing any ticks you do find with tweezers as soon as possible.

While studies are ongoing, evidence from the Lancet Countdown Climate and Health Report, a coalition of 24 academic and government groups, suggests that deer ticks could start showing up a few days to a few weeks in the season as temperatures continue to increase. So, even if you're going on a late winter or early spring hike or camping trip, you're still vulnerable to Lyme disease. The bottom line? It's up to you to protect yourself, and it's always better to be safe than sorry.