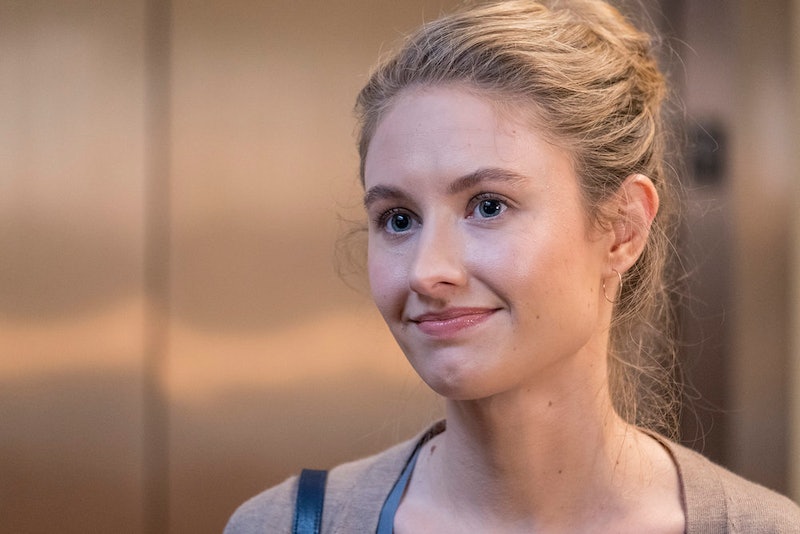 If, during "The Graduates" episode of This is Us you were wondering who that blonde girl at Kate's graduation ceremony was, you weren't alone. The bubbly personality who created the "Commence-mint" signature cocktail (AKA, a mojito) for the special occasion is Kate's best friend Madison. Although they haven't always been friends, Madison has been around since the show's first episode and it's just been a while since she last appeared on screen.

Initially, Madison was known as Kate's Overeaters Anonymous nemesis. the girl whom Kate felt didn't have a valid reason to be there. If you reach way back in your memory, you might recall that Kate and Toby actually first bonded over their shared resentment of Madison. They laughed and made light of the stories she shared about her personal struggles with food.

During one meeting in particular, Madison recalled pridefully resisting hors d'oeuvres of mini-pizzas with gorgonzola and pear, her "absolute favorite," and that's when Kate had enough. She stood up to verbally attack Madison, minimizing her experiences. "People that come here have problems. Real problems with real issues," Kate said angrily. "Screw you, Madison."

Timid, Madison didn't respond until reaching the parking lot after the meeting's end, where they bickered some more, both slamming their car doors in rage before driving away. That's when Kate — who had just discovered her pregnancy — backed into Madison's car. Madison got out kicking and screaming even louder to find Kate an emotional mess behind the wheel. Confused, she asked Kate if she was hurt. "I'm fine," Kate said. "It's just, I'm pregnant."

Madison was elated to hear the news, and they became closer after that, but Kate still didn't fully understand Madison's eating disorder. They went wedding dress shopping together and Madison ate a few macaroons before disappearing to the bathroom. Later, Kate received a call for help. Madison had passed out and hit her head. Finally, Kate understood that she had been judging Madison unfairly. "I'm sorry I called," Madison said. "I didn't call my family. They'd freak out ... It's new. I mean I used to do it in middle school but I stopped, until a few weeks ago."

That's when they shared a moment of vulnerability, and Kate realized that they weren't as different as she thought they were. "Thank you for taking care of me," Madison said. "You're really nice ... I can't believe it. I finally have a best friend."

Madison went on to be very involved with Kate and Toby's wedding, almost slept with Kevin, celebrated Kate's graduation, and is now at her side during one of the scariest moments of her life. Kate is clinging to her pregnancy with all she has after her water broke prematurely. She's absolutely terrified, but everyone she loves is rallying around her in support, including Madison. At first, it seemed like she was just a minor background character, but she seems to be playing an increasingly large role in Kate's life, which could mean a bigger story is in store for her future.