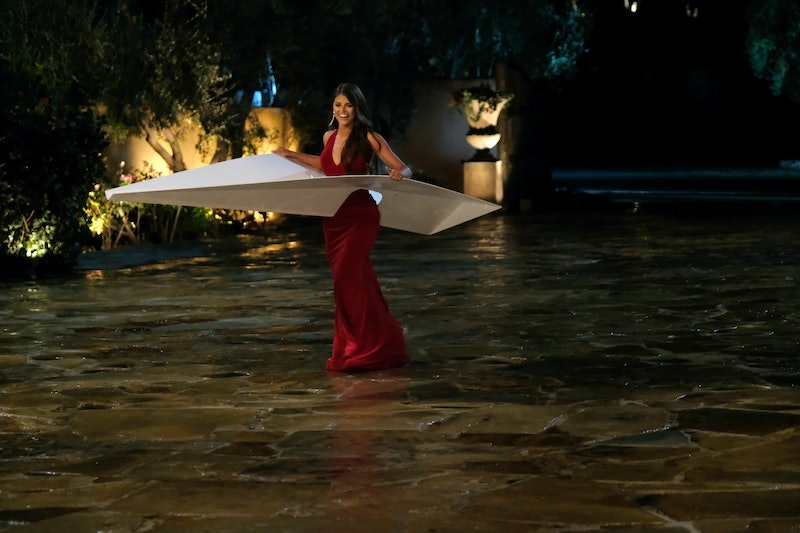 Other women turn up to the Bachelor mansion in a convertible hot rod or wearing elaborate feather wings. But when Madison Prewett meets Pilot Pete for the first time, it’s in a floor-length crimson halter gown and a DIY airplane, like something a kid might wear to elementary school Halloween contest. “My paper airplane is pretty close competition with her red corvette,” Prewett says to the confessional cam in the season premiere of The Bachelor, laughing at herself. “So we’ll see which one Peter likes better.”

For the 23-year-old who Chris Harrison reportedly tipped as a favorite with “a heart of gold”, The Bachelor isn’t her first brush with television. Madison, who goes by Madi, took home $8000 in a 2018 episode of The Price is Right by correctly guessing the price of some grocery store items. She told reporters then that she was still “thinking and praying” about what to do with the money. And if you happened to be watching closely as the Auburn University men’s basketball team secured their berth to the Final Four last year, you might have spied Madi celebrating on the court with the team and her father, the Director of Operations for Auburn Basketball. The sport runs in the family. Madi played basketball for Lee Scott Academy in her hometown of Auburn, Alabama throughout high school, winning the state championships four times. She calls her “daddy” her hero.

An Auburn Tiger herself, the recent graduate now works as a foster parent recruiter for Alabama Mentor, according to her LinkedIn page. Her Instagram account is gingham-tinted and dotted with bible verses that demonstrate a commitment to being of service. Her bio, for example, cites a variation on Proverbs 31:8, “Love greatly, be a voice for the voiceless, and always stand up for what you believe in.” One photo shows Madi serving at Hosanna Home, a Christian recovery center, along with members of the Alabama-based Church of the Highlands. She’s posted about ending human trafficking and serving at the Salvation Army. She’s taken missionary trips to Honduras, Uganda, and Nicaragua.

According to her ABC bio, Madi is “looking for a man who will prioritize faith and family before everything else.” She’s also dead-set on having kids and continuing her missionary work, perhaps even opening an orphanage one day. Despite her pageant past — Madi competed in Miss Teen Alabama in 2014 — she claims that she’d “rather rock a cool pair of Jordans than any heel.”

There’s plenty of talk that Madi hangs around for a lot of Pilot Pete's season. “I had all my fingers crossed that it would be him,” she said in ABC promo. From the outset, it appears the feeling is mutual, with a clip revealing her to be Peter’s selection for the first one on one date. Her quest for love, which starts airing Monday Jan. 6, has already spawned at least three different #TeamMadi fan IG accounts.