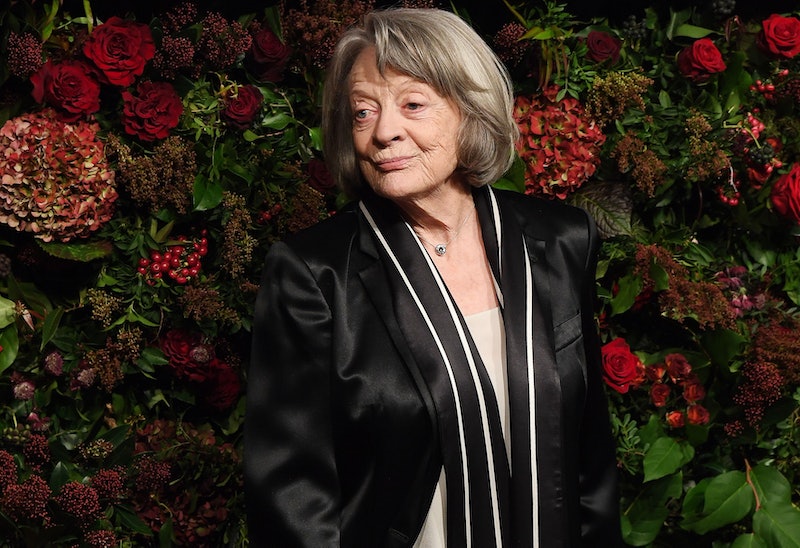 Dame Maggie Smith is such a legend in the world of acting that the mere whisper of her name makes you think of iconic and unforgettable characters. However, the actor's feelings about two of her best known and most beloved roles may surprise you. Yes, can you believe, Maggie Smith says Harry Potter & Downton Abbey weren't "satisfying" for her as an actor.

What?! I know. I also just grabbed my pearls aghast at such a thought. But, you guys, her reasoning is totally legitimate and, TBH, kind of comforting.

Speaking to ES Magazine, Smith explained that, for her, playing Professor McGonagall and the Dowager Countess Lady Violet Crawley was just a little too close to home to feel like too much of a challenge:

"I am deeply grateful for the work in Potter and indeed Downton but it wasn't what you'd call satisfying, I didn't really feel I was acting in those things."

Although Smith's turns on the Potter franchise was enormously successful, she went on to add that she kind of felt her role in that film was to simply provide reactionary shots. It's a feeling she shared with the late, great Alan Rickman (AKA Severus Snape) during filming, she said.

Smith spoke about her recent return to treading the boards and how much more worthwhile it has been for her.

"I wanted to get back to the stage so much because theatre is basically my favourite medium, and I think I felt as though I'd left it all unfinished. But there wasn't anything that came along."

A German Life, Smith's new one-woman show, was based on a documentary of the same name, which tells the story of Brunhilde Pomsel. According to the Guardian, Pomsel is best known for working for the infamous Nazi propaganda spinner Joseph Goebbels. Shortly before she died, she spoke to filmmakers about her experience. Despite the show getting rave reviews from publications including The Guardian, Smith explained to ES Magazine that she's long been plagued by feelings of not being good enough:

"[I suffered] doubt, doubt, doubt. I suddenly felt twice as old as I actually was. And also, when you haven't done a show for a long time, there's something pretty dumb about doing it totally on your own"

Does hearing that a multi-award-winning actor still gets imposter syndrome make you feel a heck of a lot of relief? Yeah, me too.

More like this
Everything To Know About The 'Daisy Jones & The Six' TV Series
By Maxine Harrison and Brad Witter
Theo James Would “Love” To Star In George Michael Biopic
By Sam Ramsden
Adam Ali Hopes 'Waterloo Road' Will “Subvert” Queer Misconceptions
By Sam Ramsden
The Song At The End Of 'The Last Of Us' Ep 1 Has A Deeper Meaning
By Sophie McEvoy
Get The Very Best Of Bustle/UK
Sign up for Bustle UK's twice-weekly newsletter, featuring the latest must-watch TV, moving personal stories, and expert advice on the hottest viral buys.