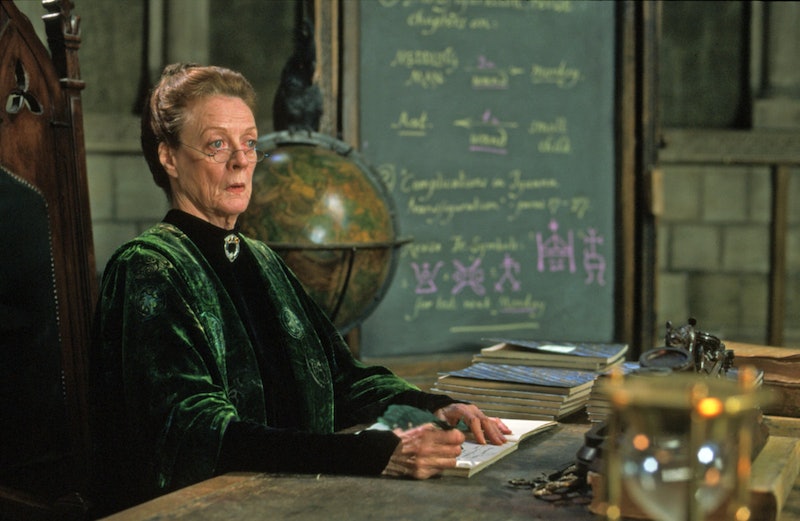 There are a ton of underrated characters in the Harry Potter series that don't get the credit that they deserve. Yes, Harry and Dumbledore are cool, but can we pay some attention to other characters? Specifically, can we take a minute to talk about how cool Minerva McGonagall is?

If McGonagall isn’t already your favorite Hogwarts professor, take a minute to reevaluate. As deputy headmistress, Dumbledore obviously trusts her to be able to handle herself and protect the school if things start to get real, which is a pretty good recommendation. She’s an Animagus, a longtime member of the Order of the Phoenix, and an extremely competent dueler (remember her showdown with Snape in Death Hallows?). Oh, and she’s also pretty hilarious, albeit in a very cross, deadpan way.

If you can’t tell, I kind of idolize Professor McGonagall. And I think that because she isn’t quite as flashy as some of the other characters we forget how incredibly awesome she is! But it’s time we show a little love to our favorite Transfiguration professor. I’ve found seven of my personal favorite Minerva McGonagall moments throughout the series that I think perfectly sum up why she’s my co-favorite Hogwarts professor (I can’t choose between her and Severus Snape!).

1. When She Spooked Mr. Dursley

As he pulled into the driveway of number four, the first thing he saw - and it didn't improve his mood - was the tabby cat he'd spotted that morning. It was now sitting on his garden wall. He was sure it was the same one; it had the same markings around its eyes.

The cat didn't move. It just gave him a stern look. Was this normal cat behavior? Mr. Dursley wondered.

Even though the first time I read Sorcerer's Stone I didn't actually know that the cat in question was McGonagall yet, I still loved the idea of a cat looking sternly at Vernon Dursley. So, when we find out that the cat is actually the equally-stern McGonagall, it makes rereading the scene even more hilarious. McGonagall has mastered a disapproving look even as an animal.

2. When She Proved She Has No Time For Nonsense

"It certainly seems so," said Dumbledore. "We have much to be thankful for. Would you care for a lemon drop?"

"A lemon drop. They're a kind of Muggle sweet I'm rather fond of."

"No, thank you," said McGonagall coldly, as though she didn't think this was the moment for lemon drops.

McGonagall was sassy from the very beginning of the series. She just does not have time for nonsense, even from Albus Dumbledore. I love the image of the most powerful wizard in history offering her a piece of candy and her just being like, "I do not approve of eating candy right now." Even Dumbledore isn't immune to her sass.

3. When She Got A Little Tipsy

Harry watched Hagrid getting redder and redder in the face as he called for more wine, finally kidding Professor McGonagall on the cheek who, to Harry's amazement, giggled and blushed, her top hat lopsided.

After all that sternness, we finally see the more giggly (and possibly drunk) side of McGonagall. Is it even possible to read this passage without being part shocked and part delighted? McGonagall getting drunkenly kissed by Hagrid? I'm sure there's a piece of fanfiction on the internet about this.

4. When She Threw Serious Shade At Professor Trelawney

"I see," said Professor McGonagall, fixing Harry with her beady eyes. "Then you should know, Potter, that Sybill Trelawney has predicted the death of one student a year since she arrived at this school. None of them has died yet. Seeing death omens is her favorite way of greeting a new class. If it were not for the fact that I never speak ill of my colleagues -" Professor McGonagall broke off, and they saw that her nostrils had gone white. She went on more calmly, "Divination is one of the most imprecise branches of magic. I shall not conceal from you that I have very little patience with it. True Seers are very rare, and Professor Trelawney..."

She stopped again, and then said, in a very matter-of-fact tone, "You look in excellent health to me, Potter, so you will excuse me if I don't let you off homework today. I assure you that if you die, you need not hand it in."

— Harry Potter and the Prisoner of Azkaban

The shade, Professor McGonagall. It's no secret that McGonagall doesn't think much of Professor Trelawney (apparently she doesn't know that Trelawney occasionally gets things right), but to throw that much shade at another professor right in front of your students? Obviously McGonagall does not have time or patience to pretend she likes Trelawney and I love that about her.

5. When She Suggested The Students 'Let Their Hair Down'

"The Yule Ball is of course a chance for us all to -er- let our hair down," she said in a disapproving voice.

Lavender giggled harder than ever, with her hand pressed hard against her mouth the stifle the sound. Harry could see what was funny this time: Professor McGonagall, with her hair in a tight bun, looked as though she had never let her hair down in any sense.

— Harry Potter and the Goblet of Fire

"Everyone is going to go to a giant party and have a great time, " McGonagall said disapprovingly. While we know that McGonagall occasionally lightens up (see her happily receiving Hagrid smooches above), it's still pretty funny to imagine her cutting loose at a dance, or encouraging students to do likewise. If I were Lavender I would probably giggle too.

6. When She Put Professor Umbridge In Her Place

"I was just wondering, Professor, whether you received my note telling you of the date and time of your inspec-"

"Obviously I received it, or I would have asked you what you are doing in my classroom," said Professor McGonagall, turning her back firmly on Professor Umbridge. Many of the students exchanged looks of glee. "As I was saying, today we shall be practicing the altogether more difficult vanishment of mice. Now, the Vanishing Spell - "

"I wonder," said Professor McGonagall in cold fury, turning on Professor Umbridge, "how you expect to gain an idea of my usual teaching methods if you continue to interrupt me? You see, I do not generally permit people to talk when I am talking."

Dolores Umbridge, let this be a lesson to you: you may be a power-hungry nutjob hell-bent on ruining the lives of Harry and his friends, but you should know better than to mess with McGonagall's job. In her classroom McGonagall suffers no fools, and that includes other professors. Watching Umbridge get a taste of her own rude medicine is glorious.

7. When She Shows Her Power

Professor McGonagall moved faster than Harry could have believed: Her wand slashed through the air and for a split second Harry thought that Snape must crumble, unconscious, but the swiftness of his Shield Charm was such that McGonagall was thrown off balance. She brandished her wand at a torch on the wall and it flew out of its bracket: Harry, about to curse Snape, was forced to pull Luna out of the way of the descending flames, which became a ring of fire that filled the corridor and flew like a lasso at Snape -"

This is the moment I had been waiting for the entire series. I knew McGonagall was a badass, powerful witch, but we don't typically see her let loose and show her power. So when she battles with Snape and whips out some next-level spell work, I can't help but whisper a tearful, "Yaaaas, Queen" to myself. THIS is why you don't mess with Minerva McGonagall.