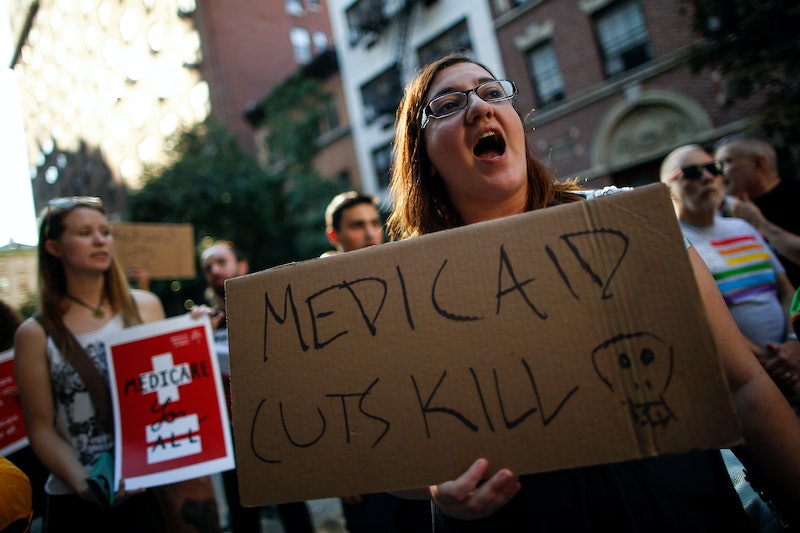 Republicans are losing on health care not just in Washington, D.C., but at the ballot box too. Maine's Republican governor has vetoed the Medicaid expansion five times since the Affordable Care Act passed in 2010. Now voters had the opportunity to overrule that decision, and they did so resoundingly. Maine is the first state to expand Medicaid by referendum. The measure to expand the government health care program passed by what looks to be more than 17 percentage points as the last results trickle in.

That makes Maine the 32nd state to expand the program. D.C. also has. The way the Affordable Care Act was written, states were to expand the Medicaid threshold to residents living at about 138 percent of the poverty line. But thanks to a split Supreme Court decision in 2012, that part of the law became optional. That meant that Democratic states moved forward on enacting this provision, while many red states didn't. Maine, which tends to be more purple, ended up with a legislature that voted in favor of the expansion, but a Republican governor who would veto those bills.

Now the voters got the final say. Any individual making $16,643 or less, or a family of four making $24,600 or less will now qualify for Medicaid in the state. All of the money comes from the federal government at first, and then 90 percent over the long haul—quite a deal for state governments.

Nevertheless, there has been plenty of resistance, including in Maine. Gov. Paul LePage tried to have the expansion labeled as "welfare" on the ballot in order to grow opposition. "It’s free health care paid for by the taxpayers, and it’s got to be said that way,” LePage told local talk radio WGAN in August. “It’s pure welfare. If you don’t want to call it welfare, call it an entitlement.” In the end, the question was pretty straightforward:

Do you want Maine to expand Medicaid to provide healthcare coverage for qualified adults under age 65 with incomes at or below 138% of the federal poverty level, which in 2017 means $16,643 for a single person and $22,412 for a family of two?

Then when that didn't work, opponents played the welfare card via direct mail. Welfare to Work PAC, which was registered by a former aide to the governor, sent out misleading mailers to voters in the state that made claims about job cuts, cuts to nursing homes, and claimed that there would be "no increase in health coverage."

They also tried to push the difference between the popular program for seniors, Medicare, and Medicaid. "MediCAID, Question 2, is welfare expansion; not MediCARE...they are separate programs," the mailers read.

Maine has been a key state in the debate in Washington too, as Republican Sen. Susan Collins has been one of the key GOP votes preventing a bill to repeal and replace Obamacare from moving forward. One of the reasons she gave for opposing the Republican health care plans were drastic cuts to Medicaid.

That led to a strong show of support for the senator in the state. Collins was met at the airport with a standing ovation one time that she returned from D.C. "It was very encouraging and affirming, especially after arriving home after a very difficult time," Collins said at the time. She did not take a position on Question 2 on Tuesday.

Tuesday's win for Medicaid expansion in Maine could inspire activists in other states like Alaska, Idaho, and Utah to look into the ballot box as a way to make the expansion happen in their states. Another 18 states have not yet expanded coverage, but Tuesday could mark a turning point in that fight.