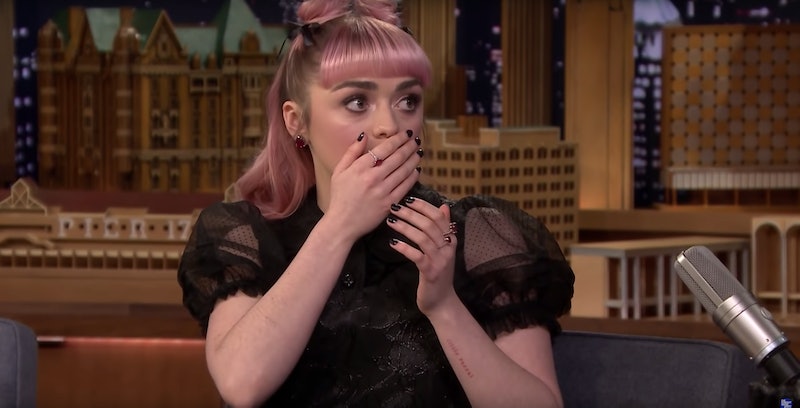 As hilarious as April Fool's jokes can be, boy can some toy with your emotions — especially when you're a GoT fan. During an interview on The Tonight Show With Jimmy Fallon, actor Maisie Williams dropped a major Game of Thrones spoiler during an April Fool's prank in what Huffpost have rightfully deemed an Emmy-worthy performance. Before that moment, Fallon asked Williams to list her top five iconic moments as Arya Stark. Unsurprisingly, the actor has many that include watching her father Ned (played by Sean Bean) being executed in season one, threatening the Hound in season three, throwing away her original costume in season five, and reuniting with Sansa (played by Sophie Turner) in the last season.

The late night host then grilled Williams for some deets regarding the eighth season, asking whether or not she's actually allowed to say anything about it. Williams gave in, and began to talk about the final days of shooting and how emotional it was to say goodbye to everyone, especially when she "found out that Arya died in the second episode." Um, excuse me?

Almost immediately the audience gasped while William's eyes go wide as she clasps her hands to her mouth. Jimmy doesn't know what to say, and neither do I TBH. Williams then asked Fallon if the interview is live, her hands trembling and tears gathering in her eyes as she requested for that to be edited out. She repeatedly apologises to Fallon, and proceeds to walk off the set in embarrassment as Fallon tries to salvage what just happened. The host then walked toward the stage curtain where he grabbed Williams and they revealed that this was all indeed an April Fool's prank.

For now, it looks like Arya is safe for the first couple episodes at least... or is that was William's wants us to think? You know how cruel Game of Thrones can be. What if, as Digital Spy points out, that "Arya doesn't die in episode two of the upcoming season when she actually does"? Now that would be a cruel joke.

It also doesn't help when reading what William's has said about her final moments on the show and the emotional impact it had on her. "This whole season was really, really emotional," the actor told S/ Magazine. "When I came to shoot my final scene, I had already watched a lot of people wrap and seen all the tears and heard all the speeches. It was just a really beautiful day, and a really great final scene for me. It felt like the right time to say goodbye to Arya." Take of that what you will, but the saying "goodbye to Arya" part could have multiple connotations, just saying.

Anyway, enough of the speculation. As poignant as William's final moments on GoT were, she's already looking forward to what the future will hold. "What's hit me the most about the show ending isn't the show ending," she told Rolling Stone for her joint feature with Sophie Turner. "It's like, I'm free. I can do anything now. It's like a moment where you can just really enjoy everything that you've worked hard for. These last six months, I've really done just that."