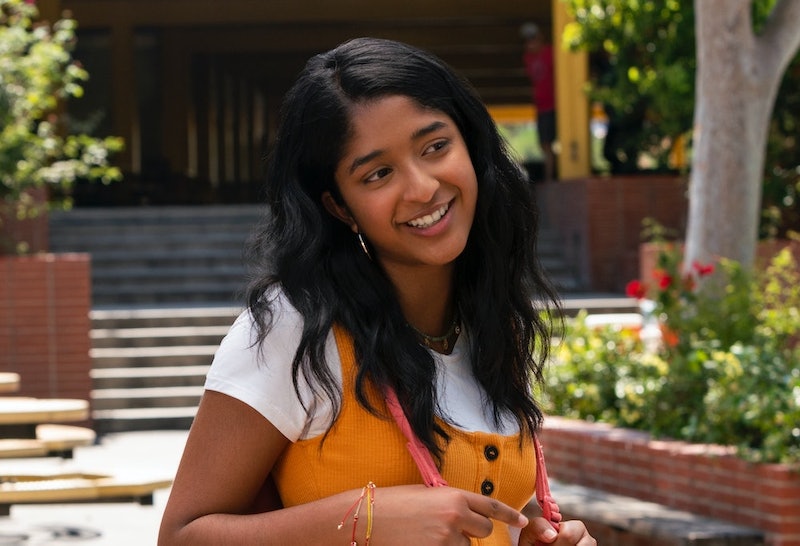 Spoilers ahead for Never Have I Ever Season 1. After a finale with the confrontation of grief and the setup of a love triangle, Never Have I Ever’s Maitreyi Ramakrishnan has some solid Season 2 storyline ideas for her character, Devi. Netflix has yet to announce whether the John McEnroe-narrated coming of age series centered on an Indian-American teen will be renewed for a sophomore season, but Mindy Kaling and Lang Fisher’s hit series about the travails of adolescence and parental loss ended with several cliffhangers. Given its critical success, a second season is likely (Fisher is optimistic about it, too) — and its breakout star has ideas for Devi’s future.

In an interview with Variety on May 3, Ramakrishnan outlined three major points she hopes Devi will be able to explore in another season. The first? To be more appreciative of her friends and family. “Her friends really are her day ones. And also understanding where her mother’s coming from,” Ramakrishnan said. “That is something that we’ll be able to have a lot of audiences relate to, understanding where our parents are coming from even though they might not go about doing certain things the best way possible.”

She also hopes Devi will better confront her grief after the death of her father, Mohan (Sendhil Ramamurthy): “Confronting it, having that battle, even though it’s something uncomfortable to think about, [but] actually just running toward it and facing it, dealing with it head on.” Lastly, she wants Devi to embrace her Indian culture, “because that is so important in a world where identity is everything,” Ramakrishnan said. “It’s how you portray yourself. It’s how you show yourself to the world and how everybody will view you, but also how you accept yourself.”

The breakout star also reflected on the series’ groundbreaking South Asian lead character. “I can speak for myself here when I say that we’re so used to being sidekicks, we’re so used to being comedic relief,” she said. “Suddenly, all you’re doing is you’re seeing yourself as a sidekick, as not as important. And when you do relate to a character, they’re usually Caucasian and then you realize you’re living your life in the shadows as a person of color and you’re only able to see yourself through white characters.”

The series has certainly resonated with viewers. Since its April 27 premiere, Never Have I Ever has been the No. 1 Netflix film in the U.S., Canada, France, India, and more. Kaling celebrated its success on Instagram on May 2. “I’m truly in shock. I can’t believe that our show about a complicated little Indian family has been seen by this many people,” she wrote. “We love you guys!”