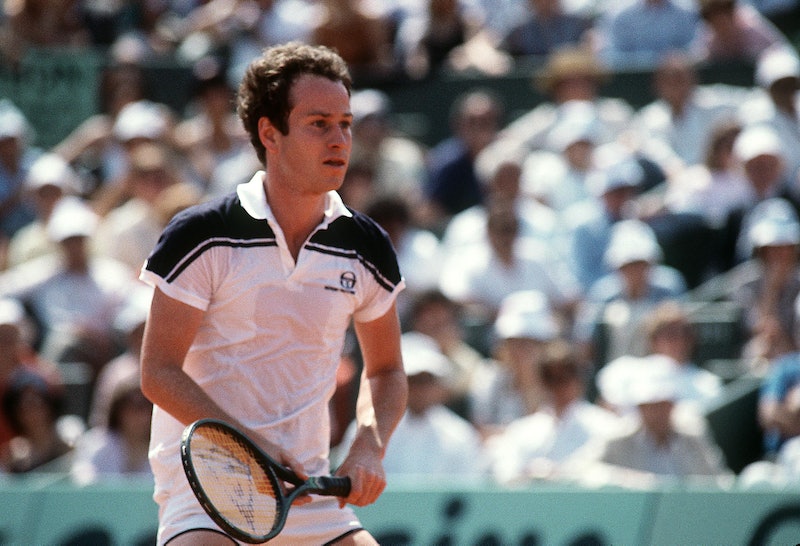 Spoilers ahead for Never Have I Ever Season 1. Though Never Have I Ever features Devi (Maitreyi Ramakrishnan) getting attacked by a coyote, propositioning a hot jock, and living in a rock 'n roll tribute room, the strangest thing about the whole show is that tennis player John McEnroe narrates it. He feels like a strange addition to a YA dramedy, but as the season progresses, the reason for his inclusion begins to click into place: as with much of the show, it all goes back to Devi's dad.

John McEnroe was a world-class tennis player during the 1970s and 1980s. According to the International Tennis Hall of Fame, he won 77 singles titles, 72 in doubles competitions, and was ranked number one in the world in both categories at the height of his career. His talent was undisputed, but McEnroe was also a controversial figure who was prone to fiery outbursts. During a 1981 match against Tom Gullikson, he ended up bellowing at the umpire after he called McEnroe's shot out. “You cannot be serious, man. You cannot be serious! That ball was on the line, chalk flew up. It was clearly in," McEnroe famously yelled. “You guys are the absolute pits of the world."

This outburst followed McEnroe for the rest of his career and cemented him as someone who was obviously talented but quick to anger — making him the perfect analogy for Devi, a smart student who often lets her temper get the better of her. In one flashback, Devi walks in on her dad watching that same 1981 match. "Look at him giving it back to that umpire," Mohan admiringly says to Devi. "He's a firecracker…just like you."

McEnroe told Vanity Fair that Mindy Kaling approached him about narrating the show at Vanity Fair's 2019 Oscar party, and that Kaling likely came up with the idea because her parents, like Mohan, were fans of his. But McEnroe's involvement is also a way to neatly tie-in Devi's constant outbursts to the rest of the story. Devi only knows about McEnroe because of her dad, and Mohan was one of the only people in her life who she felt accepted her, even with her temper. In the wake of his death, Devi constantly lashes out, and McEnroe's narration acts as an all-consuming reminder that her anger is intensified by her grief. Mohan saw value in both Devi and McEnroe's passionate natures, but without him there to guide her, Devi begins to detonate her other relationships. McEnroe's narration is humorous – he snarks at Devi during Ganesh Puja and claims Devi's blowup at Fabiola is a "logical response" for "hotheads" like them — but it's also a crutch. Would McEnroe even be there "enabling" Devi if she was actually able to acknowledge her father's death in a healthy and meaningful way? Probably not.

The fact that McEnroe acts as a meta-commentary for Devi's grief makes it all the more fitting that Devi meets up with the real McEnroe in the final episode. Once Devi accepts that her dad is truly gone, she's able to drop all pretense and grieve with her mom out loud, allowing McEnroe to manifest before her in a symbolic gesture. He'll likely continue to narrate the show in potential future seasons — overcoming grief is a constant journey — but him appearing in the flesh is a sign that Devi has taken a solid step towards healing.

McEnroe's appearance as a wisened older man also hints at how Devi could grow in potential future seasons. As the 61-year-old told Vanity Fair, he was fine with Kaling using his famous outburst in the show because his later ESPN tennis commentating let people see that he wasn't "just that person that they saw screaming at the umpire." Devi may be a hothead, but her anger doesn't define her, and a potential Season 2 could see her finally grow into the happy young woman her dad wanted her to be.