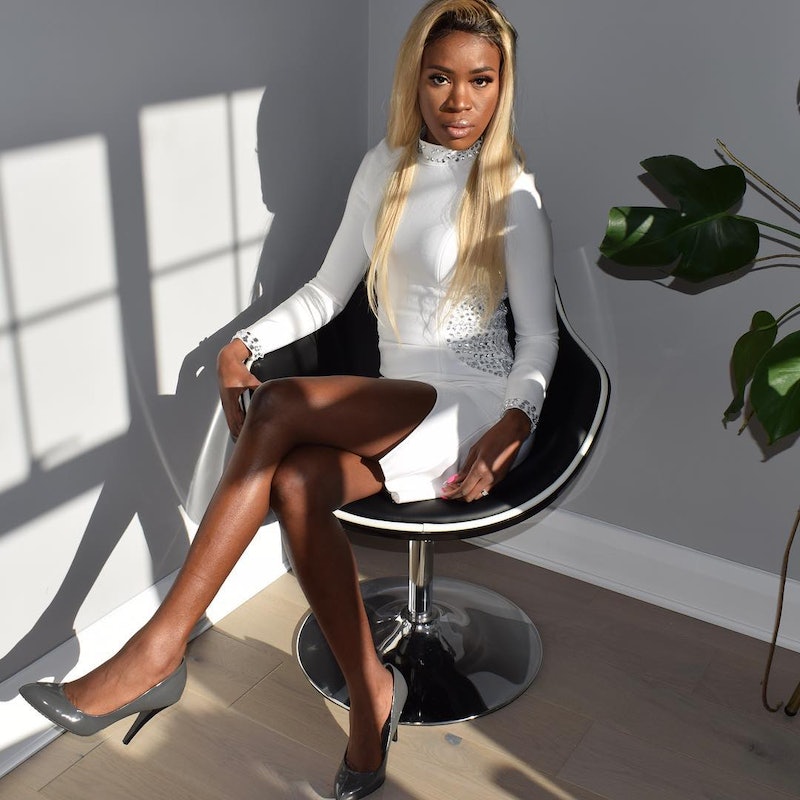 Some would dismiss makeup as contributing to unrealistic beauty standards, and there is certainly valid criticism of the way cosmetics can contribute to these harmful ideas of beauty. But Makeup Addiction founder Djimbi Djevdet has used makeup not as a way to embrace beauty standards, but as a way to cope with chronic illness and champion inclusivity. Djevdet's diagnosis with fibromyalgia sparked a love a makeup and is why Makeup Addiction exists today. All in all, Djevdet is a female-founder able to inspire.

With 1.2 millions followers on Instagram and a growing collection of cosmetics to add to the brand's core of makeup brushes, Makeup Addiction just keeps on growing —and there's even more for the brand on the horizon. With upcoming launches like new eyeshadow palettes and complexion products, there's a lot for fans of the brand to look forward to in the future. But it's Makeup Addiction's beginning and Djevdet's journey to where she is now that offer an inspiring look at the power of makeup.

In 2012, Djevdet had recently married and was finishing her graduate degree in education. Just four weeks before her graduation, Djevdet found herself suddenly unable to work. After countless doctor's visits, hospital stays, and testing, Djevdet was diagnosed with fibromyalgia. It was during her time in the hospital that she found makeup tutorials while browsing YouTube.

Following her diagnoasis and release from the hospital, Djevdet was still having difficulty walking. Despite her restricted activity level, Djevdet says she didn't want to simply "watch TV," so instead when she returned home, she began putting the makeup tutorials she watched while in the hospital into action.

Djedvet's love of makeup and tutorials led her to realize just how expensive makeup tools could be. That's when she put her newfound passion into action. A few months after Djedvet was released from the hospital in 2012, she launched Makeup Addiction, named so because she was "obsessed and addicted" to makeup. She begin her company by launching a set of six bamboo brushes. Djedvet herself spent hours reaching out to the same influencers she had watched while in and out of the hospital. Fast forward and those beauty bloggers were positively reviewing her products leading to total sell-outs before the items even launched.

Djevdet re-invested the money she made from the sell-outs into the brand by launching new products. Makeup Addiction has grown exponentially ever since. ith the continual sell-outs, Djedvet re-invested the money into the company, which has grown exponentially since its initial launch in 2012. The brand's success is not simply because of influencers and bloggers, though. The growth is a result of Djvedvet herself and her approach to inclusive beauty.

"Everyone should be represented," Djevdet tells Bustle, and her brand is a reflection of this belief. She goes on to explain that her husband is white and her children are biracial. Her diverse family, including her in-laws and her own extended family, has made inclusive products a must for Makeup Addiction. In fact, she explains that as the product developer for the company, she frequently tests on her light-skinned husband and his family as well as on she and her cousin's own deeper complexions.

"I want to make sure I get both spectrums because I feel like beauty has no color," Djevdet says. "I would make sure to represent every single skin tone to make sure that everyone can come to our brand and find a color eyeshadow that is going to show up on their skin tone."

In fact, Djevdet won't even commit to creating a product if it doesn't work for everyone. But it's not just her products that champion diversity. If you take a glance at the Makeup Addiction Instagram page, which Djevdet calls a, "no hate zone," you'll see the diversity of the brand represented there as well with both men and women of different complexions being featured.

As for Djevdet's fibromyalgia diagnosis, the pain of the condition is no longer something she battles. She explains that through traditional medicine from her home country of Senegal, she has been free from fibromyalgia pain over five years. While this is not the typical result for many who receive the same diagnosis, Djevdet still has words of encouragement for those facing chronic pain.

"It’s a really dark place, but just stay strong, keep the positivity around you," Djevdet says, "Keep your family close, your friends close so they can be nice and supportive. The pain, it will go away. You will be back to your normal self again in due time, but it’s just staying strong."

With a focus on inclusivity and a message of empowerment, Djevdet and Makeup Addiction are proving that makeup is so much more than just products.

More like this
The 4 Best Lash-Growth Mascaras
By Nina Bradley
The 6 Best Talc-Free Setting Powders
By Maria Del Russo
E.l.f. Cosmetics’ Halo Glow Liquid Filter Is My New Dewy Skin Essential
By Olivia Rose Ferreiro
July’s 13 Best Beauty Launches, According To Our Editors
By Bustle Editors
Get Even More From Bustle — Sign Up For The Newsletter