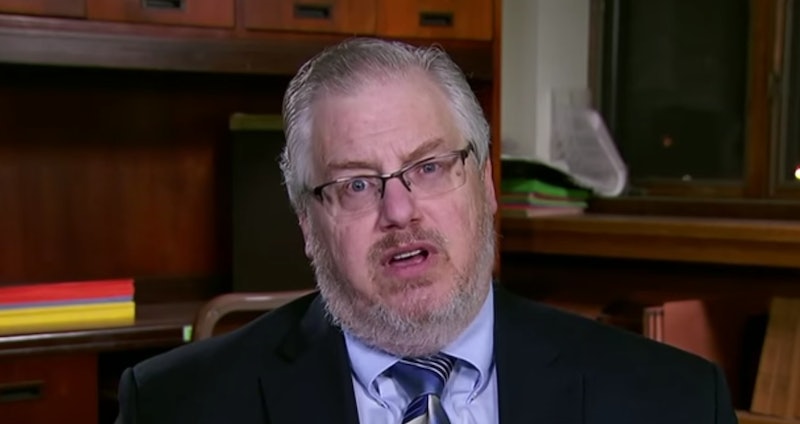 If you're one of the millions of people who got sucked into the engrossing Netflix documentary series Making a Murderer a couple of years ago ― it debuted back in November of 2015 ― there's a good chance you're eagerly anticipating the follow-up series from filmmakers Moira Demos and Laura Ricciardi, which is due out sometime this year. Which is why it's no surprise that a familiar face from the first series is making his case against Avery now: Making a Murderer's Ken Kratz has a new book coming out, arguing for Avery's guilt in the high-profile murder of Teresa Halbach.

Kratz, who was the district attorney for Wisconsin's Calumet County for 18 years before being resigning in 2010, has long had no patience for theories about Avery's innocence. He's appeared on more than one TV news show since the release of the first series, giving his take on why the once wrongfully-convicted Avery actually did commit the crime this time around, and why he believes that his nephew, Brendan Dassey, should also spend the bulk of his life behind bars.

The audience, when they were angry about what happened, have every right to be angry and in fact, if it happened in the way Making a Murderer showed, I’d be angry too, but it didn’t. It didn’t happen that way.

These arguments are tackled in Kratz's new book on the subject, titled Avery: The Case Against Steven Avery and What "Making a Murderer" Gets Wrong. The book was released on Tuesday, Feb. 21, and is currently for sale. While you'll have to take a look at it to learn Kratz's full argument, a few released excerpts have teased out some of his takes.

For instance, as he's insisted publicly since the series came out, he's particularly upset by the portrayal of the discovery of the infamous vial of Avery's blood, arguing that the box it was in was opened during his 2002 appeal of his earlier wrongful rape conviction, and was not an indication of alleged tampering. Furthermore, Kratz alleges that the hole in the vial's stopper was made by a nurse when the blood was being inserted, not an investigator scheming to plant evidence, as the documentary suggested it could be.

We see close shots of the broken seal on the box that contains the vial of blood. We do not hear that the seal was broken in the presence of Avery's own Innocence Project defense team in 2002, in a meeting to review the available physical evidence for retesting in pursuit of his eventual exoneration. We do not hear that the hole in the top of the tube was actually made by a nurse when the blood was first collected from Steven Avery, not by some phantom police conspirator. This is how all blood gets into collection tubes, as you are probably aware if you have ever had blood drawn yourself.

Kratz is also unconvinced by the advocacy for Dassey, whose conviction was overturned late last year (although he still sits in prison pending an appeal by the state).

Here's a quote in which he tackles the issue, saying that it was "not my fault" that Dassey had a low IQ, a fact which his advocates say allowed investigators to isolate him and coerce him into making a false confession.

I lose no sleep over my prosecution of Brendan Dassey. I was a prosecutor with a dead young woman and her surviving family for which to pursue justice. It was not my fault that Brendan was easily manipulated by Avery, or had a low IQ, or was shy, or that he made a dozen inconsistent statements. I believe Brendan could have saved Teresa's life, but chose instead to involve himself in the rape, murder, and mutilation of an innocent woman. I have always said that he did not deserve life in prison, and should have taken the plea bargain that I offered him. But I couldn't, and can't make Brendan's choices for him.

Suffice to say, Kratz ― whose career as a district attorney ended after it was revealed he'd sent lewd texts to a domestic abuse victim, and subsequently underwent treatment for drug addiction and narcissistic personality disorder ― is doing everything he can to voice his certainty of both Avery and Dassey's guilt. There's no specific date yet announced for the second series on Avery, but it's sure to stir up these issues all over again.