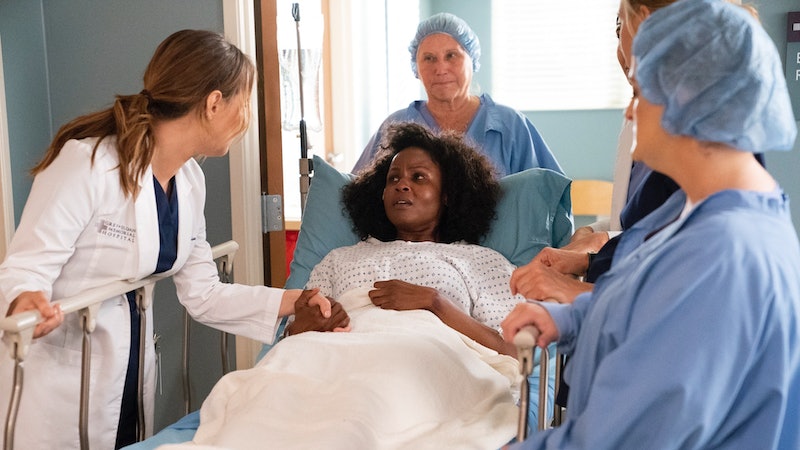 Warning: This article contains information about sexual assault, which some may find triggering. Grey's Anatomy has never been known to shy away from tackling important issues, but the process of making the Grey's rape kit episode, "Silent All These Years," was just as powerful as the plot itself.

The day after the momentous episode, on Friday, March 29, director Debbie Allen shared a video on Instagram of her behind-the-scenes. In the video, Allen was setting up a shot for perhaps the most powerful moment in the episode, in which the women who work at Grey Sloan Memorial lined the hallway to support Abby (Khalilah Joi) as she heads into surgery.

In the video, which was reposted by the official Grey's Anatomy Instagram account, Allen walks down the hallway, explaining to the show's cast, who are lined up along the walls, how she'll move the camera. And because filming the episode's heavy subject matter was difficult, she also ends up leading the cast in an impromptu song and dance, allowing everyone involved to let off a little steam before shooting the moving moment. Allen also shared a photo of "a group hug as we wrapped tonight’s episode of @greysabc," showing the cast of the medical drama being just as touched and emotional as the audience at home by the powerful story.

The episode — which, according to The Hollywood Reporter was written, directed and edited by women — centered on Camilla Luddington's Jo, who searches for her birth mother and discovers that she was the product of an assault. Not only that, throughout the course of the episode, Jo learns that her mother blames herself for the rape because she agreed to go on a date with her attacker, even though she didn't consent to anything else. As a result, Luddington told Cosmopolitan, Jo wants to ensure that her patient, Abby, who has been raped, is supported in all of the ways that her mother wasn't.

"She was coming off the heels of listening to her own mother’s pain, hearing how she wrestled with telling anyone. When she meets Abby, I think she wants to be there for her in a way that she had wished someone had been there to support her mother," Luddington told the magazine about her character's relationship to her patient.

The actor revealed that showrunner Krista Vernoff and producer Elisabeth Finch worked with The Rape, Abuse & Incest National Network (RAINN), in order to ensure that the conversation surrounding assault was as respectful as possible. But, just as importantly, Luddington said that the episode's goal was to send a message to survivors everywhere, telling them that they are supported and believed by the cast and crew of Grey's Anatomy. "In our episode, you see that Abby needed to see a space that felt safe on her way to the OR. For her, that was a group of women, locked arm in arm, supporting her every step of the way."

Luddington continued, "We’ve seen the power of that in the past few years as survivors have stepped forward to share their stories and pursue justice. The people that 'line the hallway' will look different for every survivor of sexual violence, but the support and solidarity is the same."

That show of support and solidarity extended to more than just the episode's plot; Vernoff told THR that many of the women in the hallway scene were not actors. "That hallway contains nearly the entire female writing staff [of Grey's]. It contains exec producers on the show, exec producers in Shondaland, most of our female crew members," she explained. "That hallway is full of women who read that script and wanted to stand there and be a part of this thing. They are not actors. They are holding space in the most beautiful way."

In addition to the powerful hallway scene, the episode features a touching moment where Jo convinces Abby to get a rape kit done, in case she decides to press charges against her attacker in the future, before showing her what goes into processing a rape kit. According to Vernoff, that decision initially received pushback from ABC's Broadcast Standards and Practices team. "The [notes] we got on this script included, 'Please don't show any fluid on the Q-tips' and 'Please don't show any body fluids under the blue lights,'" Vernoff told THR. However, she said, creator Shonda Rhimes, "wrote back a pretty passionate response of the myriad ways that networks are willing to show actual violence but that what we were doing here was the medical process that happens in the wake of violence and they were trying to tell us we couldn't show it." The network eventually conceded, and let Grey's Anatomy air the episode without any changes.

By fighting to tell the story with as much respect and honesty as possible, the Grey's team managed to create an episode that not only sheds a light on the all-too-common issue of sexual violence, but that also helped survivors everywhere that they are not alone. And it seems as if the process of making that episode moved and affected the cast and crew just as much as audiences who watched it.