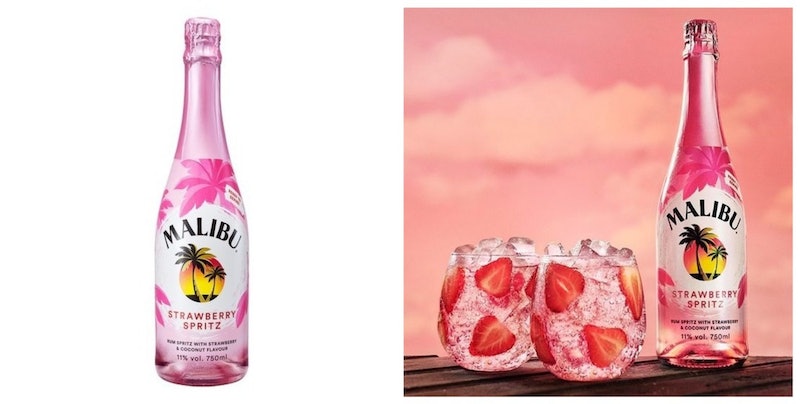 In search of a new boozy beverage to sip by the pool this summer? Malibu has you covered with the new Malibu Strawberry Spritz bottled cocktail. The strawberry-and-coconut-flavored, fizzy, rum-based drink comes in 75cl bottles perfect for sharing with friends — although there’s just one problem: It’s currently only available in the UK. So, uh… who feels like getting in touch with Malibu to let them know that the rest of us who live elsewhere are clamoring for the drink, too?

The drink actually isn’t totally new; it was released about a month ago, hitting shelves exclusively at UK grocery chain Tesco starting on May 20. Now that summer is in full swing, though, the news has finally made its way beyond the UK to the rest of the world — and the timing couldn’t be better. Said Philip Ainsworth, Malibu parent company Pernod Ricard marketing director for the UK branch, in a press release, “Summer is a key time for the Malibu brand as its target consumer looks for Instagrammable, sweet, yet refreshing drinks to enjoy during social occasions,” adding, “We’re delighted to … be extending our current can offering at a time when the ready-to-drink can market is booming.”

Millennial pink? Instagram? Summer? Cocktails? There are so many trends in there, I can barely keep track of them — and Strawberry Spritz hits ‘em all.

Described in the press release as “a sparkling rum-based cocktail bursting with the taste of strawberry and a drop of coconut,” Strawberry Spritz sounds like the perfect pop-it-and-pour-it summertime tipple. According to beverage industry news site Just Drinks, the new Malibu offering is also the brand’s first ready-to-drink cocktail ever to be released in the 75cl bottle format. And when I say, “pop-it-and-pour-it,” I do mean that; like a bottle of champagne or prosecco, it comes topped with a cork which you’ll have to pop in order to open the bottle. Indeed, noted Ainsworth in the press release, the drink “provides an additional element of theatre”; as he put it, “It can be popped like a bottle of prosecco, yet enjoyed and garnished like a pink gin and tonic.” Malibu Strawberry Spritz is 11% ABV and retails for about £9.50 (just shy of $12 USD).

And hey, if you really can’t wait to try Malibu Strawberry Spritz but, alas, don’t live in the UK, good news: The recipe for a similar cocktail is posted right on the U.S. Malibu website. True, it takes a little more effort to make than just popping open a bottle of a ready-mixed cocktail; still, though — in a world without bottled Malibu Strawberry Spritz, it’s a good consolation prize. To make it, all you have to do is grab a bottle of regular Malibu, a bottle of rosé, and some strawberries; mash the strawberries up; and, as the mixing instructions put it, “1. Pour everything into a glass with ice. 2. That’s it, enjoy!” (That’s basically the “That’s it. That’s the tweet” of cocktail instructions, right?)

Now, it’s true that there are a few differences between this drink and the bottled Strawberry Spritz currently available across the pond. For one, this cocktail is technically called the Malibu Rosé Spritz, rather than the Malibu Strawberry Spritz; and for another, it’s not clear whether there’s rosé in the bottled version of the drink (I’m going to guess that there isn’t — if there was, it would probably be a big selling point). It is, however, still a strawberry-spiked, coconut-tinged, rum-based beverage, so I’d consider it a close second.

If you’re in the UK, you can grab Malibu Strawberry Spritz at Tesco. If you’re not in the UK… well, we can always drop Malibu a line and see if they’ll think about bringing the drink to other markets, can’t we? Hope springs eternal, after all.