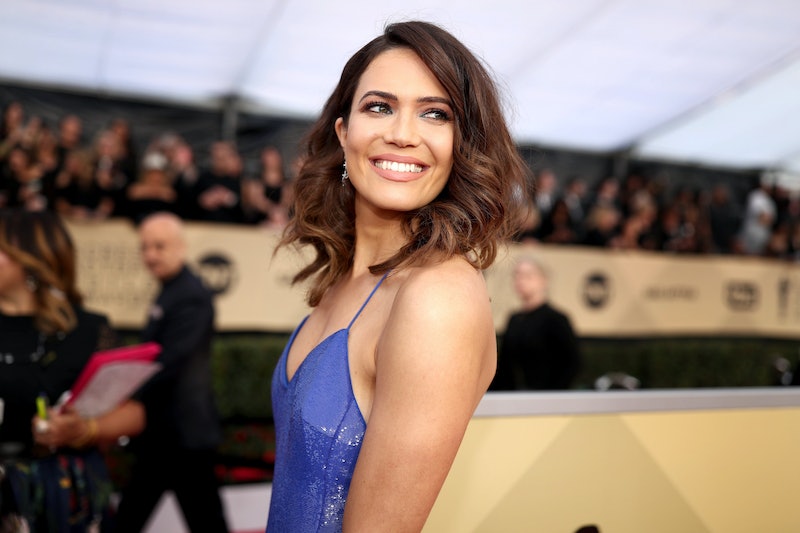 There are a ton of great teen romances that came out of the '90s and early 2000s. Because of that, when we think of them, we're filled with an amazing sense of nostalgia. And one of the greatest romantic dramas to come out of that time period was A Walk to Remember. To this day, fans still get the feels when Landon Carter and Jamie Sullivan are brought up. So those same fans will be happy to hear that Mandy More knows A Walk to Remember just as well as they do, a fact she proved by acing a "This Is Us or A Walk to Remember" quiz on The Tonight Show Starring Jimmy Fallon.

On Sept. 24, Mandy Moore appeared on The Tonight Show to talk about the upcoming season of This Is Us, which premieres on NBC Tuesday, Sept. 25. At one point, Fallon brought up how her characters tend to bring out the "good cries." Considering she's done everything from A Walk to Remember, to Tangled to This Is Us, happy and sad emotions are always prevalent wherever Moore is concerned. But A Walk to Remember is the tearjerker that started it all, the one that gives audiences the type of sobs that bring on snot and a guaranteed ugly face. And Mandy Moore knows it too. "That movie has touched people and still continues to in a way that we never, ever expected. I'm totally flattered." she told Fallon. "I'm slightly flabbergasted that the sort of things in my career that I'm most known for is making people cry. I never would have guessed that in a million year."

The story of Jamie Sullivan falling in love with Landon Carter, played by Shane West, only to have their love story cut short by illness will always make fans tear up. And the same could be said for its most heartbreaking lines. And, since great lines and heartbreak are also things This Is Us also mastered, it only makes sense that Fallon played a game of "Guess The Quote" game with Moore. The rules were simple: Fallon reads a quote and Moore would have to guess wether it came from A Walk to Remember or This Is Us. "If I don't pass this quiz, that doesn't really bode well for me," Moore said when she heard the rules. "It means I'm unprofessional." While we'd never dare think of Mandy Moore in that way, she had nothing to worry about anyway since she nailed the whole thing.

With some romantic accompaniment from The Roots' pianist, James Poyser, Fallon read off the first line: "You have to promise you won't fall in love with me." Like a true fan, Mandy Moore knew what it was right away: "That's definitely A Walk to Remember." Fans will know that while Landon scoffed when Jamie gave him this condition, he did in fact fall deeply in love with Jamie.

Another line from that movie was "I thought I saw something in you. Something good. But I was very wrong." Again, Moore correctly identified the line as from her iconic film. The last two quotes were from This Is Us, which she also got right. So not only does Moore know A Walk To Remember just as well as fans, she also has a pretty good memory of her current show. For the casual viewer, this game might have been hard, but for a super-fan — or Mandy Moore — it was a walk in the park.